Allapattah Flats K-8 Agriculture Program and FFA Chapter are new to the district and have worked hard to make a name for themselves this first year. Below are two big accomplishments the FFA Chapter made this year during the midst of Covid-19. The following contests were coached by the Agriculture Teacher and FFA Advisor Kristen Newell.

On Wednesday, May 20th, three FFA members from the Allapattah Flats FFA Chapter competed in the Virtual Vegetable Evaluation contest. These students had to identify vegetables, insects, and weeds from pictures they were given on the exam. The team placed 3rd in the state and Elizabeth Rufo placed “high individual” for the contest. These students worked very hard and we are beyond proud of them. The team consisted of Elizabeth Rufo, Laurence Blankenbaker, and Jaden Pizzarro. 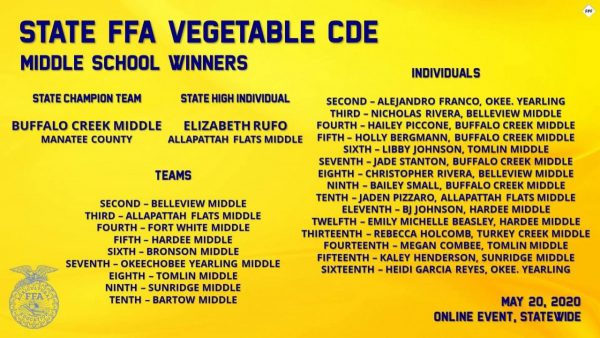 On Thursday, May 21st, four FFA Members from the Allapattah Flats FFA Chapter competed in the Virtual Meat Evaluation contest. The team, which consisted of Elizabeth Rufo, Laurence Blankenbaker, Jaden Pizzarro, and Sebastian Bush, placed 8th in the state. For this contest, they were required to identify various cuts of meat that are bought in a store, place cuts of meat from best to worst according to how much edible meat was on the plate, complete a written exam, and identify parts of a beef and pork carcass based on questions asked. These students worked hard, and we are very proud of their accomplishments this year. 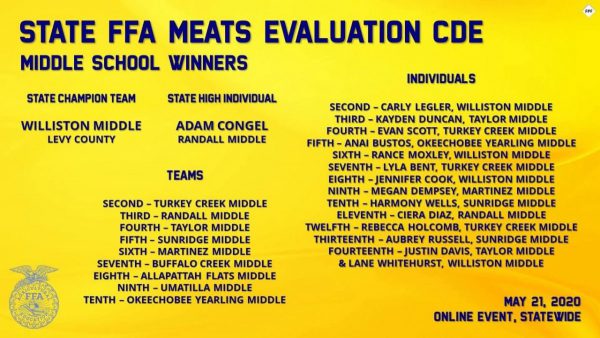