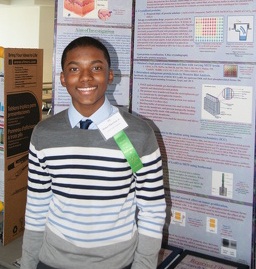 Two Lincoln Park Academy students won four-year scholarships at the recent Intel ISEF International Science and Engineering Fair held in Phoenix, Arizona, for their projects. The students were able to attend the International Fair with support from the St. Lucie County Education Foundation’s Fund A Project, and were able to solicit and raise the funding needed to participate. Junior Robert Bacchus presented his project, “CancAARS: A Novel Therapeutic Target for Melanoma Tumorigenesis,” and won a special award, a four year scholarship to the University of the Sciences in Philadelphia, valued at $60,000.00. Robert also placed fourth in the grand awards for Biochemistry, and was presented a check for $500.00. Neha Kambam Reddy, also a junior, presented her project, “Sustaining Ecological Biodiversity with Highly Specific RNA Interference (RNAi),” and Neha also won a four year scholarship to the University of the Sciences in Philadelphia, valued at $60,000.00. University of the Sciences awards five $15,000 scholarships to students whose research and academic interests align with the USciences mission. Scholarships become effective upon enrollment in the incoming class of Fall 2014. Intel ISEF, the world’s largest international pre-college science competition, is the premier global science competition for students in grades 9–12. Each year more than 1,500 high school students from more than 70 countries, regions, and territories display their independent research and compete for more than $4 million in awards.