Skip to content
Surrounded by his softball team, St. Lucie Public Schools staff, and fans, Roger Mathews celebrated his 500th victory as a softball coach on Tuesday, April 4th. He has supported Lincoln Park Academy’s (LPA) Lady Greyhounds round the bases for the last 14 years. Prior to that, he coached softball at Port St. Lucie High School and John Carroll. In sum, this legendary coach has spent 29 years on the field.
LPA’s Athletic Director Jill Corey presented Mathews with a commemorative plaque and banner on a softball field chalked with special “500” markings in honor of his coaching accomplishment. Sharing a personal account of his career with his wife by his side, Mathews indicated that having no children of his own, his players are like his family, and he looks forward to continue coaching softball and watching his athletes accomplish their goals on and off the field.
Mathews is ten and three for the season as he heads into his last four games for the 2017 season. 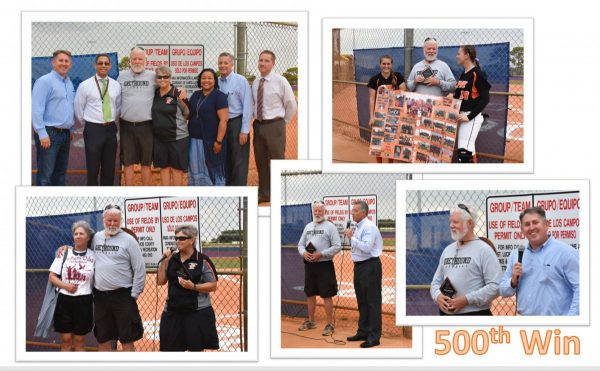