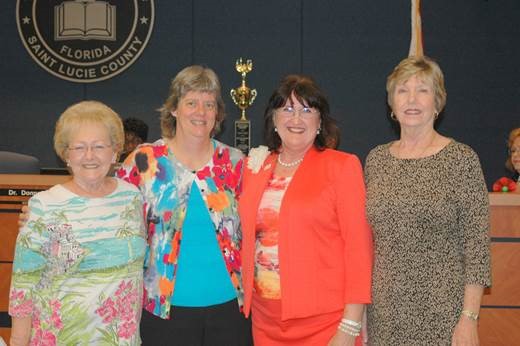 On April 22, 2014, the 100th Anniversary of the Cooperative Extension Service Resolution was read by Kathryn Hensley and adopted by the School Board. May 8, 2014 marked the centennial of the signing of the Smith-Lever Act which established Cooperative Extension, known in the state of Florida as UF/IFAS Extension and Florida A and M University Extension, the nationwide transformational education system operating through land-grant universities in partnership with federal, state and local government. Pictured are, UF Extension Advisory Council Member Pat Alley, School Board Chairman Debbie Hawley, School Board Member Kathryn Hensley and Superintendent Genelle Yost.