Southport Middle School students put on a magnificent performance of the Disney production The Jungle Book for Kids. It all began with an exciting announcement in early January to Mrs. Dusash’s Exceptional Student Education class that all of her students would have an important part to play in the upcoming drama production of The Jungle Book for Kids. According to Ms. Ruby Soto, ESE Para professional and stage hand for the performance, “The students’ enthusiasm was, without any doubt, reflected in their performances” (on March 9, 2017).

Mrs. Dudash’s class, along with many other Southport students, put on a performance that brought tears to the eyes of staff members and laughter to all who were present. The inclusion of ALL students in this performance is what made it so SPECTACULAR.  Drama Teacher and Director A.J. Quinn did an exceptional job teaching an extraordinary lesson that there are no limitations on the stage or in our abilities. Our students, of all abilities, learned to overcome their own fears by proving that with hard work and dedication amazing things can be accomplished, particularly when we work together to do so.

The talent exhibited on stage was inspiring and “limitless.” The immense pride of student success was felt by all. Mr. Quinn, noted that it was “an honor and a privilege to have the opportunity to create such an amazing show with an even more amazing group of people!   The excitement emanating from the stage was palpable and the warmth of that joy was felt by every member of the audience.

A sincere thank you is extended to the faculty, staff, parents, and students who worked so hard to make this production a reality — thank you for “celebrating the bare necessities of life.”

Congratulations to all on a job well done! 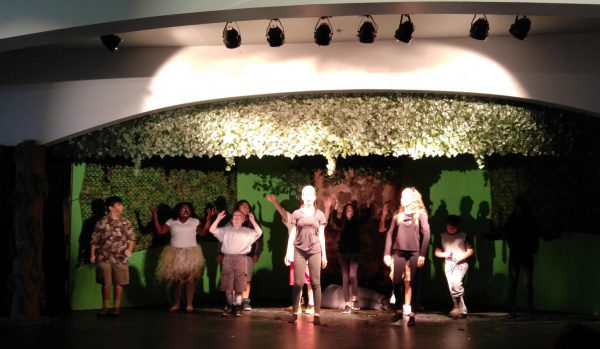