Ft. Pierce, Fla., January 9, 2015 – Film has the Oscar™, music has the Grammy™, science has the Nobel and sports has its gold medals, but what about the true unsung heroes on the frontlines of shaping our future? Where is the recognition for our nation’s educators? Enter Lowell Milken and the Milken Educator Awards.

Nardi Routten, a fourth-grade teacher at St. Lucie County’s Frances K. Sweet Elementary School was surprised with this coveted $25,000 Milken Award this morning during a school-wide assembly in the cafeteria. Presenting the award was Dr. Jane Foley, Senior Vice President of the Milken Family Foundation. Florida’s First Lady Ann Scott and Commissioner of Education Pam Stewart were also in attendance.

Routten stands out for her exceptional passion and dedication for her job as an educator. She is known throughout the St. Lucie School District for dedicating extra time to her students before and after school and even during the weekends. She is highly requested among parents because her willingness and ability to meet each child’s specific needs is widely known. Routten’s students routinely score the highest in her school and throughout the school district on standardized assessments. She is National Board Certified and is currently pursuing a master’s degree in reading.

Routten was caught by surprise when her name was announced by Dr. Jane Foley at an emotional school assembly in front of cheering students, proud colleagues, distinguished officials and the media. 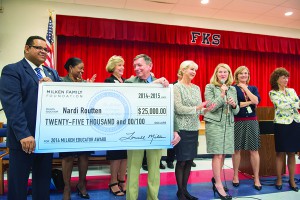 Routten was overwhelmed and moved to tears. Fellow teachers, staff and elected officials were teary eyed as well. The students showed their enthusiasm with gasps, cheers and thunderous applause. Routten remarked, “I am blessed beyond measure to have a passion and desire to work with kids. My students, they are amazing. They work hard and I push them hard, because I know they can do it.”

As Milken’s own website explains, “there’s a reason why Teacher magazine calls the award the ‘Oscars of Teaching.’ New Milken Educators have even been asked for autographs by admiring students. While the celebrity treatment is well-deserved, the Awards aren’t about the glitz and glamor. They’re about bringing attention to these classroom heroes; serving at once as validation, motivation and inspiration to current and future quality educators. The message: We recognize you. We value you. We thank you.”

“A great teacher can set a student on a path for success both now and in the future,” said First Lady Ann Scott. “I’ve met countless caring and dedicated professionals in classrooms throughout the state who have made a lasting impact on the students in their communities. Ms. Routten is a shining example of the kind of teacher every parent hopes for and every student remembers fondly.”

Routten is one of the exceptional educators being recognized nationwide by the Milken Family Foundation with an award ceremony and an unrestricted cash prize of $25,000. She is the only teacher in F 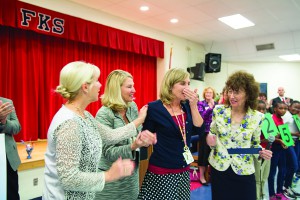 “Saint Lucie County Public Schools is so fortunate to have an exceptional number of truly outstanding and passionate educators who routinely go beyond expectations in order to ensure their students are successful learners,” said St. Lucie County School District Superintendent Genelle Zoratti Yost. “Nardi Routten certainly qualifies as one of our phenomenal educators. She represents the district well as a recipient of the highly acclaimed Milken Educator Award. Ms. Routten enjoys the respect of the educational community and works cohesively with her peers, administration and parents. Her passion for education and her conviction that all children can learn is demonstrated each day in the work she does. The Saint Lucie Public School District is delighted to offer congratulations to Ms. Routten on this acclaimed achievement. She represents a grand institution and an honorable profession.”
click for video | click for CBS news video