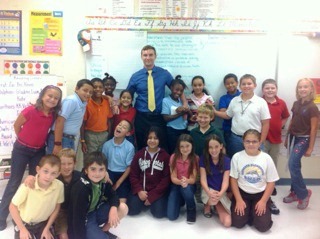 Recently retired United States Army paratrooper Kenneth Frech came to visit students in Sandy Pagliughi’s fourth grade class during a Social Studies lesson Saluting Heroes, September 11, 2012 at Floresta Elementary School. Students were shown a PowerPoint presentation that included pictures from Operations Enduring Freedom and Operation Iraqi Freedom in Afghanistan and Iraq. There was also time for a question and answer period following the presentation. One students asked Mr. Frech if he was injured during his service. He answered that unfortunately he now has to wear a hearing aid in one ear because of damage to his eardrum during his tour. Two other students shared personal reflections of their own family serving in World War II and Operation Iraqi Freedom. Ms. Pagliughi’s class thanked Mr. Frech for his service and presented him with letters for him to send to his former commanding officer who is still currently serving. Mr. Frech’s visit was part of the school’s Salute to Heroes on the 11th anniversary of the September 11th attack. Students participated in a school wide letter writing campaign to thank local heroes. The letters were distributed to local police officers and fire fighters in the City of Port St. Lucie