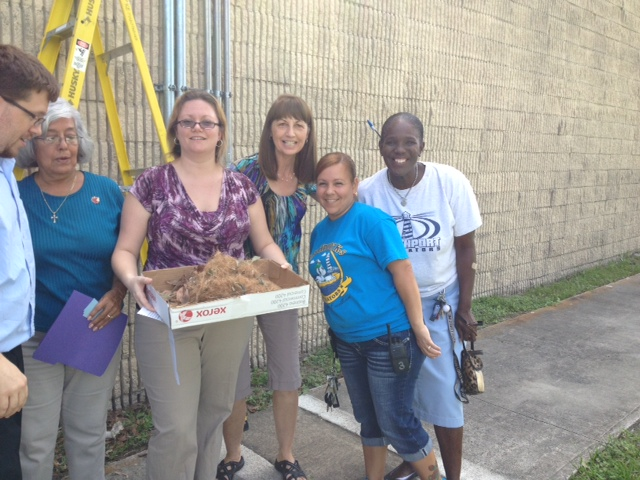 Northport K-8 School, several years ago, was designated a “Wildlife Sanctuary” after the diligent work of the school administration and several teachers. The school staff, known for its care and kindness towards local wildlife and their natural habitats, have developed a club that can be called on when wildlife emergencies occur or a rescue is needed on campus. The club, known as the “Northport Paws and Claws Kindness Club” is spearheaded by longtime Northport instructor, Mary Toto. The club including, Mrs. Toto, who has been a lifelong supporter of the care of animals, both in school and personally, Melanie Polascak, Judy Fowler, Mirta Cepeda, Kara McNair, Jim Burgoon, Marilyn Rodriguez and Barbara Wiggans have rescued a plethora of creatures including turtles, cats and kittens, birds, possums and squirrels. The club went into action recently when teacher, Melanie Polascak heard the cries of several baby squirrels who had fallen our of their nest. Teacher, James Burgoon rescued one baby hanging from the top of a wall as well as two babies on the ground. Animal Control was called immediately and the babies were then transported to All Creatures Wild Life Sanctuary to be cared for and eventually released. Northport also is the home to a wonderful and colorfully protected Butterfly Sanctuary that is cared for by instructor, Jennifer Carey and many other instructors and students. Northport K-8 School community understands that learning about kindness and actually following through, making sure that each animal is safe helps children become better, more well rounded students and better human beings. It is wonderful to witness teachers and students caring for all creatures, great and small. Special thanks to the Paws and Claws Kindness club at Northport! Pictured from left are Northport staff, Jim Burgoon, Mirta Cepeda, Melanie Polascak, Judy Fowler, Marilin Rodriguez and Barbara Wiggins.