October 7, 2014, was an awesome day for St. Lucie Public Schools as fathers/male care givers went back to school! Rather it was “Donuts with Dads,” “A Fathers’ Rally with a march around the school field” or “Game Night with Dad,” father figures pledged their support to the educational growth of students.

The march grew out of recognition of the power of male involvement in the education of all students. A father who actively participates in the educational and social developmental life of a child is invaluable and irreplaceable. Statistics from the National Fatherhood Initiative support findings that show that when fathers and men are regularly and substantially involved in the education and social development of children, those children have higher standardized test scores, higher grade point averages, higher attendance rates and higher graduation rates. Those children also have lower rates of suspension, expulsion and arrest. When you accent and improve the positive, you decrease or eliminate the negative.

While there is no magic bullet to solve the concerns we face in education today, getting fathers highly engaged is a huge step in the right direction. The march was an opportunity for all men to show their commitment to the educational lives of children. It also marks the beginning of a year-long commitment by men to children. For this reason, the march is an influential and celebrated event.

Proclamations of support were presented by the cities of Ft. Pierce, Port St. Lucie and the County Commission. In addition, Representative Larry Lee, Jr.; Congressmen Patrick Murphy; and Commissioners Kim Johnson and Chris Dzadovsky all offer their support of this movement. Further, all three law enforcement agencies supported the movement as they all understand the importance of male involvement to help produce better students, better schools and better communities.

Approximately 2,500 fathers/male caregivers participated in activities at all schools in the district. This special event in honor of dads and their support of the educational process is implemented as a MOVEMENT, not just a MOMENT! Schools will continue to have a series of father centered activities throughout the school year. 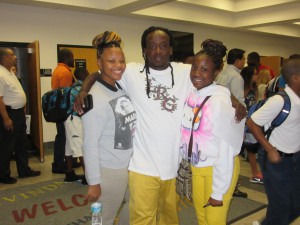