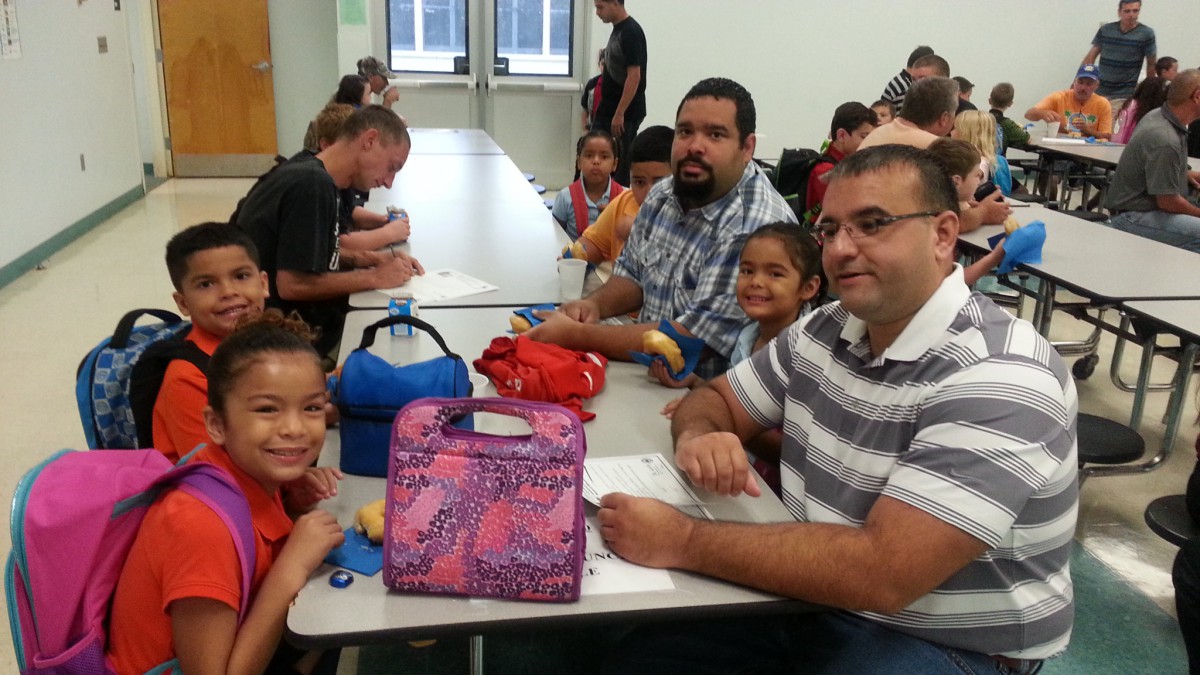 Students enjoyed bringing their fathers and important male role models to Savanna Ridge Elementary’s “Donuts with Dads” as part of the Million Father March initiative throughout the county.  Over 80 male role models came out to enjoy donuts and sign pledges.  We were ecstatic to see the pride and smiles on each child’s face as they entered school with their fathers. 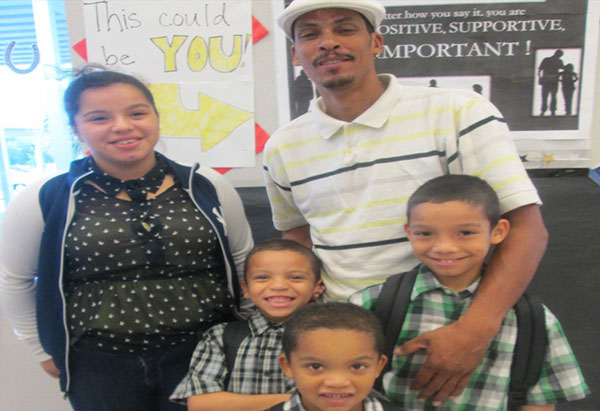 Samuel Gaines Academy K-8 celebrated fatherhood and the impact they have on their child’s education. This event was a huge success led by Robert Plowden and Duane Turner. SGA thanks Denise Sirmons Kid at Hope advocate, Avid Team, Project Success, Parent Academy, and the PTO. Kudos to our media specialist and clerk for taking pictures of our 50 participants. SGA faculty and staff prepared a wonderful breakfast for fathers. The fathers pledged to be active participants in their student’s lives. This event truly show’s that our fathers believe in Gains at Gaines. 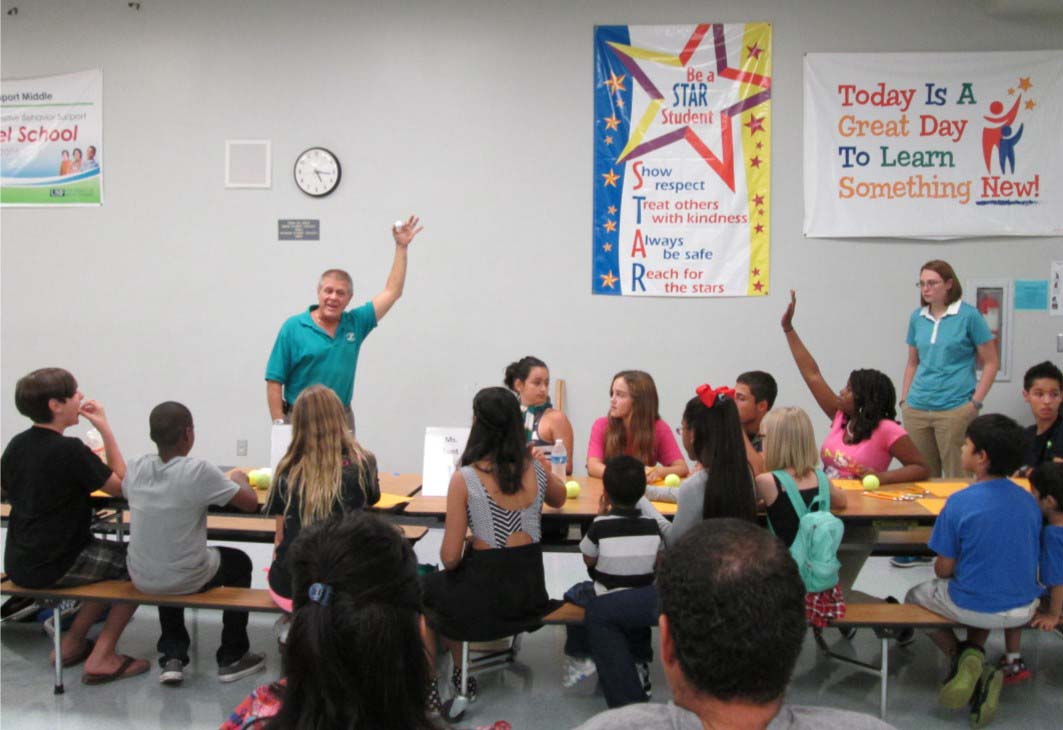 Southport Middle School students, parents and teachers had an absolutely delicious time at our first Science Night of the year!
Pupils were transformed into young scientists as they experienced the Scientific Method first hand. Southport Middle Schools’ Science Team facilitated an enriching experiment that covered a variety of concepts such as force, motion, and gravity using golf and tennis balls. The learning station activities were engaging and fun. Students left that night with an understanding of the type of thinking a scientist does and the steps involved in conducting an experiment. Everyone enjoyed the home made treats, popcorn and ice water that were provided to participants during planned breaks in the rotations. Many of the yummy treats were baked at home by Southport’s wonderful staff!!

Parkway Pirates appreciate the participation of our perfectly pleasant participants at our annual Bus Driver Appreciation Breakfast!  Drivers devote their daily drive to the our delightful students and we are indebted to them for their work. 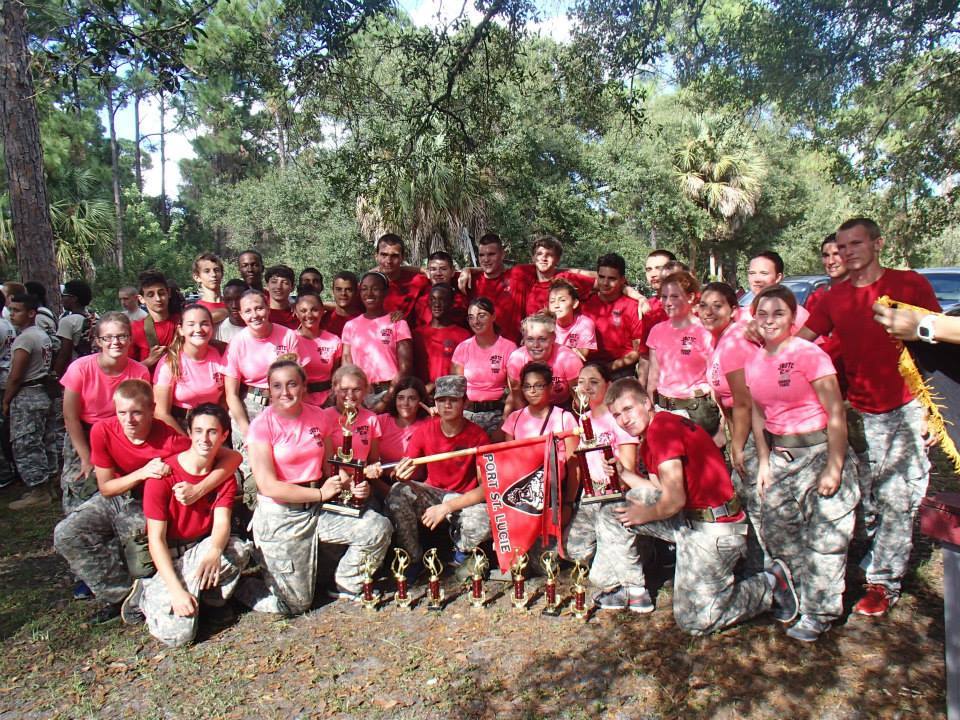 Port Saint Lucie High School’s Raider team competed in Fort Pierce Westwood’s Raider Competition against 21 teams from 10 schools. The competition had five events: 3 mile team run, Cross Country Rescue everyone takes a written first aid test and then as a team carry a 80-120 lb stretcher a mile while wearing three 30lb ruck sacks, fitness test where every team member carries two 30 lb sandbags over a 50 meters, 200 lb tire flip over a 100 meters and a Rope Bridge event. The male team and the female team won first place Over All, placing first in the Sandbags, Rope Bridge and the 3 mile run.  The mixed team placed first for sandbags. We are proud of all the cadets’ hard work. 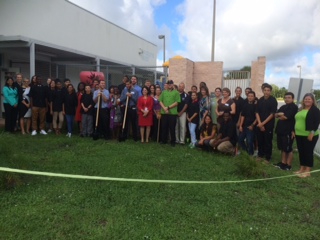 Saint Lucie West Centennial High School Culinary Arts Department teamed up with the Nutrition and Dietetics Department from Keiser University on Tuesday September 30th for the groundbreaking of a community garden. Both schools are excited about this new partnership, which will be beneficial for each institution. Centennial culinary students will gain invaluable insight regarding nutrition and food growth from the mentorship of Keiser University; Students will also benefit by having fresh, cost free lab supplies to be utilized in the Centennial kitchens. The instructor from Keiser is Dr. Lisa Griffith, and Chef Jesse Strell leads the Centennial Eagle culinary students. Administration from Centennial, including Principal Andrea Popwell, Assistant Principal Dr. Chadwick Bacon, and CTE Director for Saint Lucie County Schools, Kathy Schmidt, are all strong supporters for this collaboration between local educational institutions. Initial donations for the garden were provided by Home Depot and Lowes in Saint Lucie West, as well as Target Stores. Additional monetary donations or garden supplies may be contributed for continued growth of the community garden by contacting Chef Jesse Strell at 772-344-4411 or by email at Jesse.Strell@stlucieschools.org. 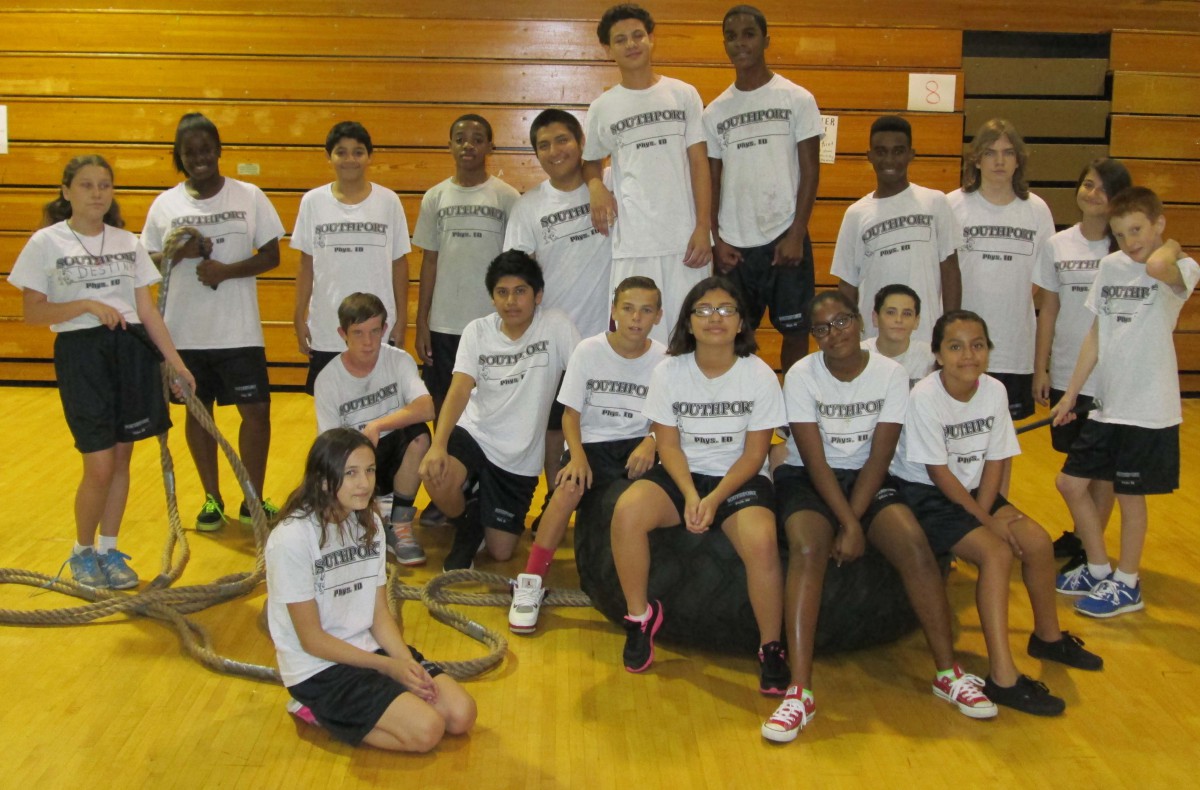 Overall this program helps students to achieve a higher level of fitness in a unique non-competitive or competitive environment. It has been proven very successful as Southport Middle School! 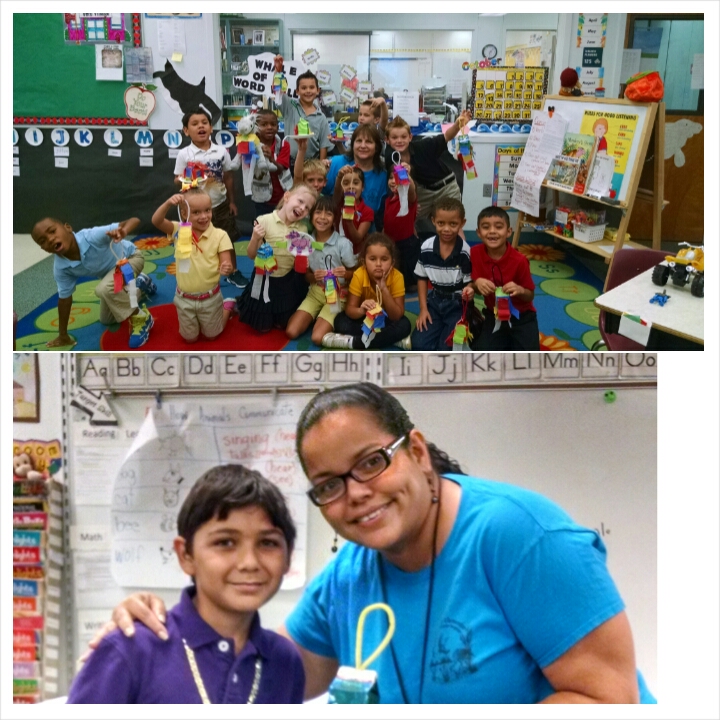 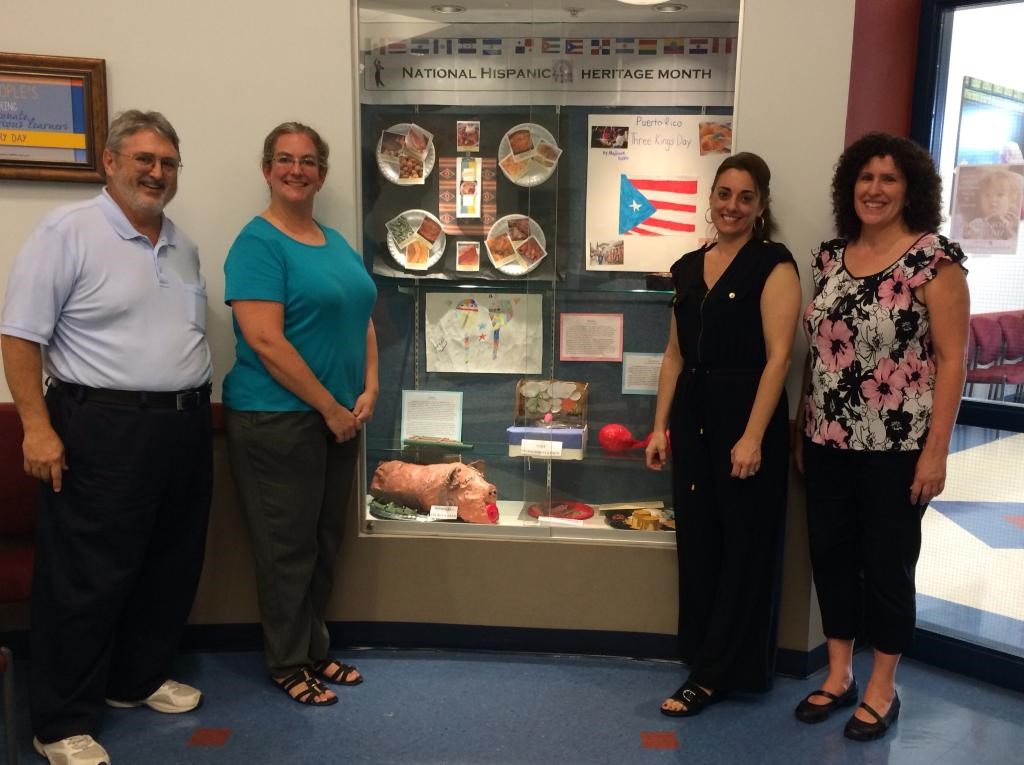 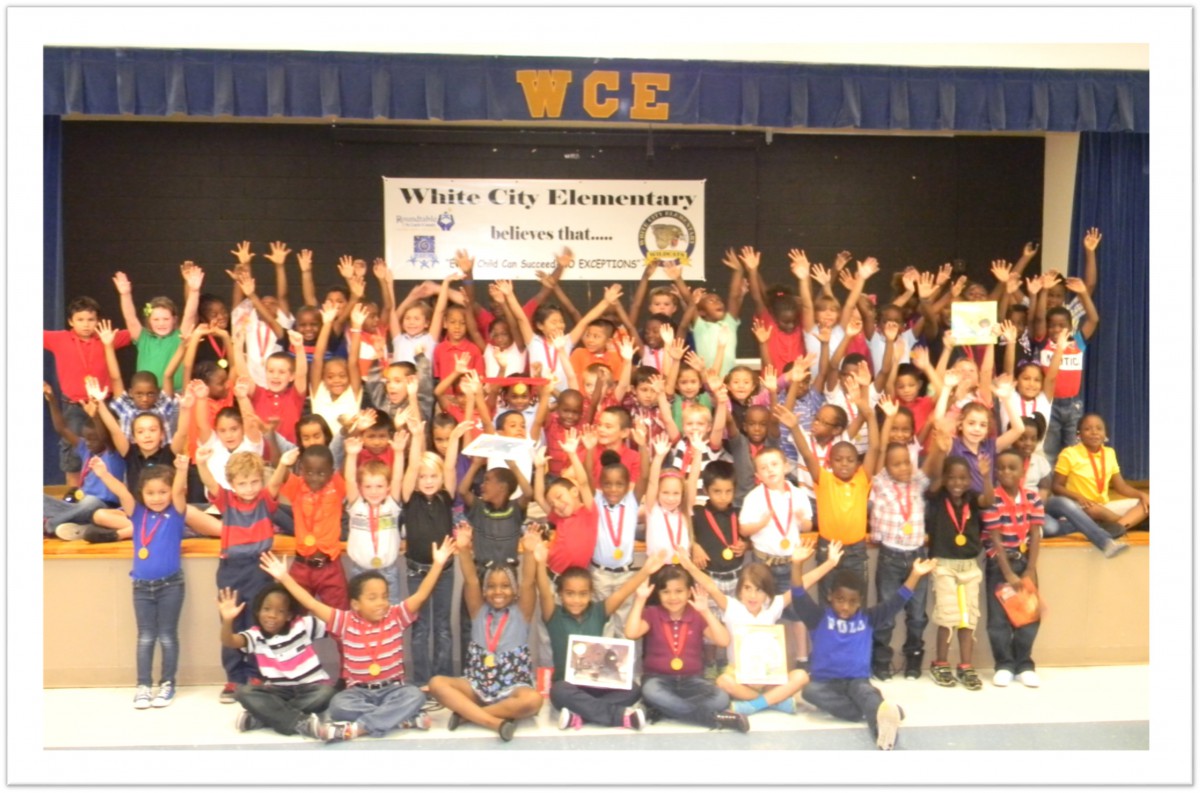 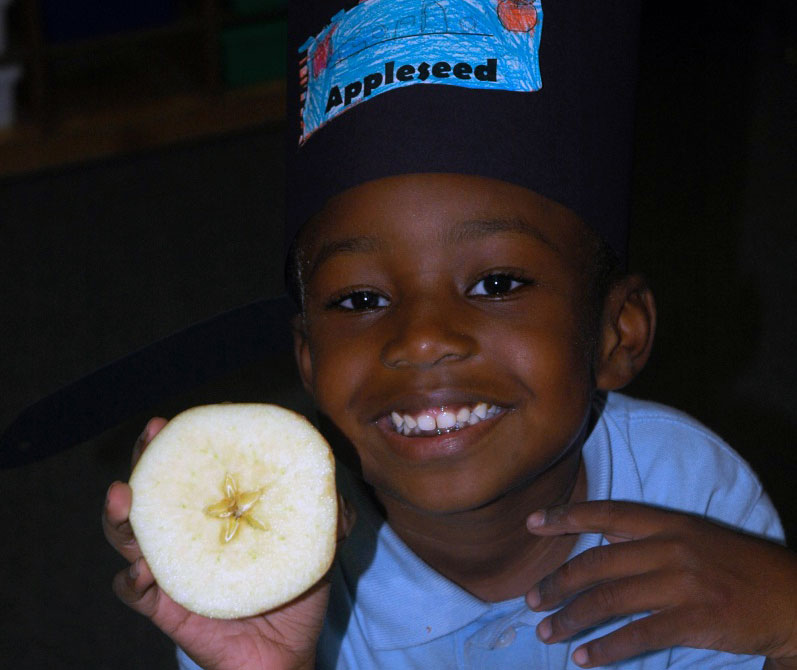 September in kindergarten has been such a busy month!  Did you know what you will find if you cut open an apple? Isaiah Brickles-Jackson was pleasantly surprised to find a star!  Students in Melanie Francisco’s class studied apples while learning the properties of matter.  After reading about Johnny Appleseed, students turned apples into applesauce.  They practiced patience while they worked in their classroom all day smelling the delicious aroma.  At the end of the day, they were able to taste it.  The applesauce was fabulous! 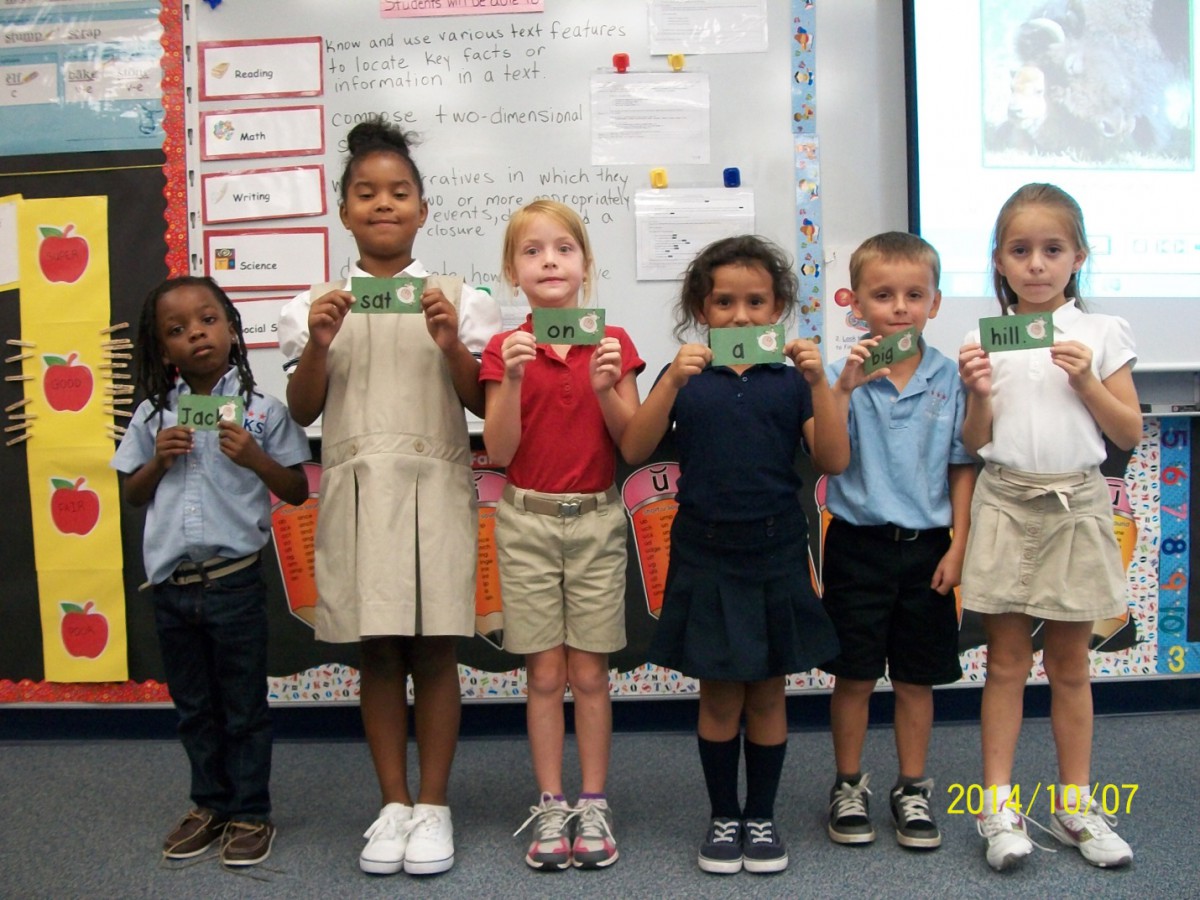 Mrs. Alice Parks’ first grade students had fun working in a Kagan Line Up activity.  The students unscrambled sentences and once the team came to a consensus they wrote their sentences in their word work journals.
Teammate, left to right, Teequavious Mills, Chyanne Creel, Naomi Lane, Melaydee Munoz, Lennon Paquette, and Madison Licausi 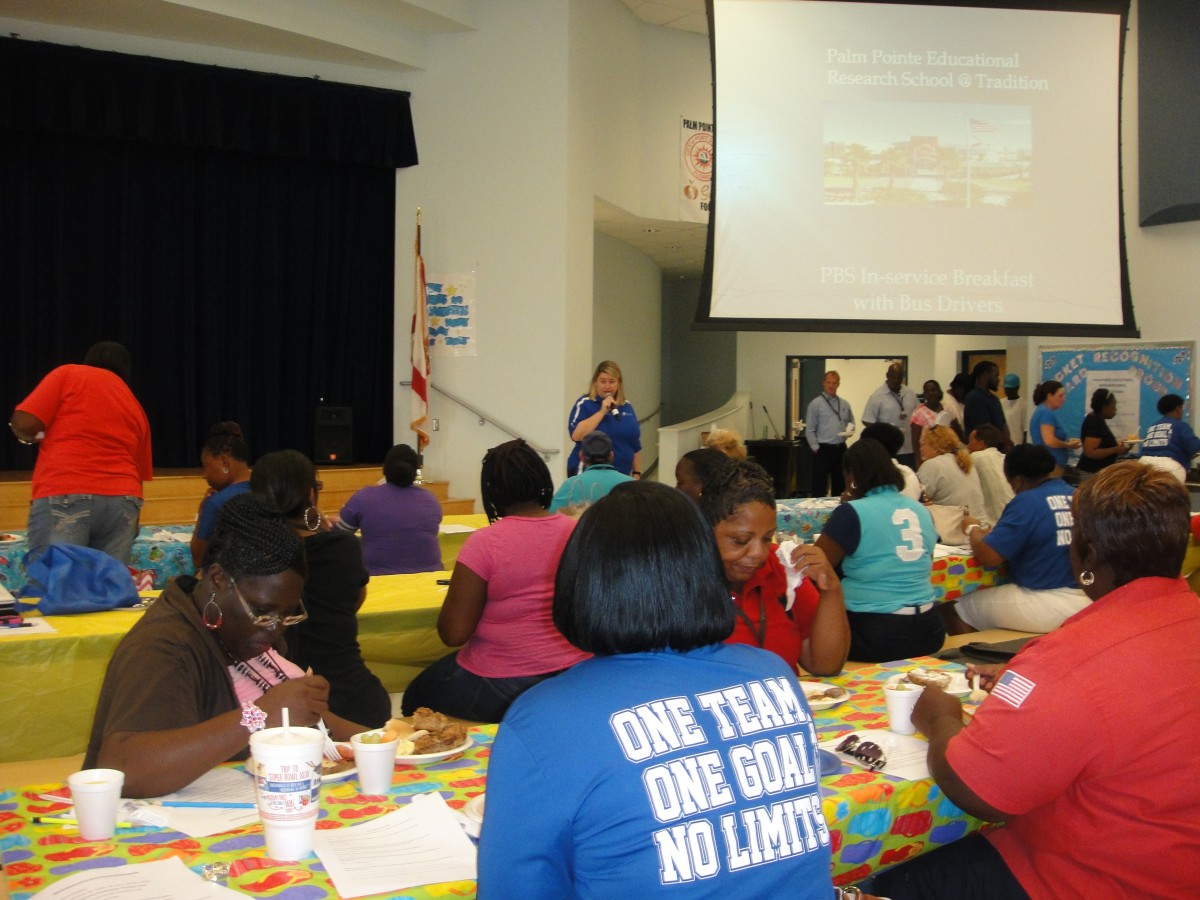 Palm Pointe Educational Research School @ Tradition recently celebrated our P.P.E. bus drivers during our 4th Annual Bus Driver Breakfast prepared by one of our volunteers, Ms. Pam Molner. The bus drivers were treated to a delicious breakfast and a short Positvie Behavior Intervention Support (P.B.I.S.) presentation given by Dean Debborah Estrada and Dean Matthew Kovach. Diana Hight,(P.B.I.S. parent volunteer) collected gifts from area businesses that were used as raffle gifts for drivers to win. Pictured is Assistant Principal, Mrs. Kathleen Perez as she welcomes the bus driver’s to the breakfast. Thanks to the many parent volunteers that helped to make this celebration a success! 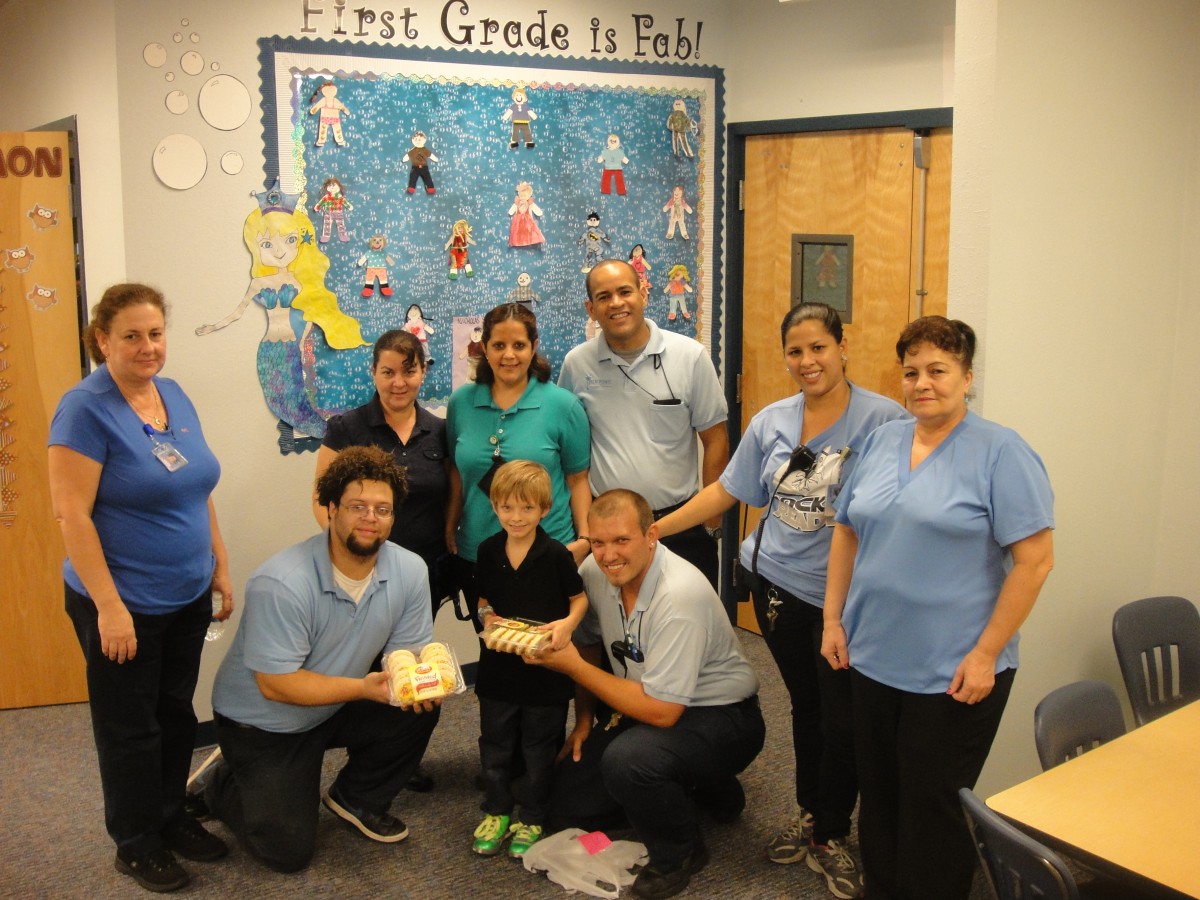 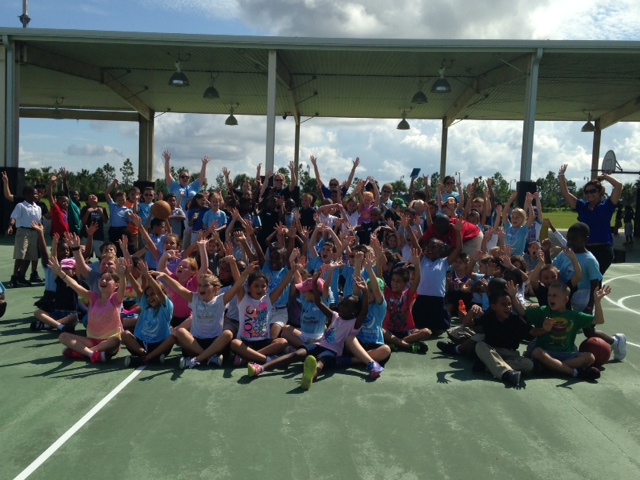 Palm Pointe Educational Research School @ Tradition recently held a school wide “Fun Run” for Positive Behavior Interventions and Support (P.B.I.S.) as a fundraiser. Each grade level had a special day where they went outside for activities such as walking, dancing, team sports, hula hooping, jump roping, etc. Students were able to bring their own I-pods to listen to as they were getting exercise at the different stations set up for them. At the end of the event students were given drinks and healthy snacks. The money raised will go back to the classrooms to purchase positive rewards for the students. The event was a huge success and the students had a blast! Pictured is all the students in third grade that participated along with their teachers at the end of the event. 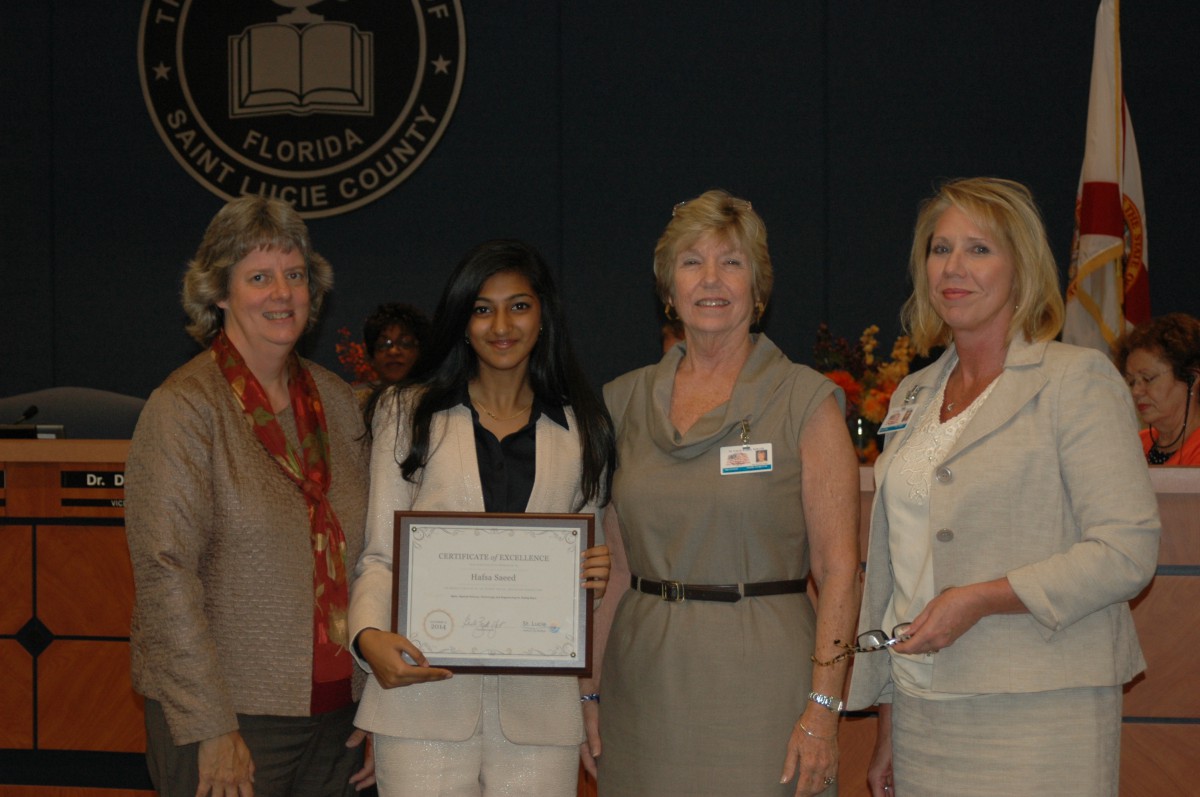 At the October 14th School Board Meeting, Hafsa Saeed, a student from Lincoln Park Academy, was recognized as being a 2014 finalist in the Broadcom MASTERS (Math, Applied Science, Technology and Engineering for Rising Stars) competition. She will represent LPA and SLPS at Washington DC where she will get an opportunity to meet President Obama. Pictured are, Board Chair Debbie Hawley, Hafsa Saeed, Superintendent Genelle Yost, and Assistant Superintendent Kerry Padrick. 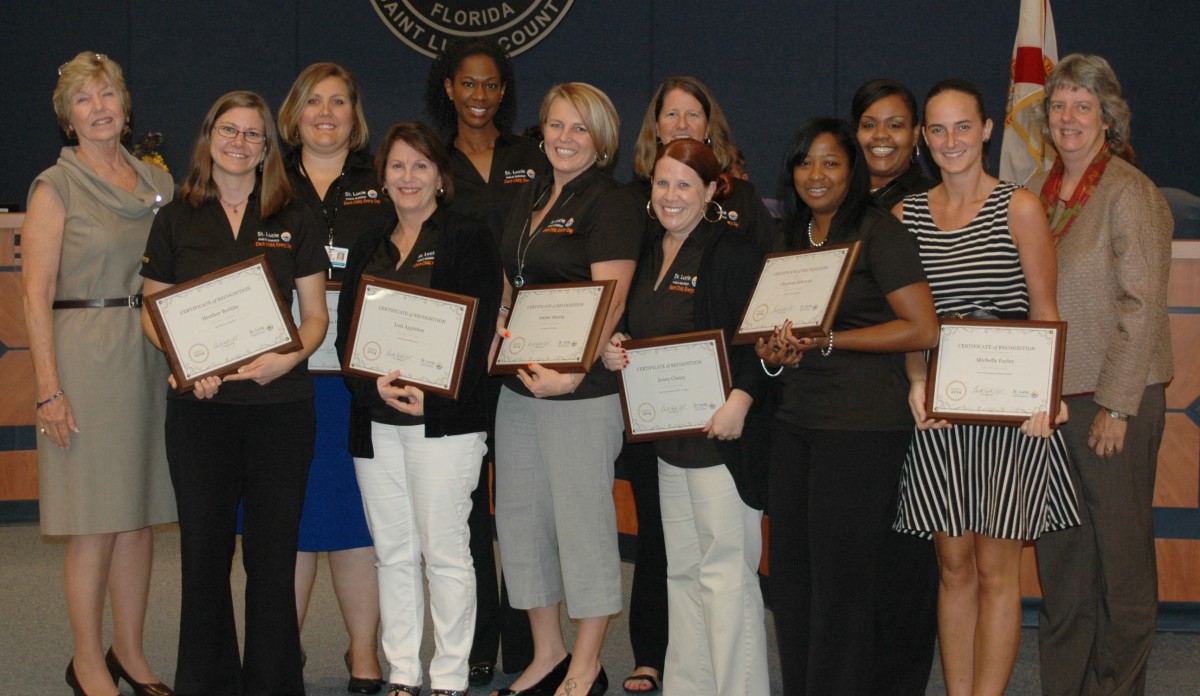 St. Lucie Public Schools recently hosted a unique and powerful event in the lives of our educators, ECET2 (Elevating and Celebrating Effective Teaching and Teachers). The event supported the four core messages of SLPS: academic achievement and excellence; high quality instruction; safe and caring schools; and recruitment and retention of high quality staff. This was an event planned by teachers for teachers to support and share their passion for education. The convening provided opportunities for great teachers to “tell their story” and provided opportunities for teachers to learn with each other, network, and collaborate.  The event was funded by grants from the Bill and Melinda Gates Foundation as well as the St. Lucie Education Foundation. 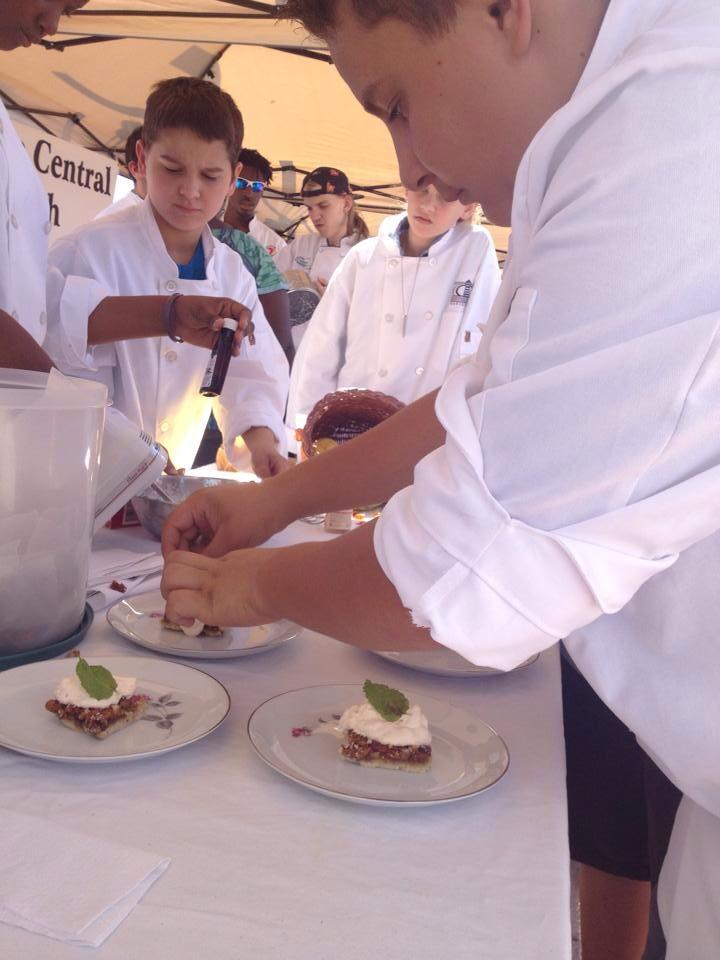 Northport K-8 School Culinary Arts students in Rachel Ellsworth’s class competed in the desserts category for the Future Chef competition at the Fort Pierce Farmer’s Market recently. The event was organized by Slow Foods of Ft. Pierce. Students were thrilled to learn that their entry, pecan bars with fresh whipped pumpkin topping won first place in the desserts category. Students chose the recipe and some of the ingredients were purchased from local vendors at the Farmer’s Market. The pecans were purchased from Yun’s Produce and the vanilla was purchased from Lola Tortola Sugar and Spice. Four judges analyzed the bars for taste, display and creativity. Also competing were Fort Pierce Central High School, Treasure Coast High School, Port Saint Lucie High School and Forest Grove Middle School. Northport K-8 School culinary arts students and Mrs. Ellsworth were especially thrilled because their chef’s jackets were completed and delivered the day before the competitive event. The Northport Culinary Arts program provides students with an area of expertise that many times goes uncultivated. The program is “just right” for students who love to cook and invent a real Pièce de résistance! Pictured is Northport 8th grade student and chef, Zachary Shelton with other members of his team. 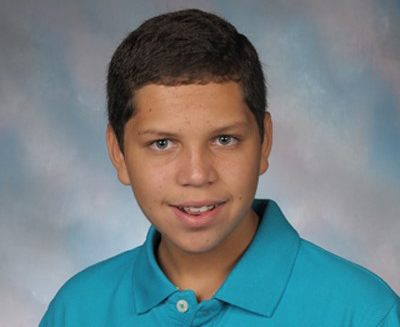 Local Teen is Chosen for Florida Youth Advocacy Board for SWAT

Congratulations to Nicolas Suarez, a tenth grade student at Lincoln Park Academy, who was chosen to serve on the Florida Youth Advocacy Board of the Students Working Against Tobacco (SWAT), a statewide youth-led movement.

The Youth Advisory Board works in collaboration with the Florida Department of Health’s Bureau of Tobacco Free Florida to help plan the direction and goals of the SWAT organization and of the youth prevention component of the state’s tobacco control campaign. Students work with county grantees on a local level to support initiatives that educate others about tobacco use, help protect youth from tobacco, and strengthen local policies, especially those that protect the public from secondhand smoke.

“Youth advocates are the next generation of leaders in Florida and across the country,” said State Surgeon General and Secretary of Health Dr. John Armstrong.  “These enthusiastic students work diligently with a passion to create positive change and raise awareness among their peers and community about the dangers of tobacco use.”

SWAT aims to empower, educate and equip Florida youth to revolt against Big Tobacco. SWAT is a movement of empowered youth working together to de-glamorize tobacco use. Their efforts aim to shape tobacco-free norms, make tobacco less desirable, less acceptable and less accessible.

“We are proud of Nicolas and his contribution to our community,” stated Superintendent Genelle Yost. “Efforts to eliminate the use of tobacco creates a healthier tomorrow for all of us.” 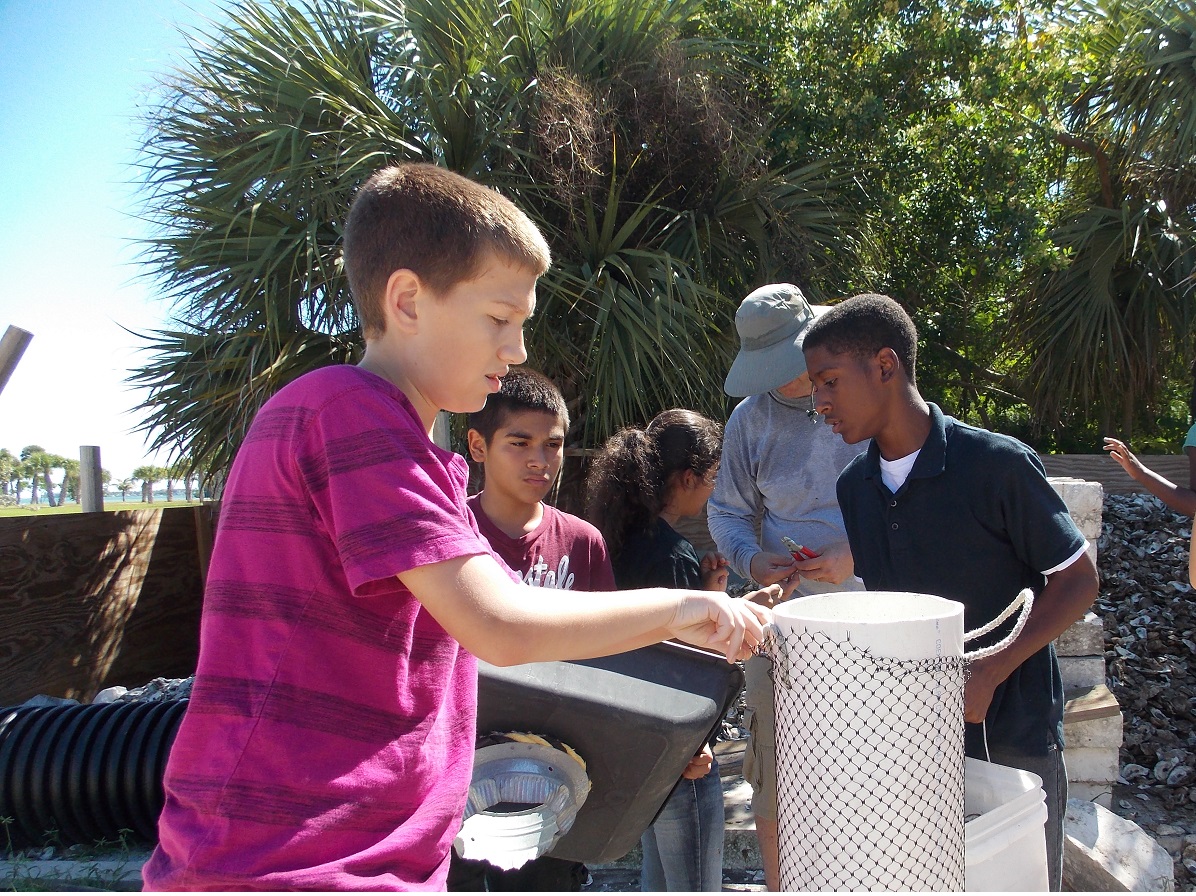 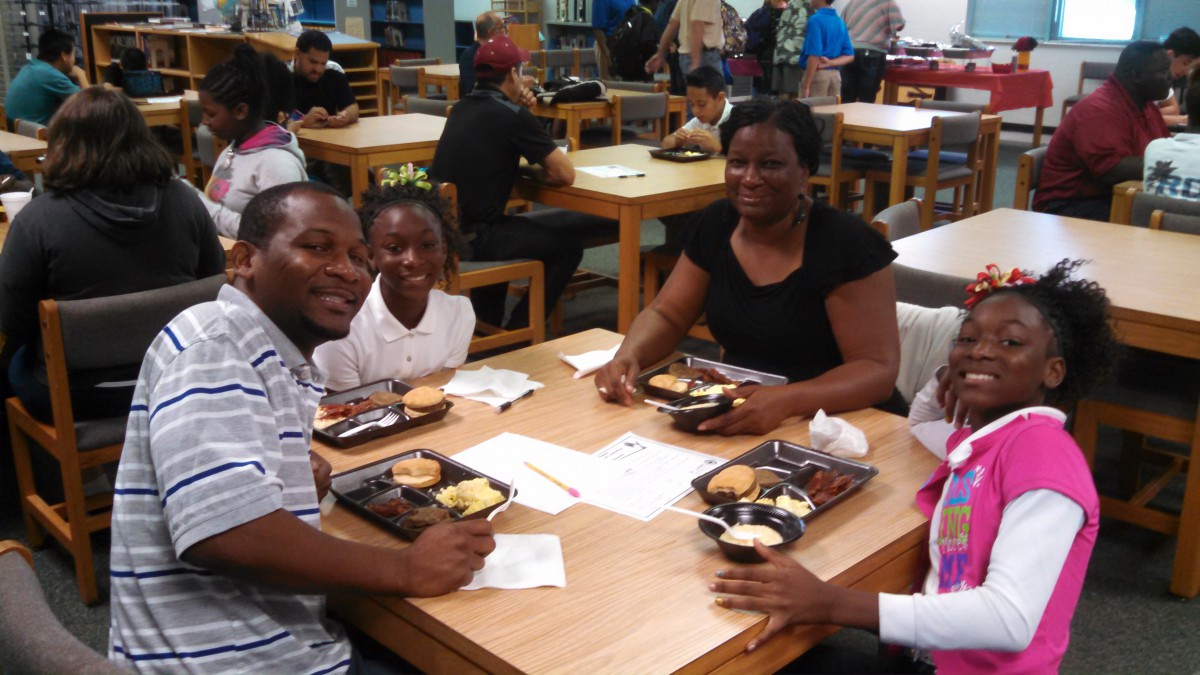 Thank you to all the fathers, uncles, grandfathers and family members that came out to support our students at Forest Grove Middle School.