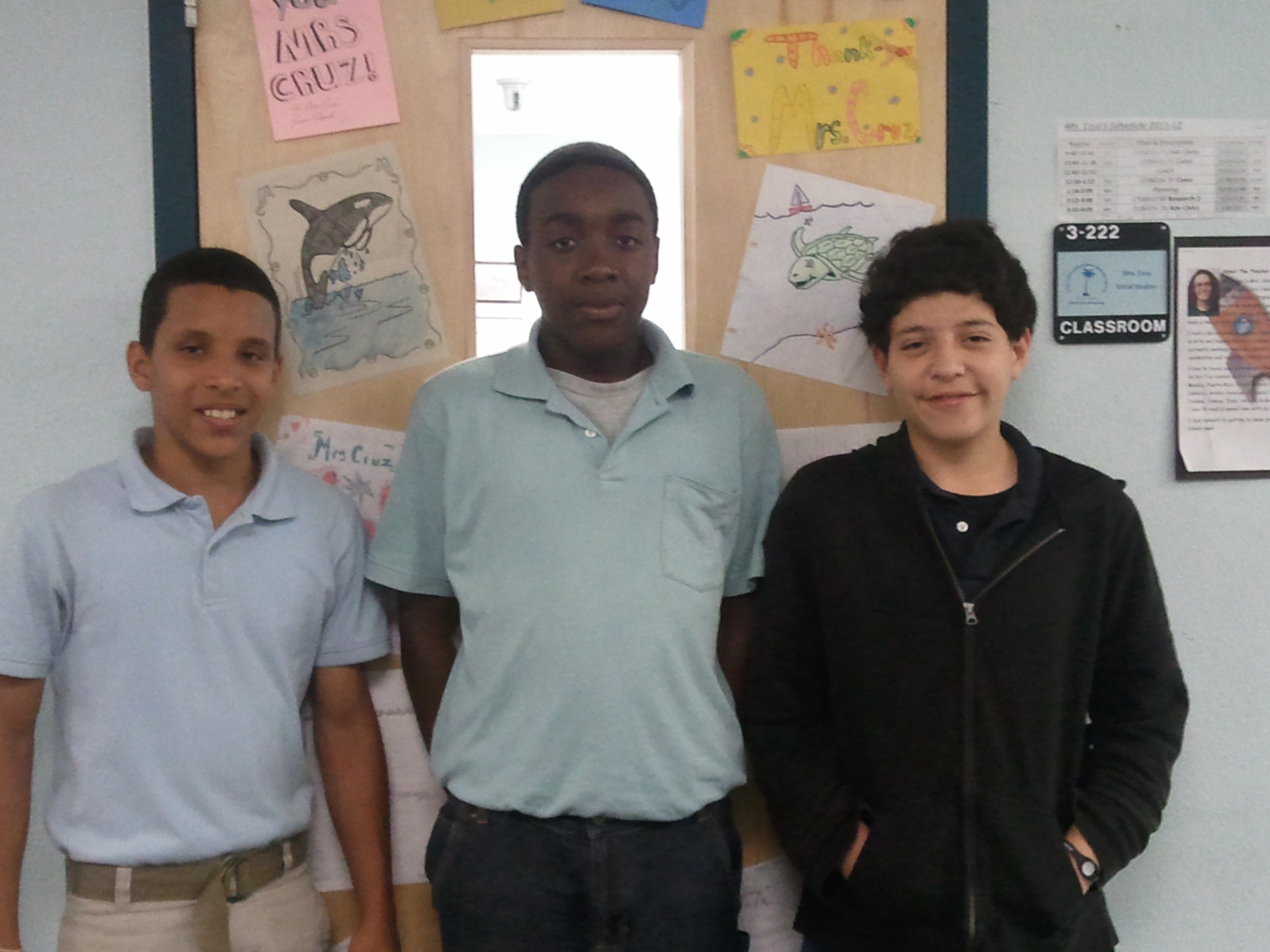 A team of students from Hillary Cruz’s seventh grade civics class at Palm Pointe Educational Research School in Tradition recently won first place for the regional division of the Florida Stock Market Challenge.  This is a web-based educational tool used by thousands of students around the state each semester to help teach economics, finance, current events, math, social studies and technology. The winners will receive a $100 check for the school, a $50 gift certificate for Papa John’s Pizza, and first place certificates. Pictured, from left, are team members Angelo Arvelo, Lewis Coriolan, and Edwin Bustamante. 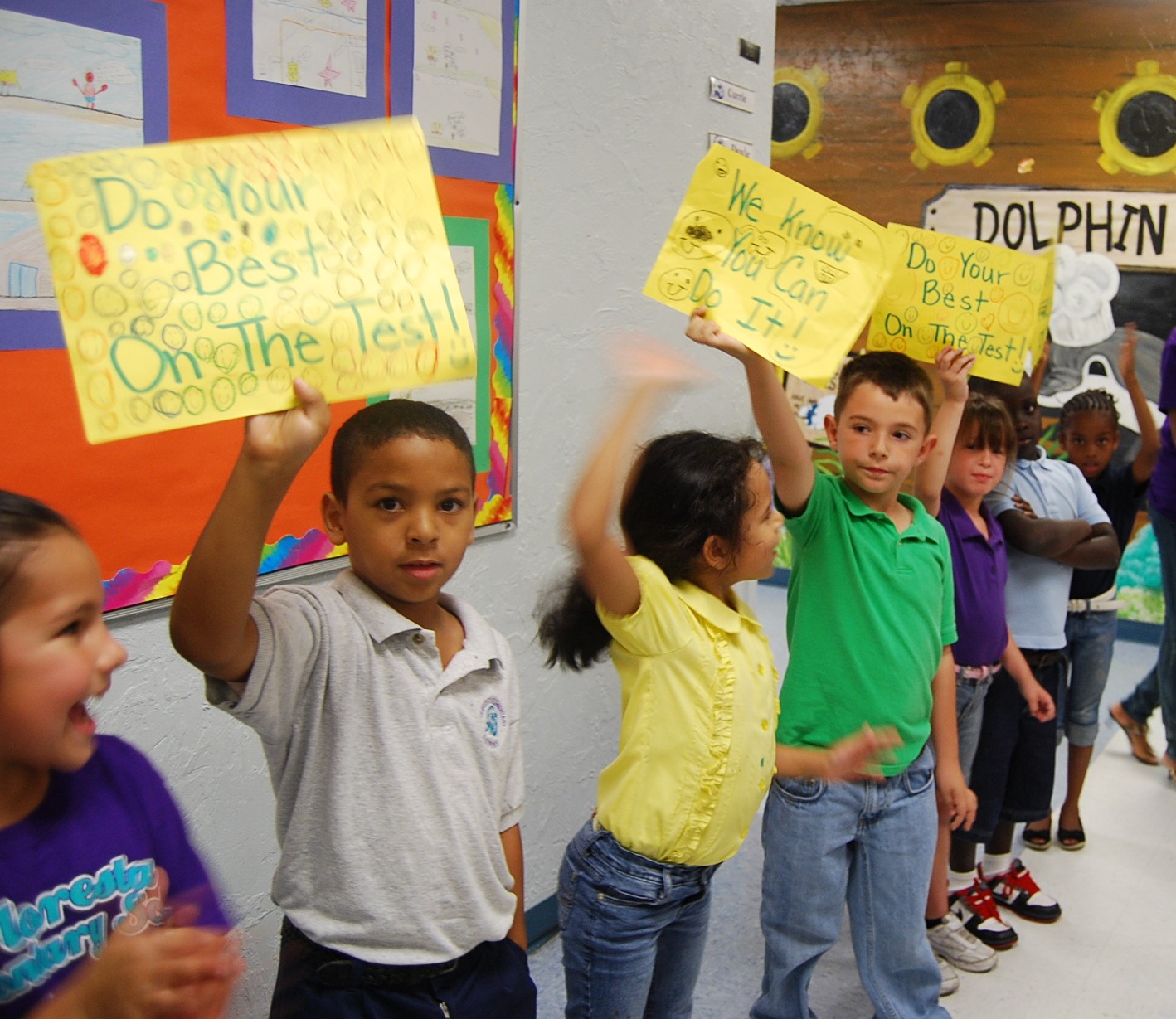 Kindergarten through fifth grade students at Floresta Elementary School supported one another with a school-wide “Tunnel of Encouragement” Rally the Friday before FCAT testing began. Kindergarten through second grade students and teachers lined the hallways armed with posters and pompoms, chanting heartfelt words of encouragement as third through fifth grade students made their way to the cafeteria for some motivational activities and words of wisdom. Each third through fifth grade student was provided a t-shirt with the slogan “Floresta Dolphins Destroy the FCAT” across the front. Thank you to Mary McCartney, Gerri Wills, Elish Mancuso, Ken York, Kathy Capas, Sharon Price, Melvonia Wheeler, Norma Greene, Miriam Negron, and Lynette Marraffa, all students and teachers for making this such a special event. 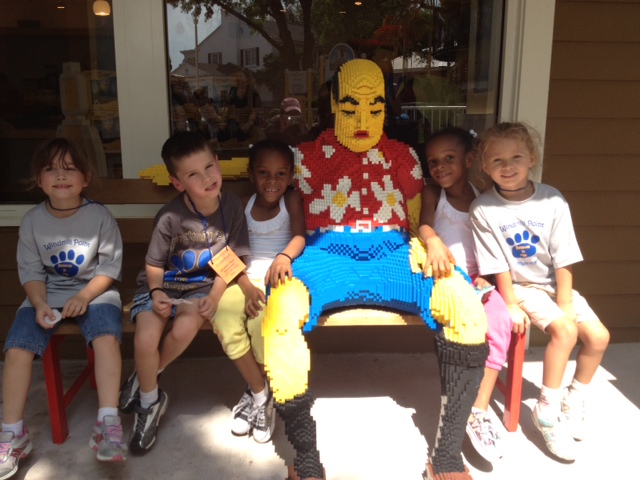 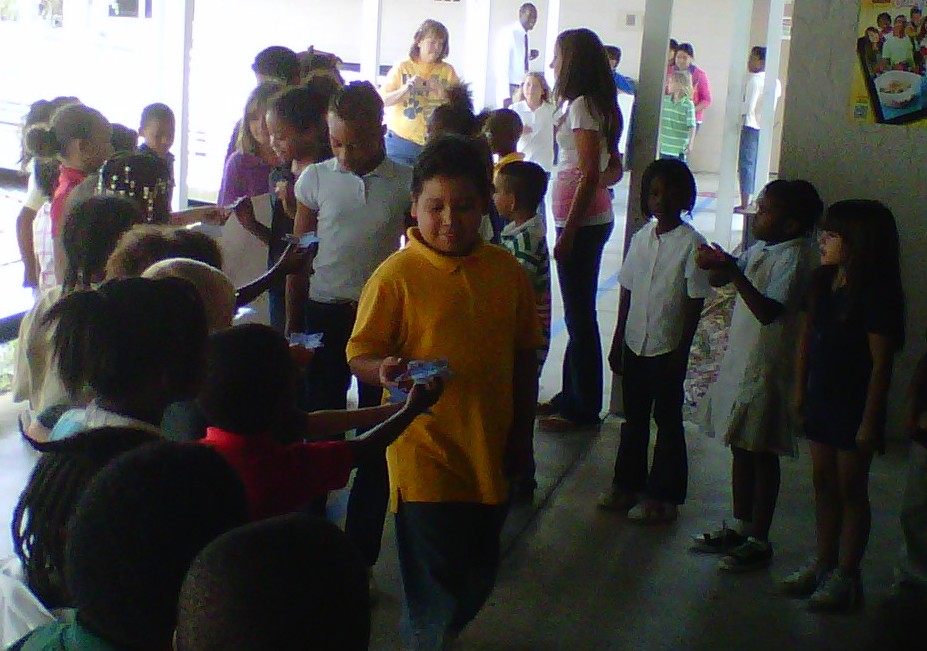 Everyone cheers at White City Elementary for FCAT

White City Elementary kindergarteners created a “Tunnel of Stars” as they handed out Starbursts to cheer on the third graders as they entered the FCAT Pep Rally. 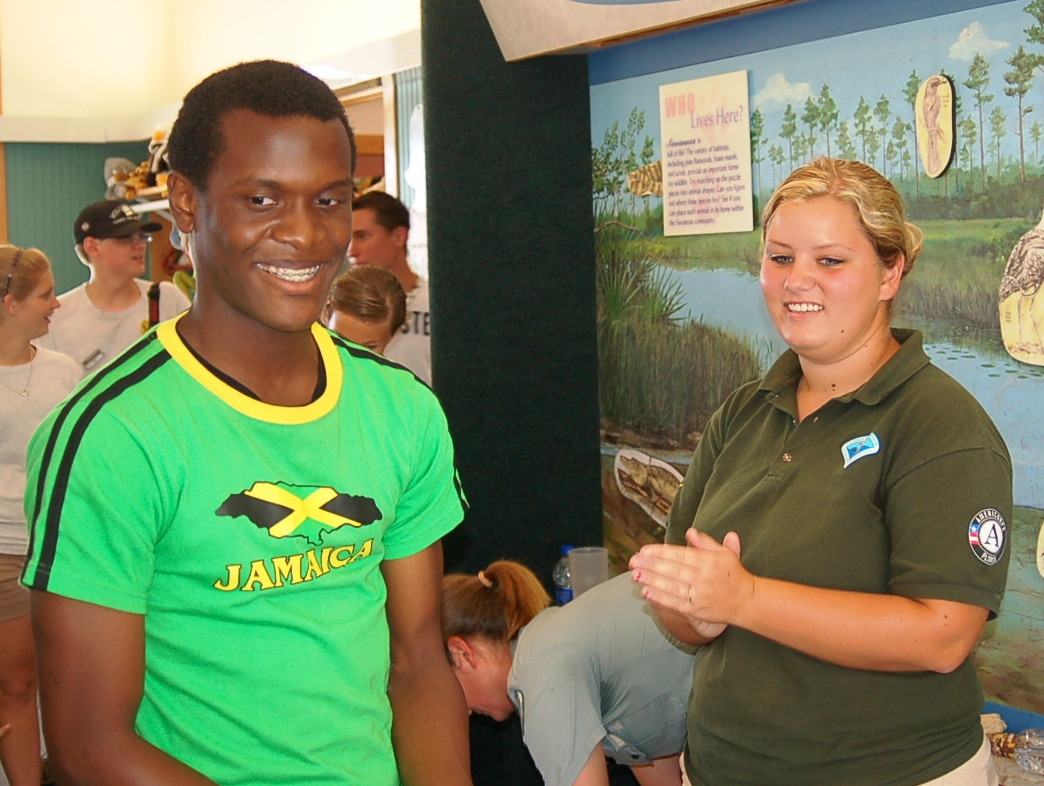 A student led organization out of the Savannas State Park Preserve on Walton Road organized an event to encourage teens out of the house on a Saturday afternoon and enjoy the park. Students from the tri-county area attended and activities included a scavenger hunt, nature hike, minute to win it games, and live musical acts from Lincoln Park Academy’s Jazz ensemble, Port Saint Lucie High School duo Nick Vinson and Skyler Jacobson, and alternative rock band also from PSLHS, The Waking Theory.  Thanks to generous donations from the Walmart Distribution Center, give-a-ways included a 37inch flat screen TV and a combo grill as well as several outdoor/survival supplies. Pictured is Michael Weir from Northport K8 School who went home with a brand new TV! 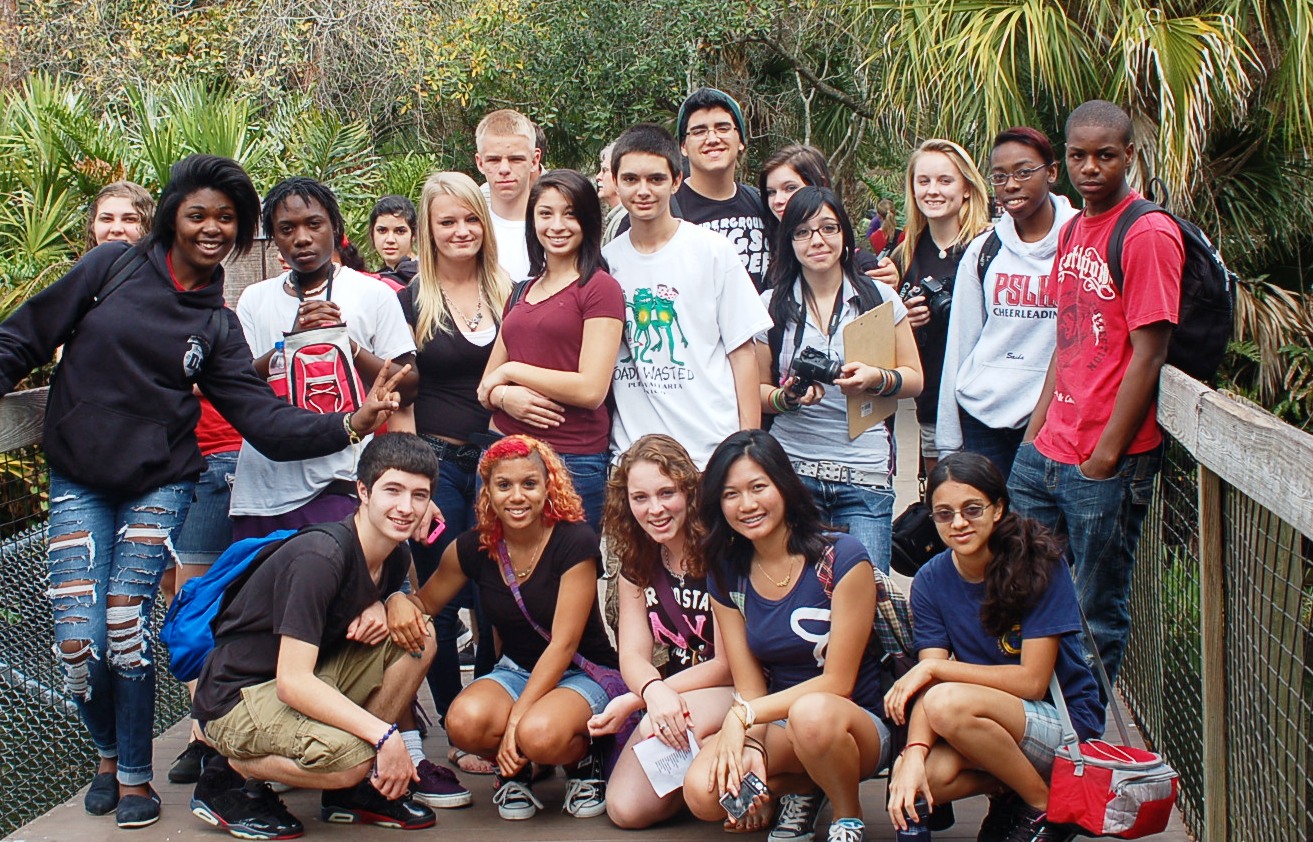 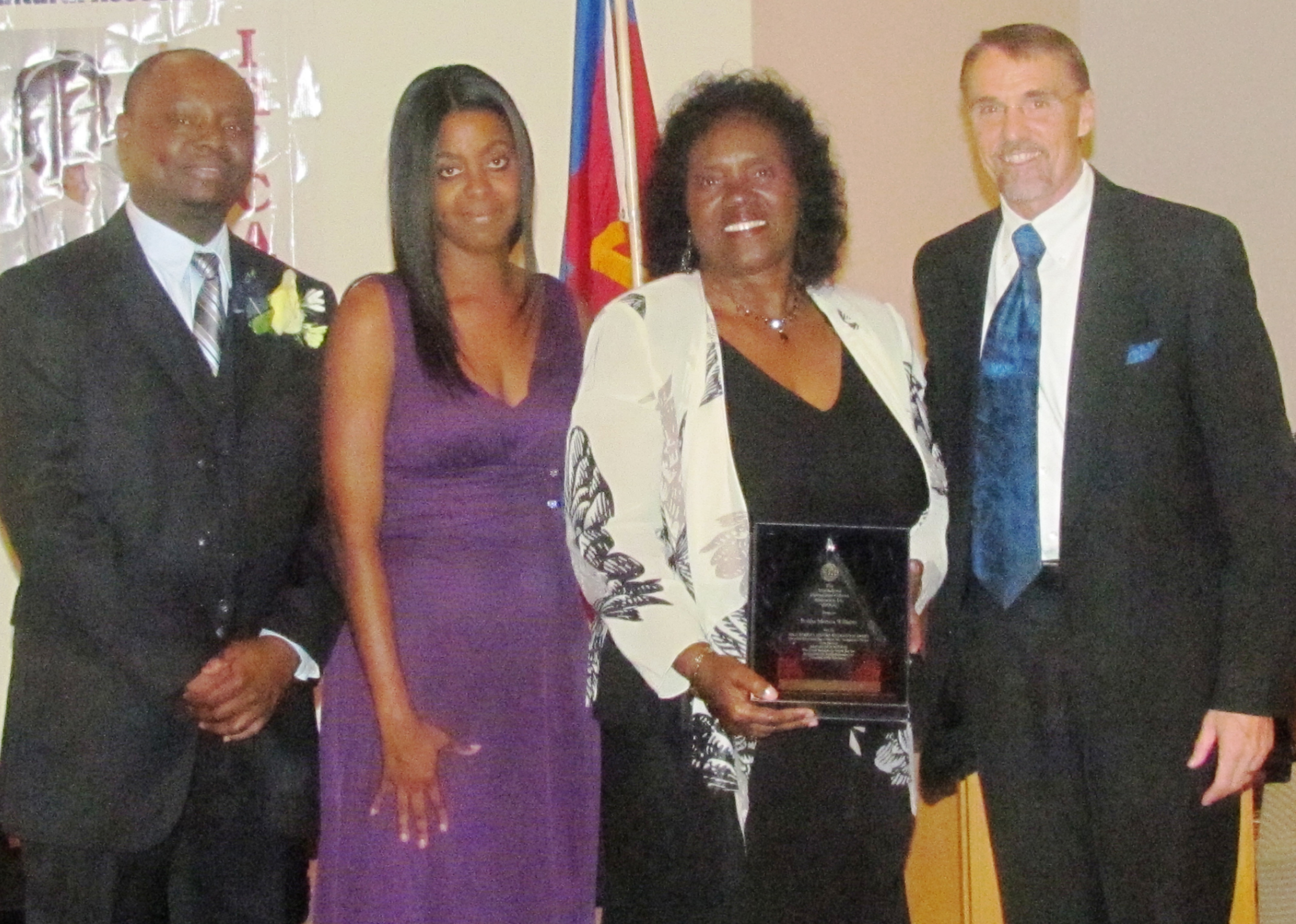 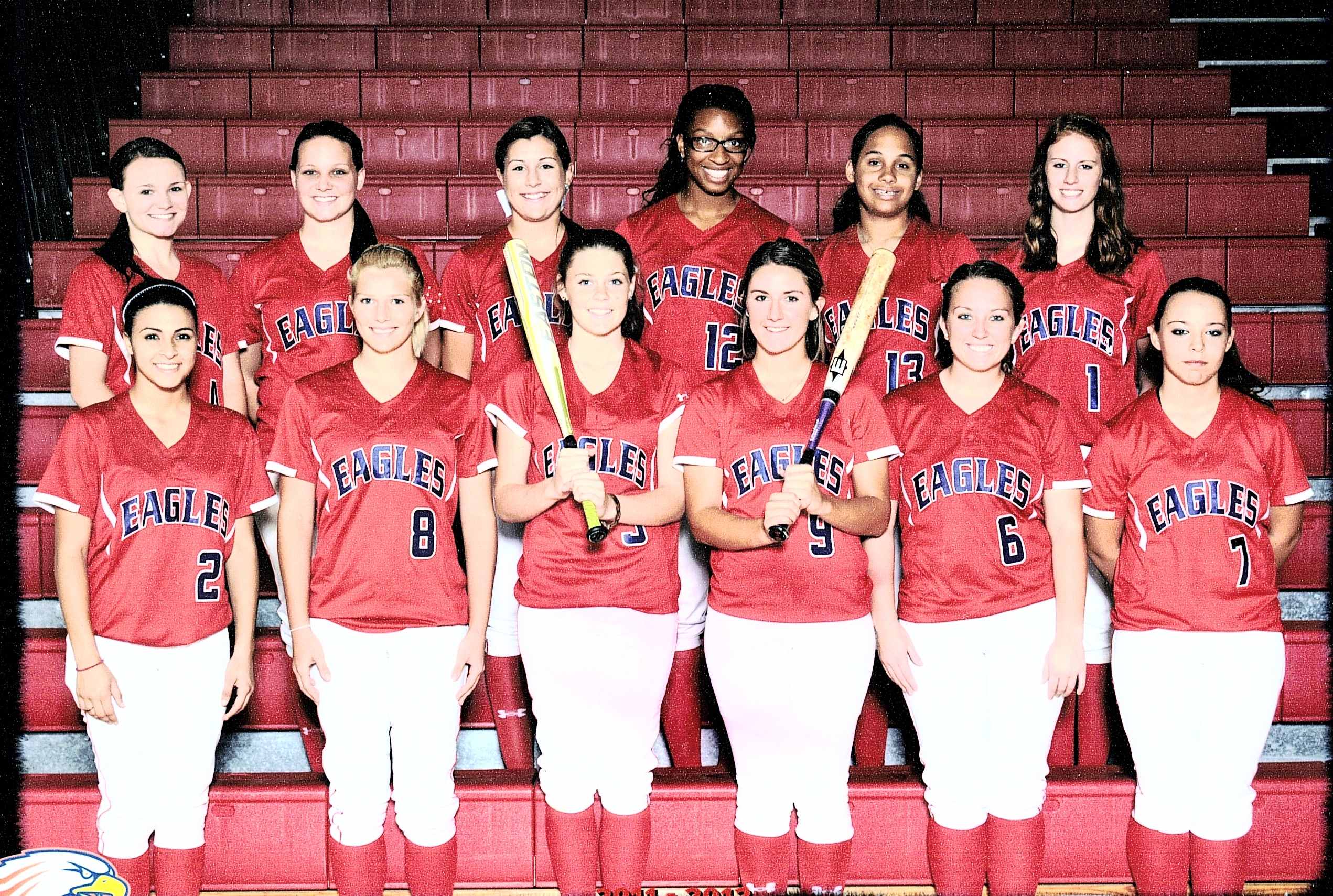 The girls softball team at St. Lucie West Centennial High School has again been chosen as a finalist in the Allen Sportswear “Dress the Champion” contest.  Votes are cast by logging in to the attached link below and voting for the school up to once daily. The winner receives home and away uniforms and coaching attire. Pictured, top row, are Allison Moncada, Kelly Bateman, genny Tuning, Lydia West, Janira Guzman and Megan McHenry. Bottom row, from left, are Amber Camacho, Lauren Ashe, Halli Gorsuch, Nicole McHenry, Kaitlyn Yust and Nicole Davis. Not pictured is Meredith Flynn. Coaches are Cheryl East, Tim Caffey, Roxanne Bourrboneire, Blair East and Tom Share. 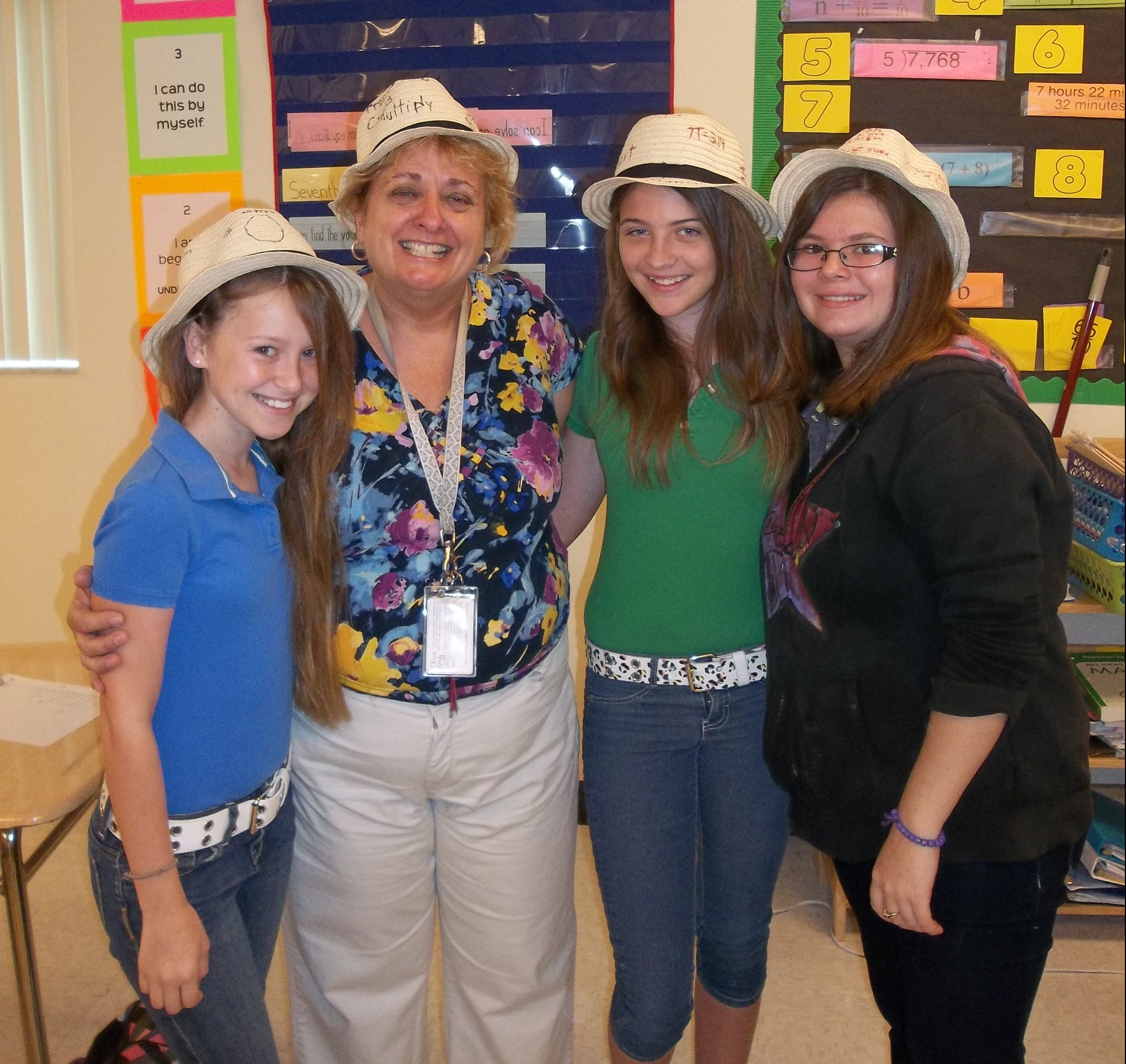 Allapattah students jump at the chance to dunk their teachers

The third grade student team at Allapattah Flats K-8 School was excited to host the dunk tank at this year’s Gator Fest. Students from all grade levels, and some parents, lined up to dunk their favorite staff member. Pictured is Jacob Barbour trying to dunk third grade teacher Lauren Monroe.

The students of Mariposa have worked very hard this year to raise money for the American Heart Association in their quest to prevent heart disease.  As a motivation to the students, Principal Craig Logue promised to spend the day on the school’s roof if the school met or exceeded the target for the year.  True to his word, Mr. Logue spent time on the roof greeting students on April 13th. Thanks go to all who donated to the American Heart Association, for Barbara Monaghan and Adriana Roberts for coordinating the event and for Mr. Logue for spending time up on the roof.

Northport K-8 third graders in Linda Beidler, John Fallon, Janine Wiecks, Diana Lankow, Melanie Polascak, Glenda Taylor and Tiffany Tredor’s classes took the stress out of their first FCAT test by taking whacks at a homeade pinata on Friday in the school’s courtyard.  As each student took a whack and showed who was boss, they were urged to shout out a learned test taking strategy.  Stategies called out were read the entire passage before attempting to answer, consider key words, underline the key words, cross out distractors, read the questions first, answer from the last question to the first, substitute words for vocabulary questions and the biggest strategy was “think before you answer!”  Students have worked on basic test taking strategies all year but were given an intense course in strategies by literacy coach, Deb
Mock using a program called Get Smart.  Pictured is third grader Christopher Cabrera from Janine Weicks class taking a swing at the pinata. 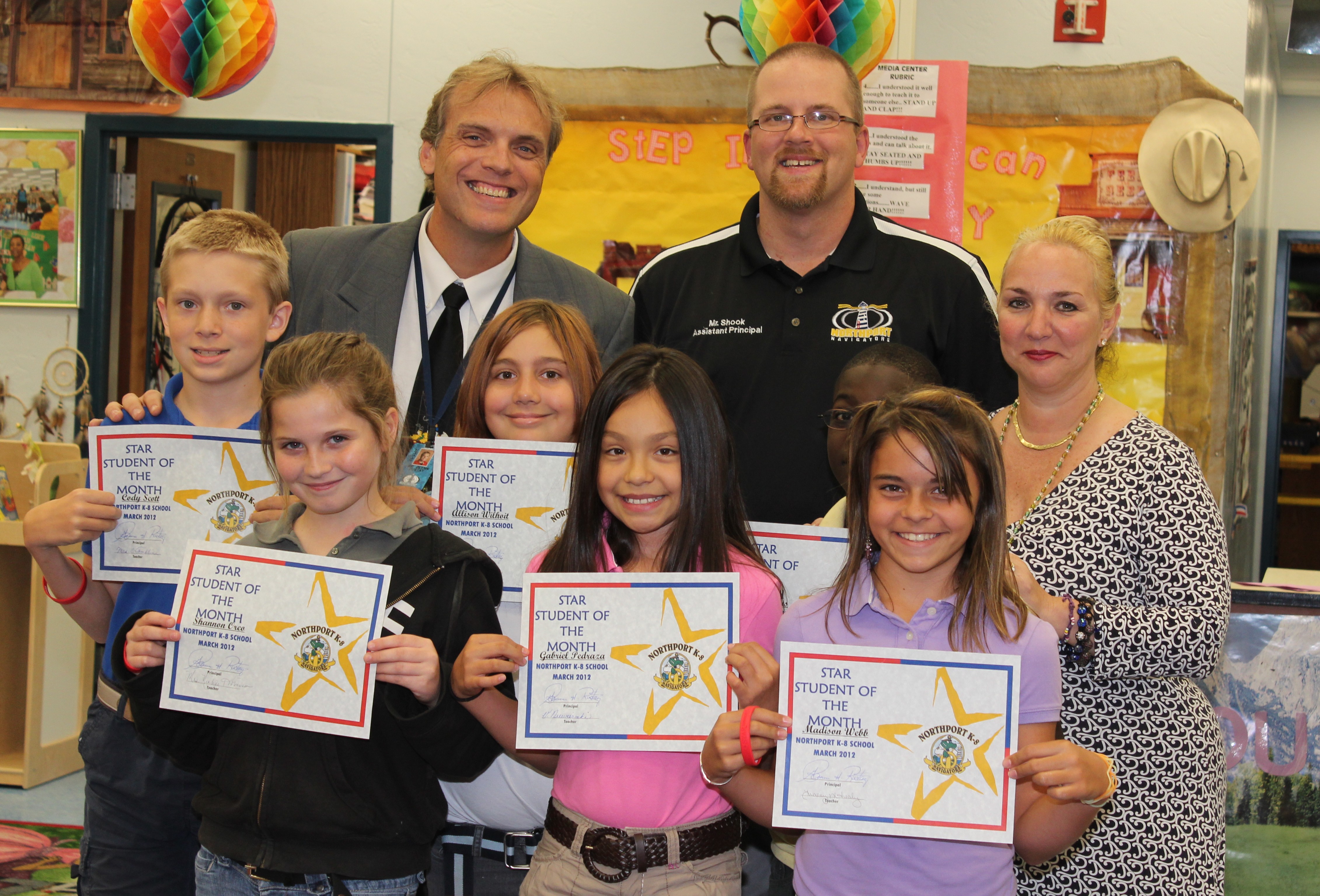 Northport K-8 School honored well over 100 students recently during the Student of the Month celebrations in the school’s Media Center.  Students K-8 were selected by their teachers for academic excellence, overall great attitudes and improvement in conduct or grades.  Students were congratulated by the principal and assistant principals, and had rounds of applause from parents and grandparents.  Pictured in front are students from fifth grade, from left, Cody Scott from Charlotte Tombline’s class, Shannon Oreo from Nichole Robinson’s class, Gabriella Pedraza from Valerie Niewieroski’s class, Jason Derilus from Carl Caldwell’s class, Allison Wilhoit from Judy Fowler’s class and Madison Webb from Tracey Healy’s class.  Top row, from left, are principal Glenn Rustay and assistant principals Doug Shook and Bennie
Montenegro. 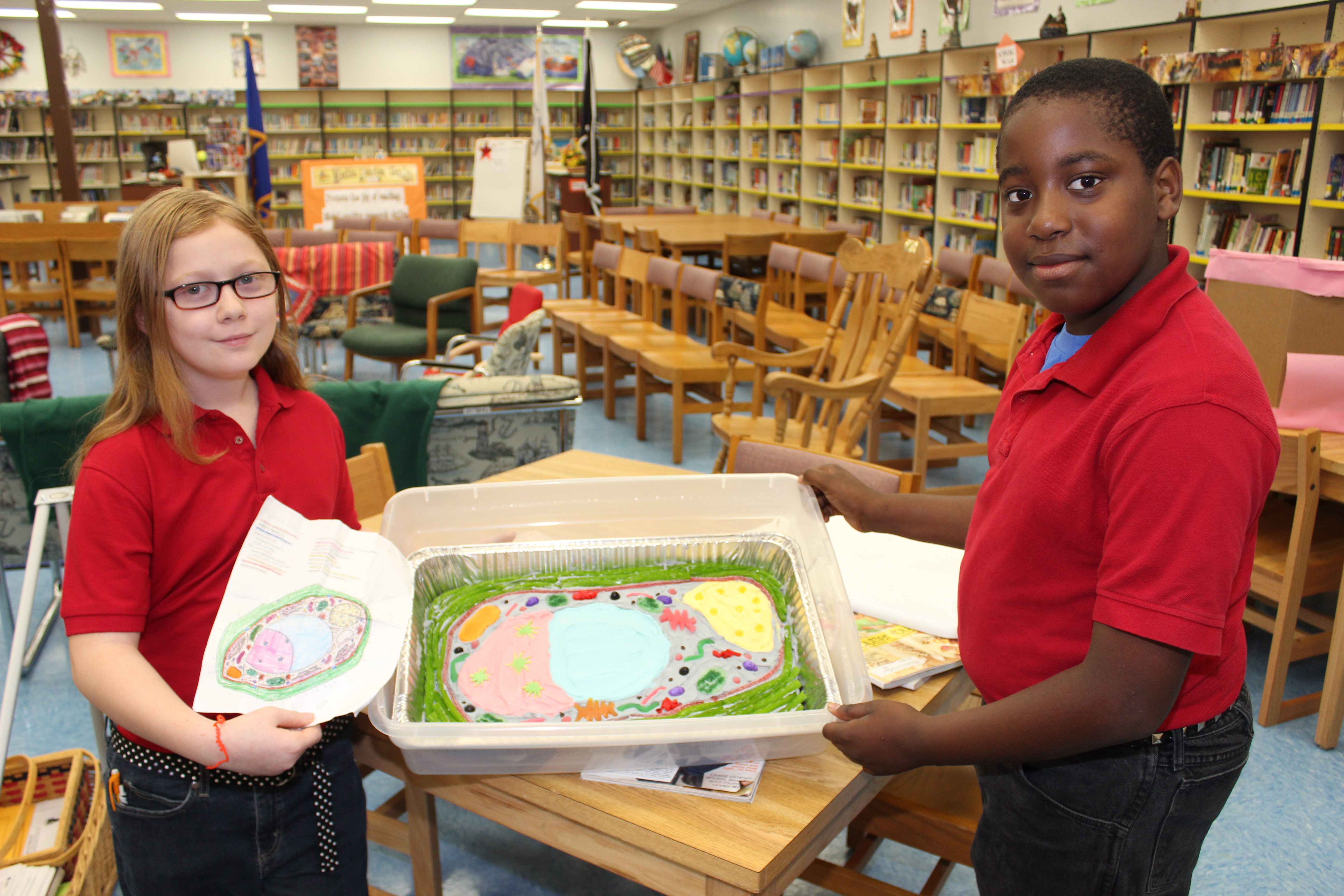 Northport K-8 sixth grade student Christina Lambert, left, a member of the Northstar team in Dr. Laura Woodworth’s Life Science class, uses her initiative and concocts an exact replica of a plant cell using homeade cake, frosting and different types of candy.  Christina shared her newfound knowledge of plant cells with Northport fifth grade student Omah Reid, at right, from Charlotte Tombline’s class.  Students are learning about plant and animal cells and the structure, function and
location of organelles.  Christina presented the intriguing lesson to Omah and her classmates to make the lesson pertinent.

Bayshore Elementary is very excited to support the community by participating in the March for Babies event this year at the Port St Lucie campus of Florida Atlantic University.  The money raised will support March of Dimes research and programs that help mothers have full-term pregnancies so babies can have healthy lives.  Bayshore Elementary staff members and students recently held a car wash and raised over $230 for this important cause.  Pictured is kindergarten student Zachary Comperchio doing his part to help! 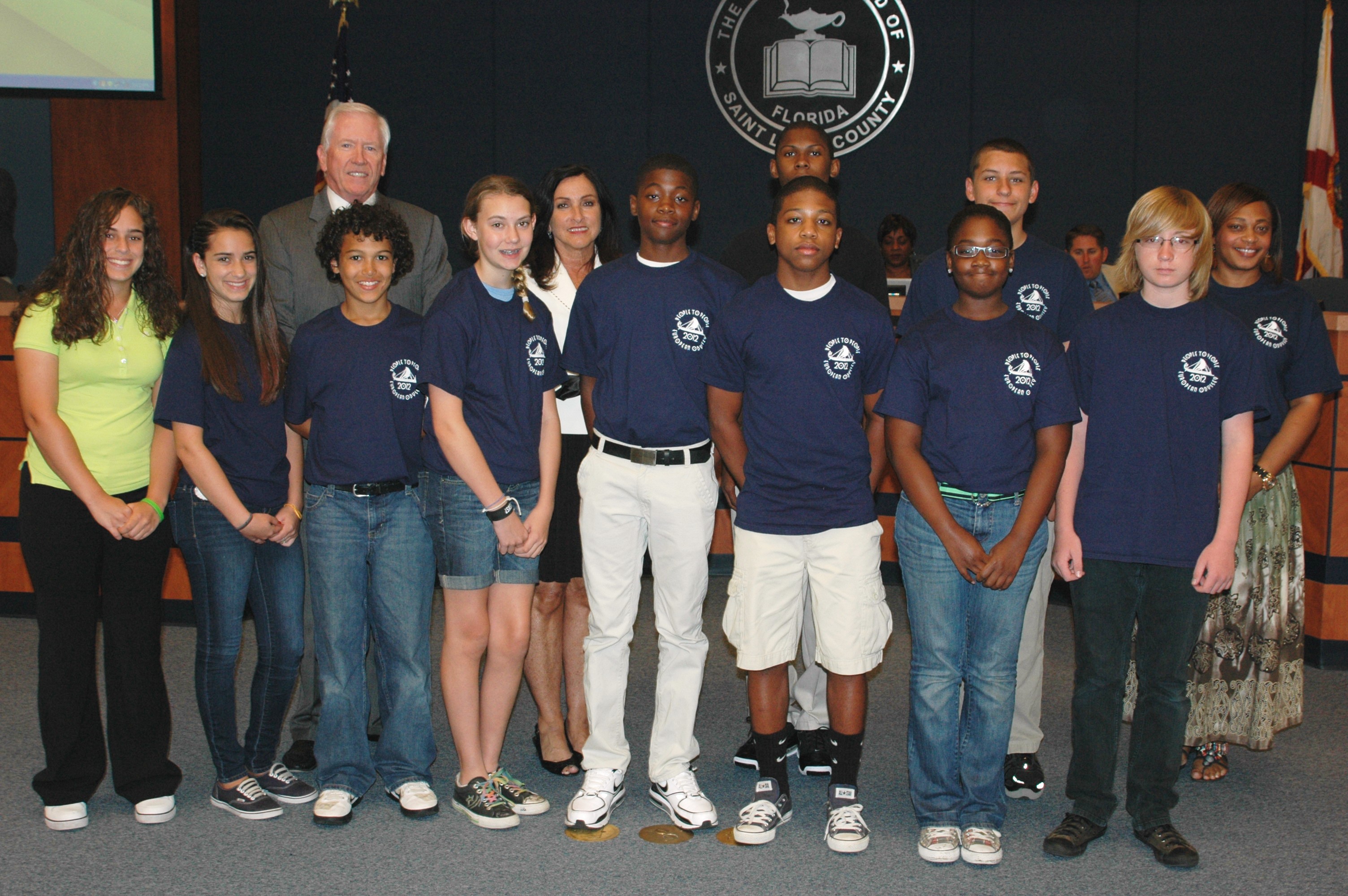 Ten students who will represent St. Lucie County in the middle school delegation for the People to People outreach program from St. Lucie County Schools were presented at the April 10, 2012, St. Lucie County School Board meeting. Desiree Hitchmon-Houghton, Teacher Delegation Leader at St. Lucie West K-8 School, will be traveling with the students from the Middle School Delegation to France, Italy and Greece this summer. The People to People program was founded by President Eisenhower in 1956 with the mission of promoting peace through understanding. He believed that if people of different countries came together and learned from one another they would promote peace better than governments could. Students travel as People to People Student Ambassadors to share ideas and learn firsthand how to become better global citizens. Pictured, front row, from left, Emily Marie Perez, Demi Perez, Robert Gilliom Jr, Amelia Stackwell, Myles Tullis, Jordan Wilkerson, Destyne Bailey, and Logan Coker. Back row, from left, Superintendent Michael Lannon, School Board chairman Carol Hilson, Malyk Payne, Alexander Snure and Ms. Houghton.