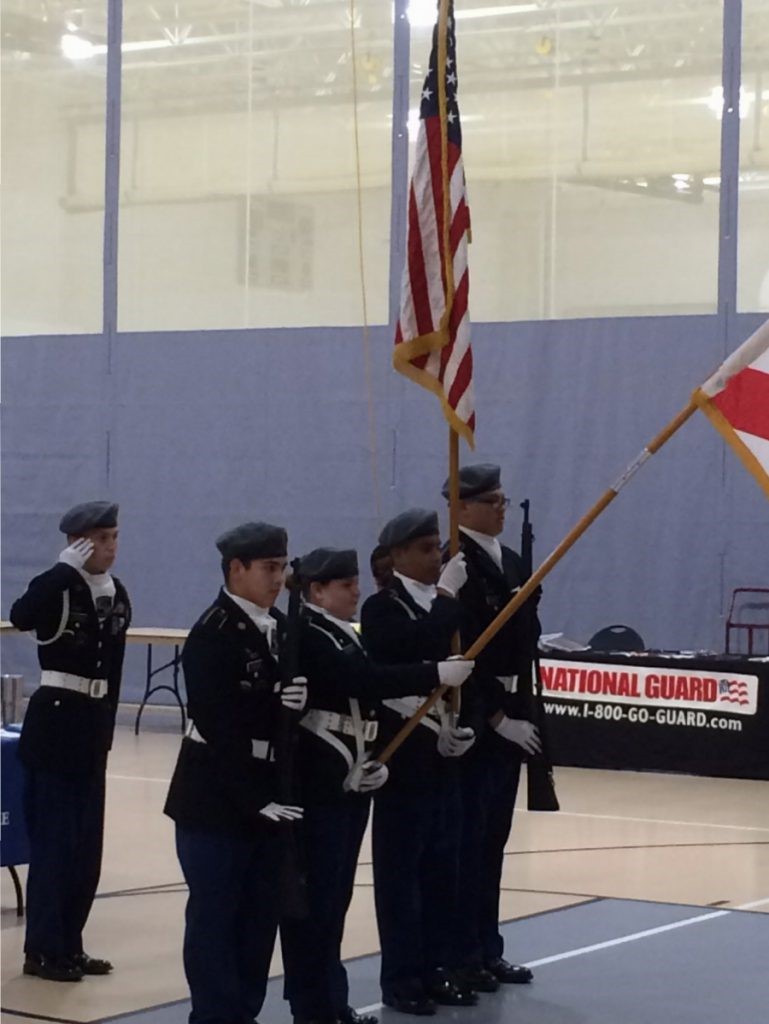 The Panther Battalion Color Guard was invited to present the colors at the “Lights on After School Event.”

The purpose of the event was to inform parents and students about various after school activities in the area.

Various other organizations were at the event, such as Boy Scouts of America, U.S. National Guard, and Boys & Girls Clubs of St. Lucie County.

The goal of the program is to get students engaged in after school activities. 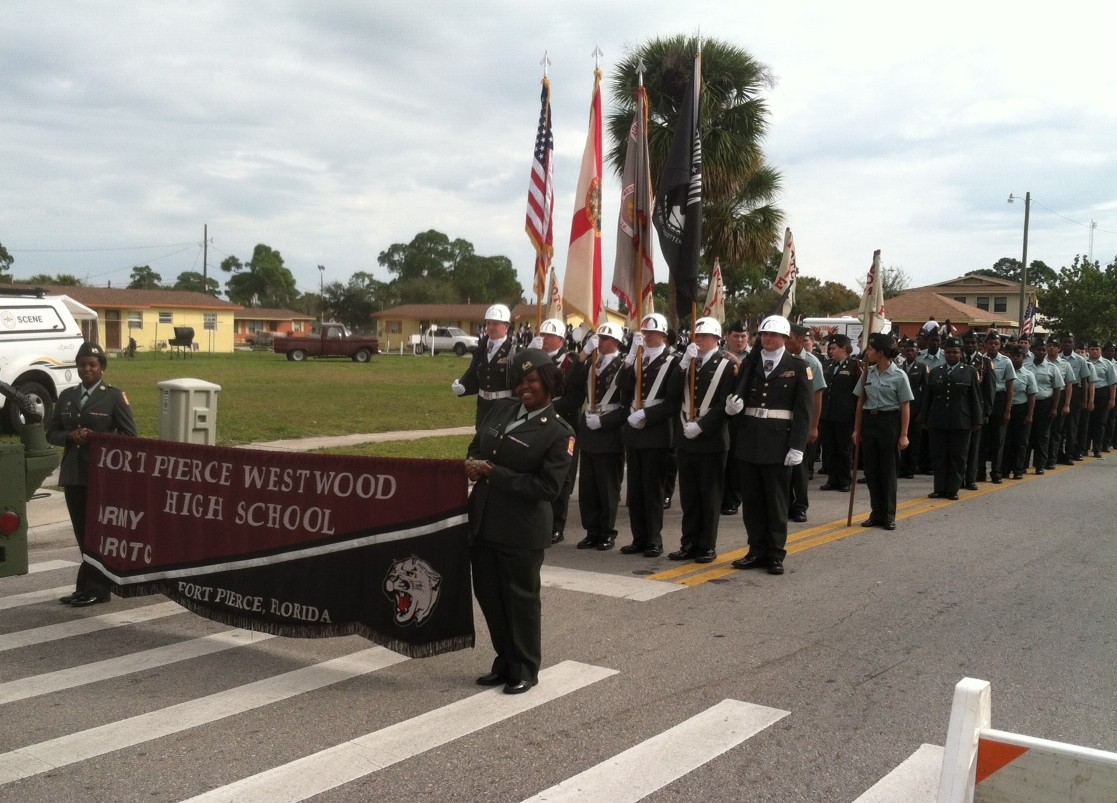 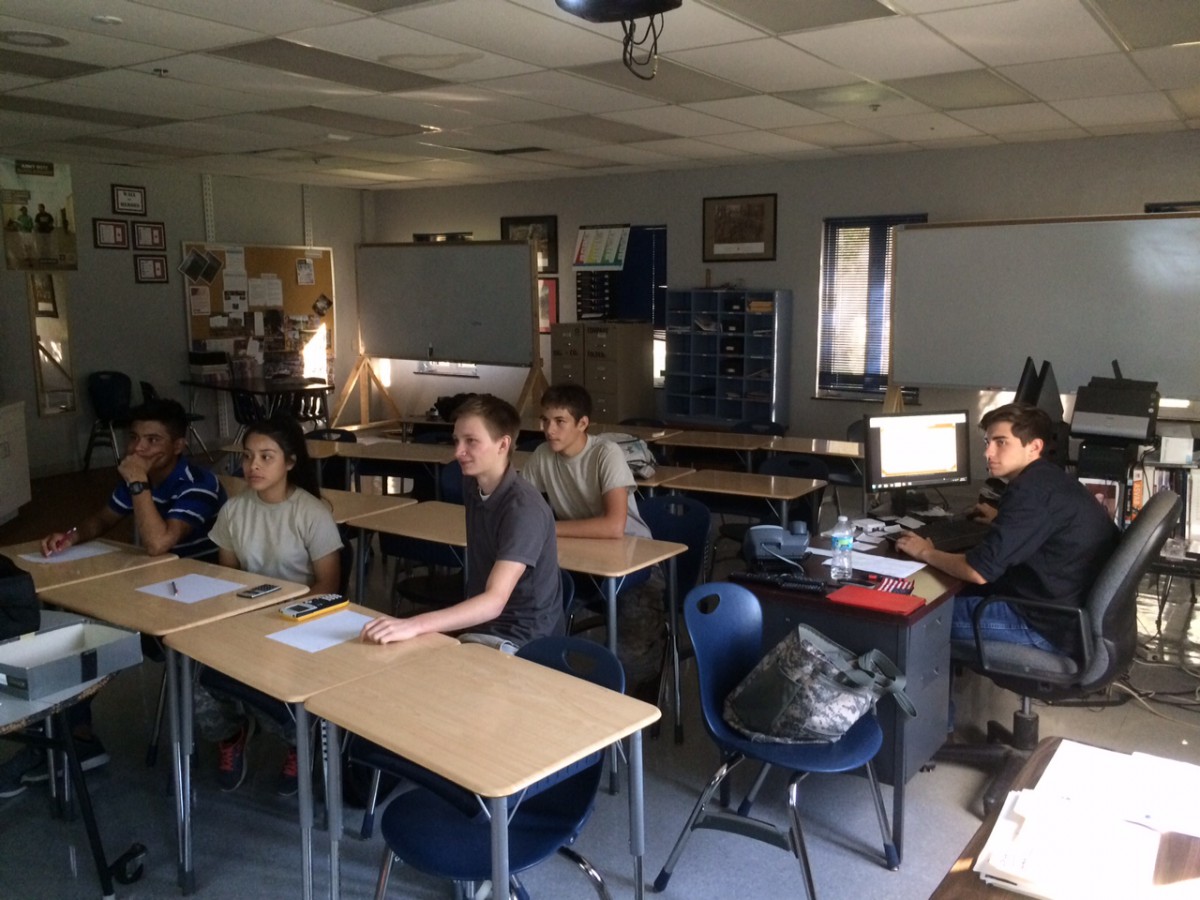 JLAB (Junior Leadership and Academic Bowl) is a program within JROTC sponsored by the College Options Foundation. Cadets have the opportunity to improve their ACT/SAT scores, increase interest in college admission, gain leadership skills, and advance hands-on learning. During the JLab competition, the team completed an academic test composed of three sections: verbal, math, and science. The team consisted of Cadets Andrews, Loschin, Soto, Flores, and the alternative Cadet Rigsby. The team worked together on the clock. In the end, the team received a score of 75% in the first level of the JLab academic competition. 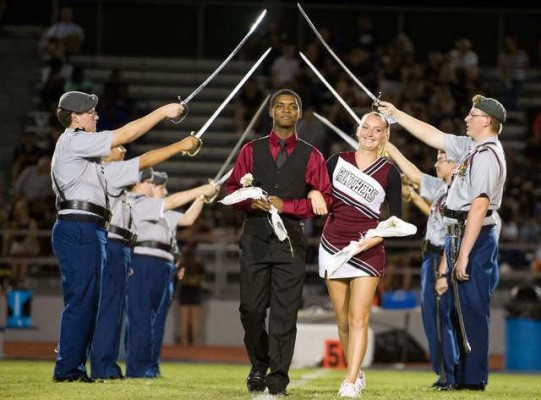 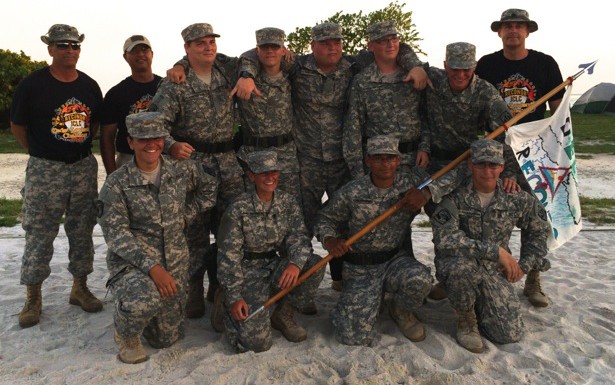 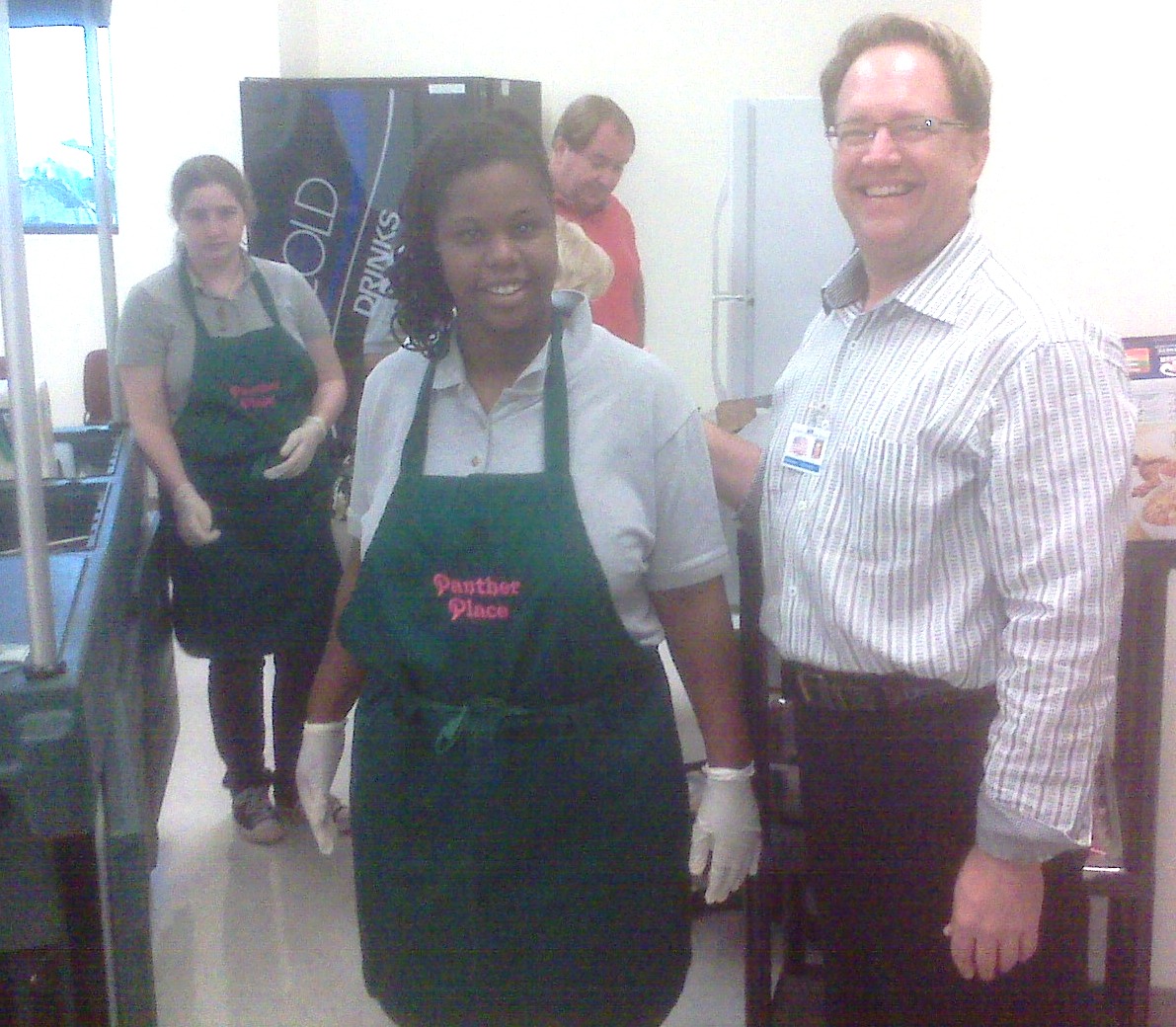 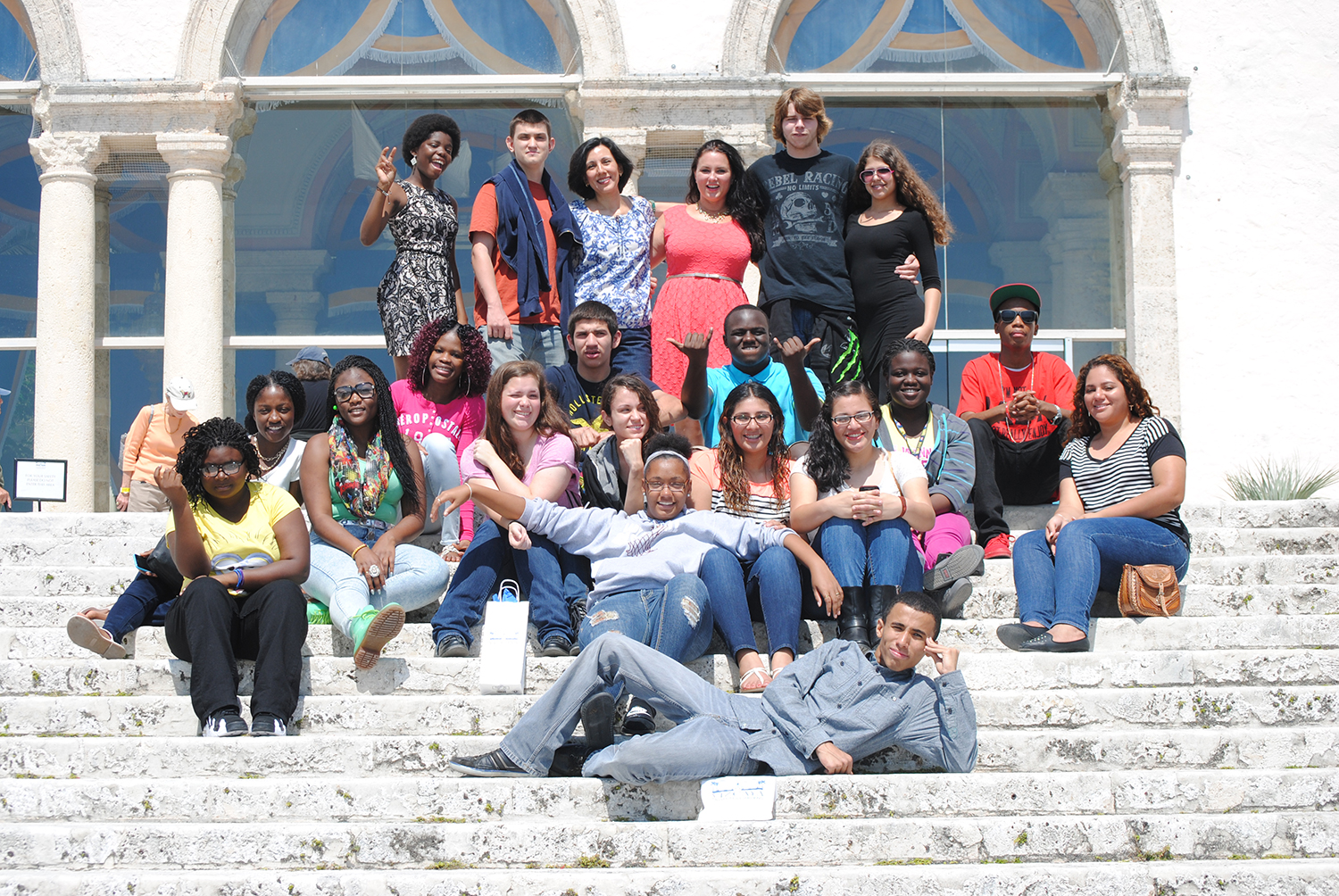 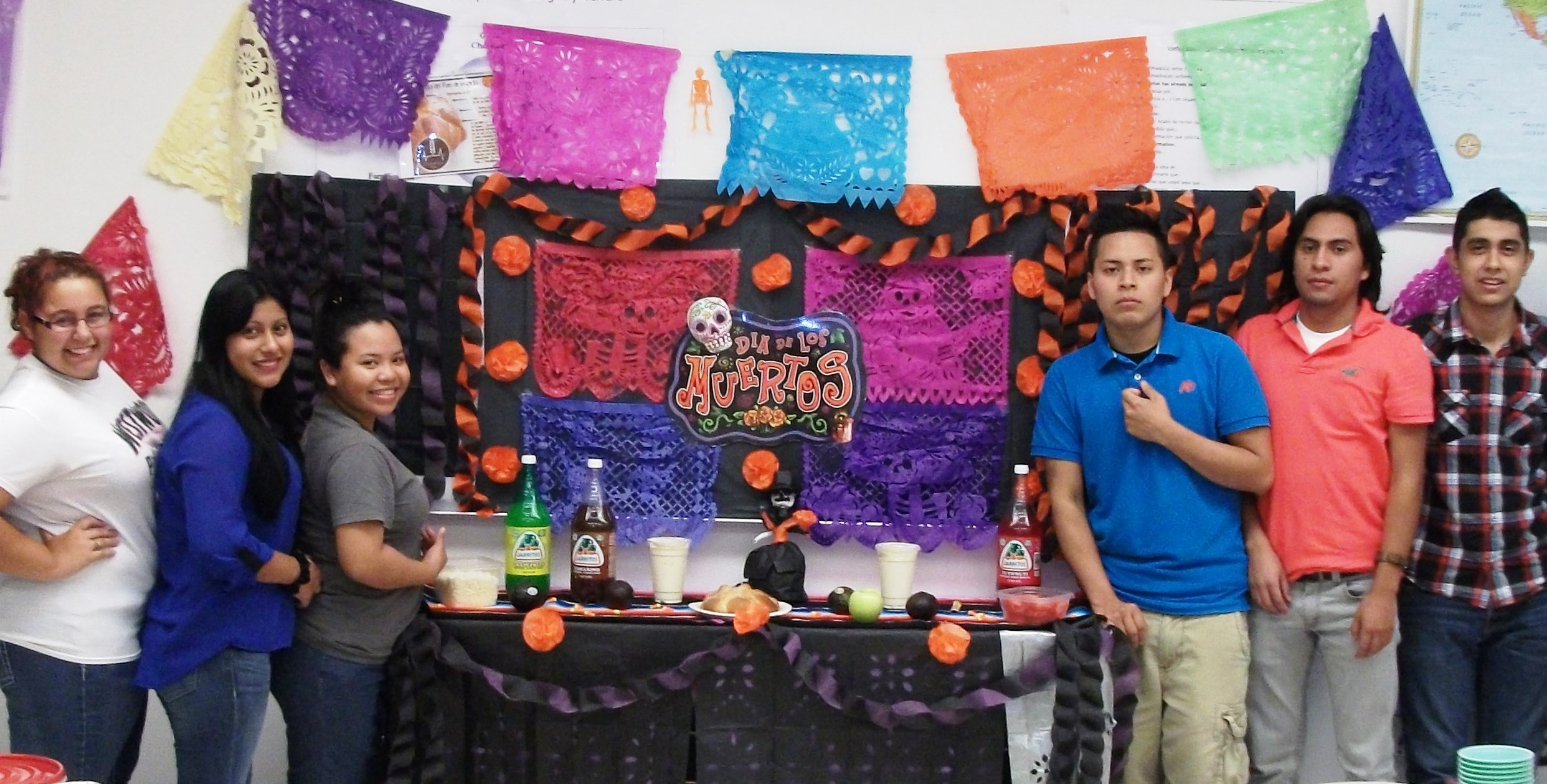 To allow students expand their horizons and express their creativity by experiencing an important holiday to Spanish speaking cultures, students from Isabel Denski’s AP Spanish class at Westwood High School created an altar in celebration of Día de los muertos (Day of the Dead) observed November 1 and 2. Ms. Denski explained the activity, that in Spanish culture, altars are built to honor the dead. Día de los Muertos celebrates the lives of the deceased with food, drink, and activities the dead enjoyed in life. With this activity, students learned the purpose behind it, how it is celebrated, and what it means to the culture. 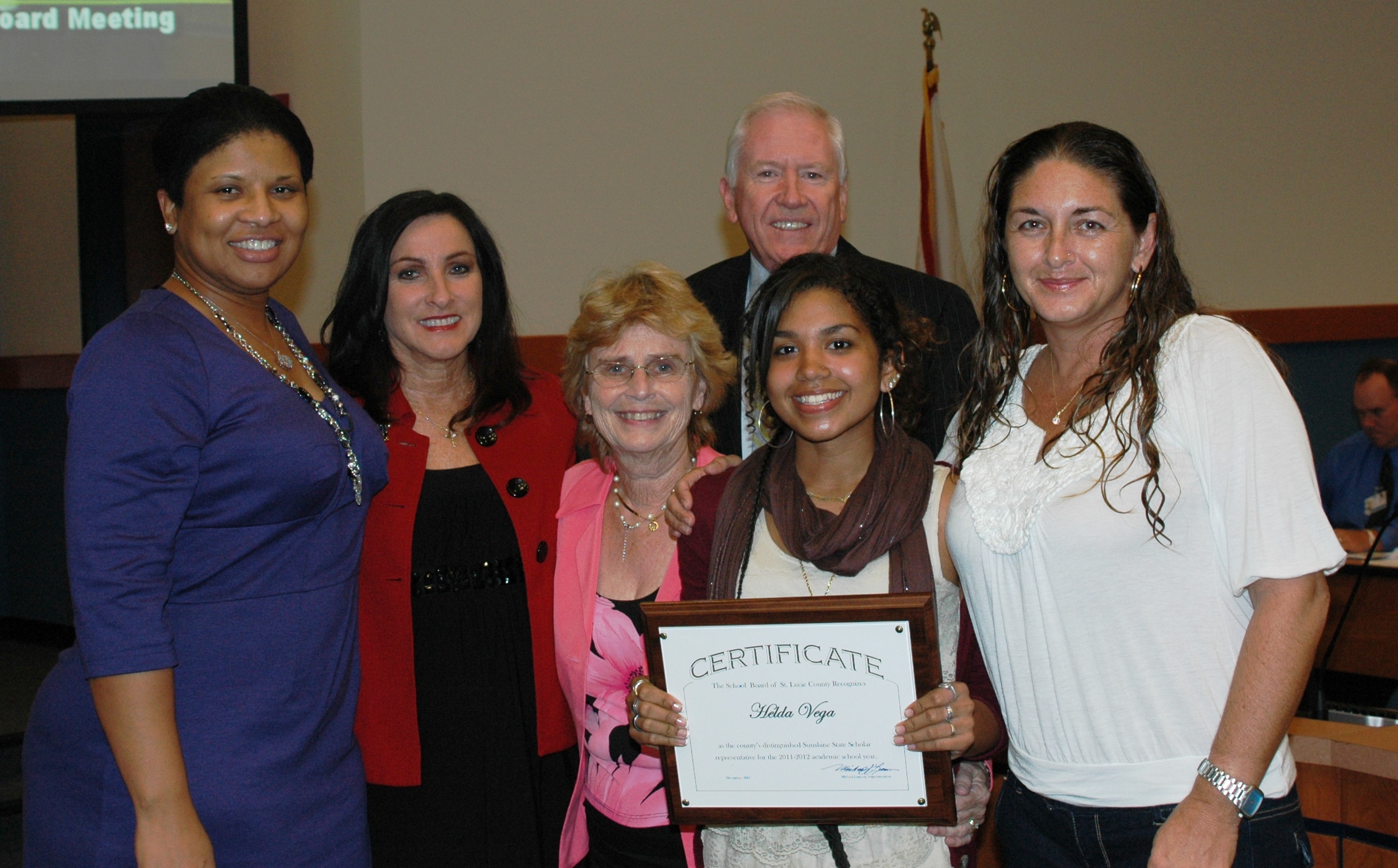 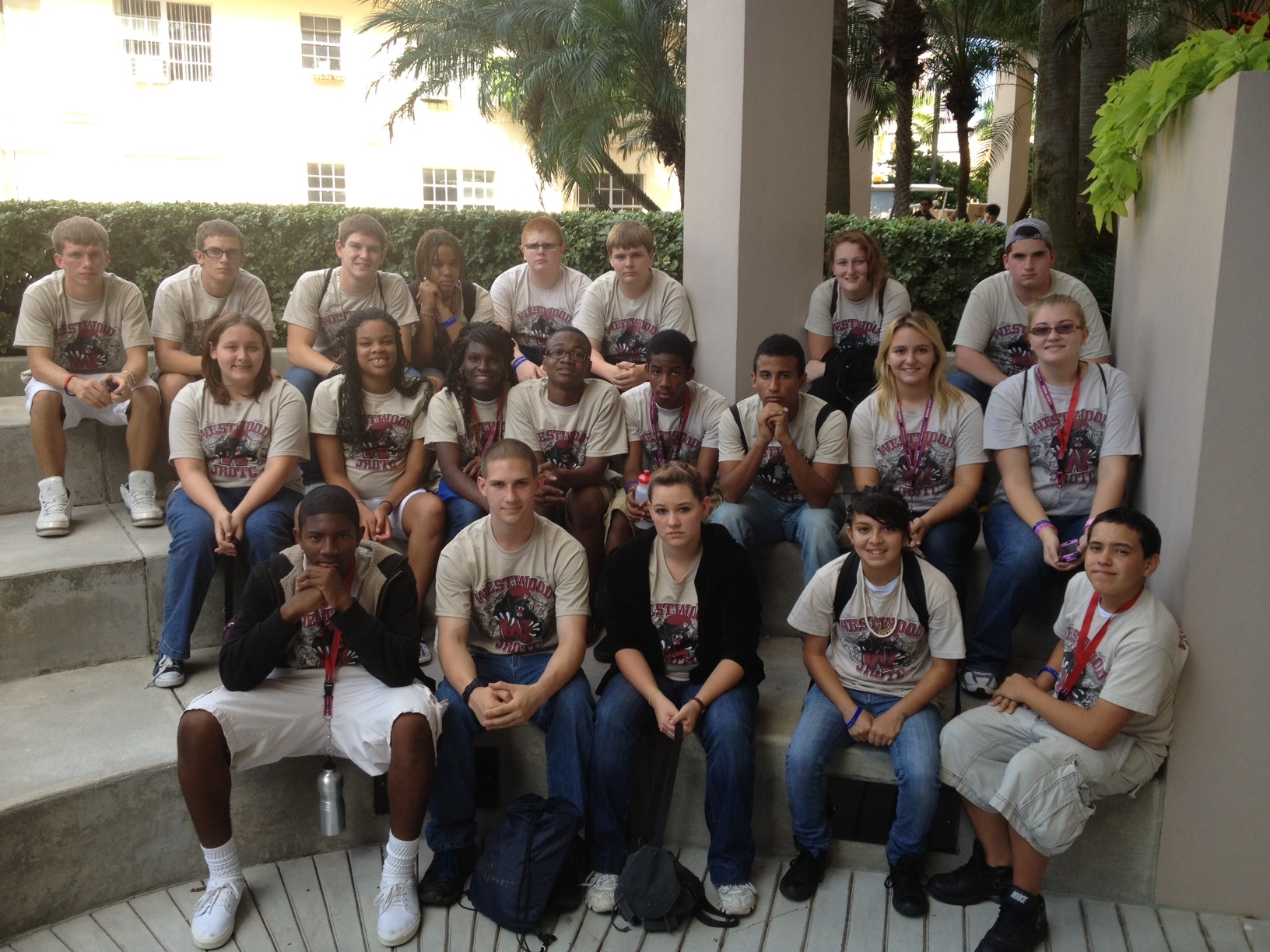 Fort Pierce Westwood High School JROTC cadets recently visited Palm Beach Atlantic University for annual Leadership Day. The Cadets were amazed by the campus life, the buildings where classes are held, and the attractive and convenient location of the school. They were afforded the opportunity to talk to some of the professors and the Professor of Military Science (ROTC) and ask questions relevant to their future in college, work place or military.  The group was also very impressed with the school’s cafeteria, which reportedly rivals top shelf restaurants. 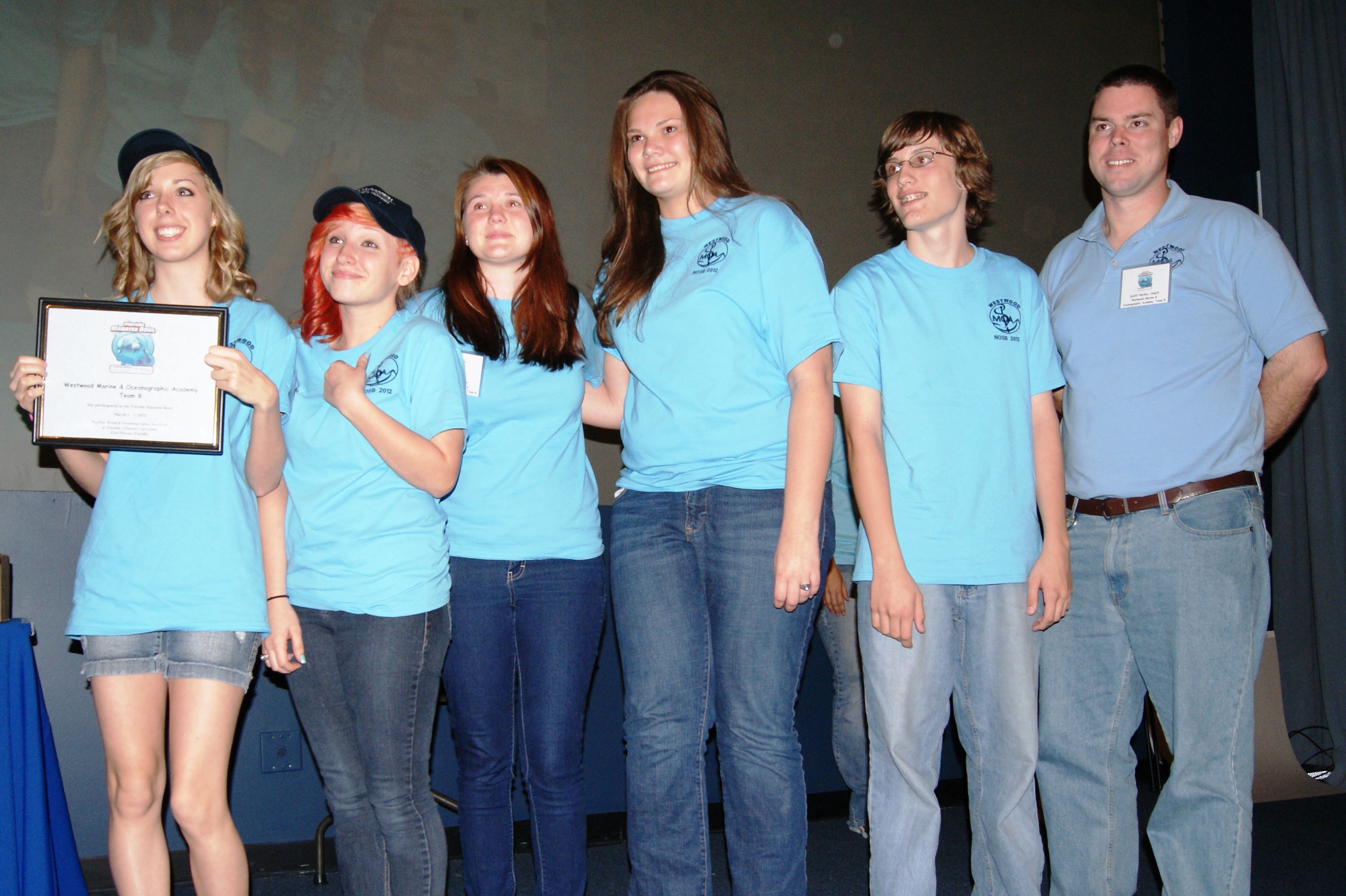 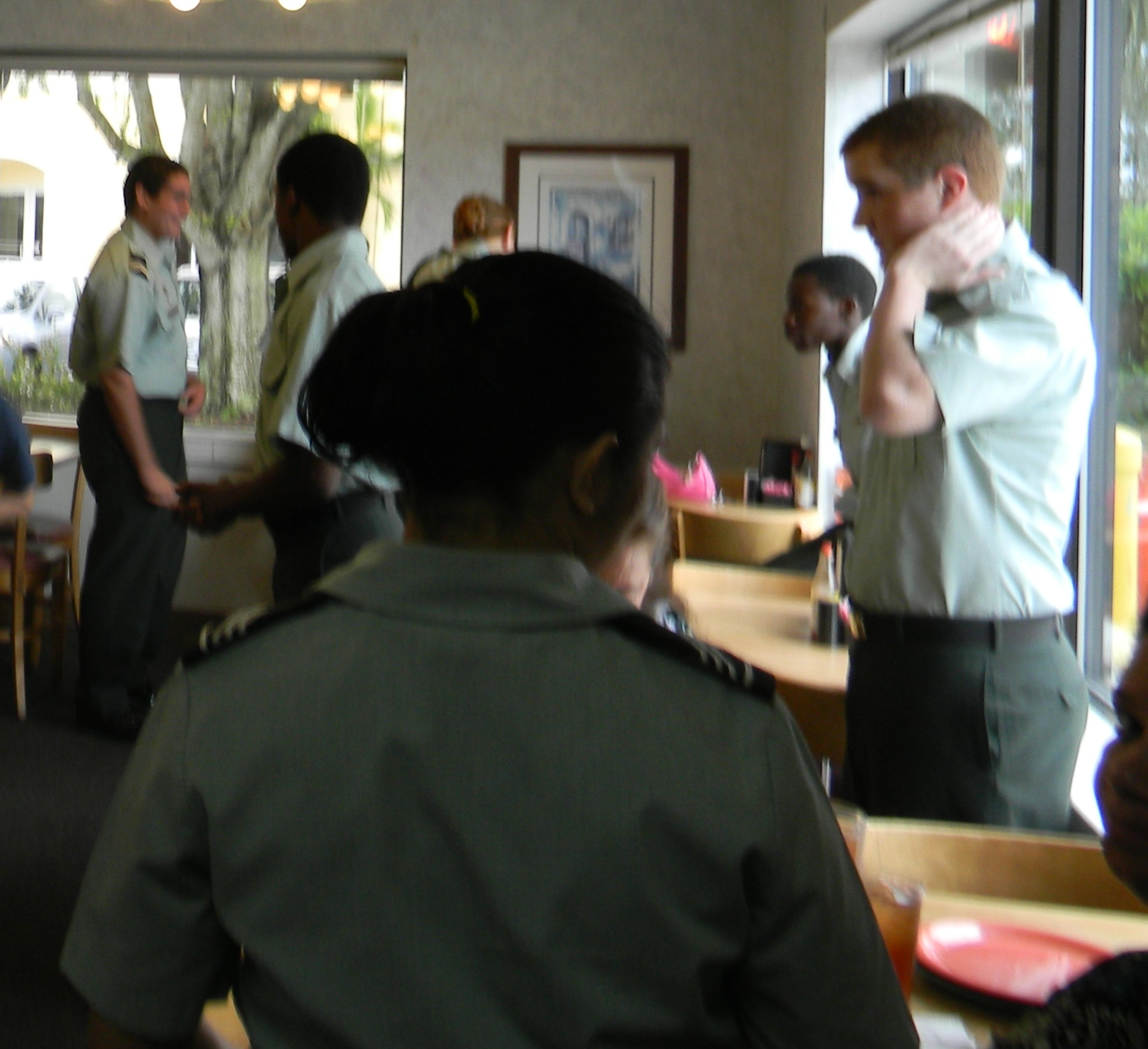 The cadets of Fort Pierce Westwood High School Panther Battalion recently held a highly successful fundraiser at a local restaurant. The cadets served customers their beverages, re-stocked the serving plates, cleaned tables and helped in any way they could. The cadets enjoyed the event, and earned compliments for their behavior, attitude and most of all their smiles. Pictured are several cadets during the event. 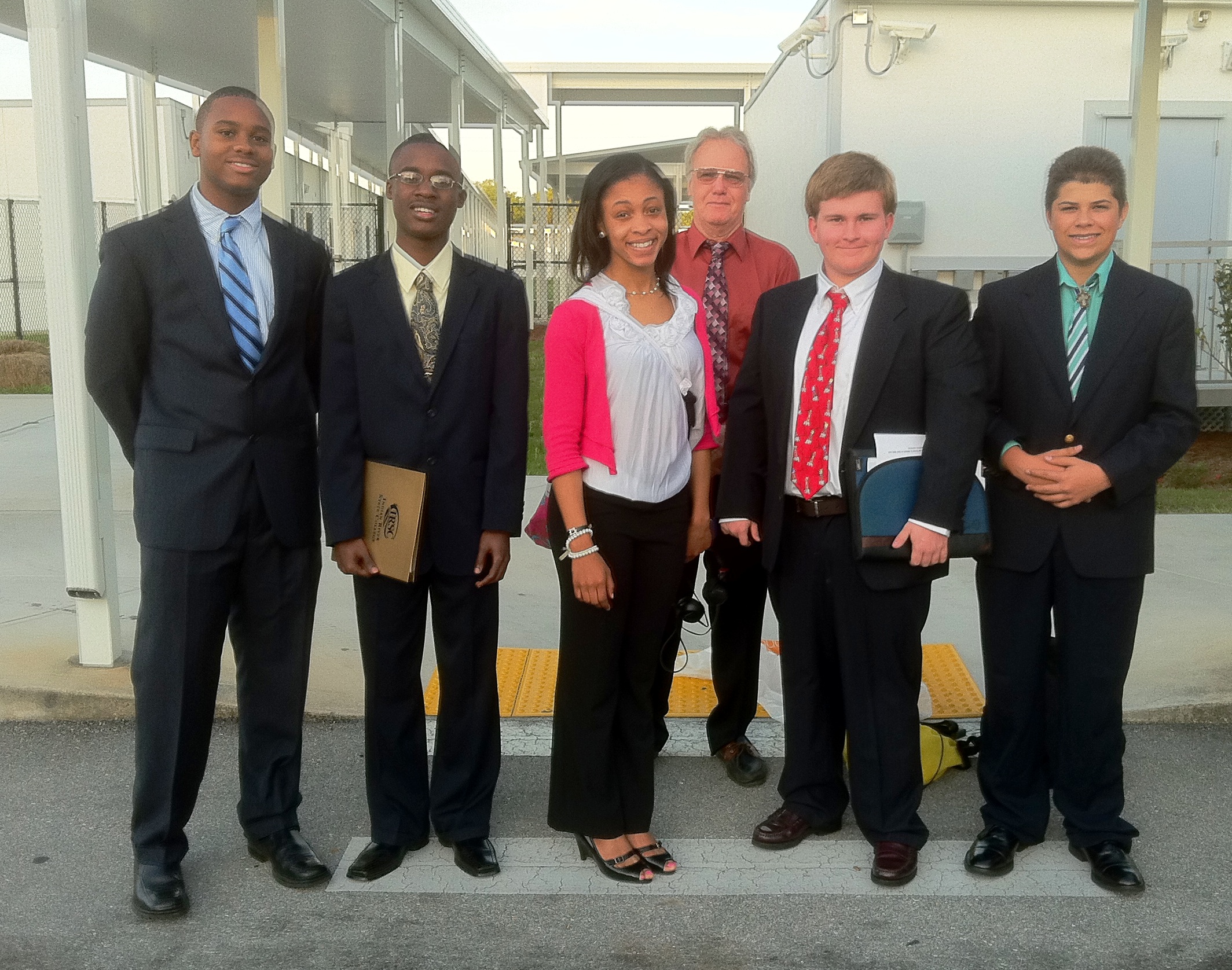 For the second year, a team of five Westwood High School students recently earned the opportunity to compete at the national level in the Euro-Challenge, an academic competition on students’ knowledge of the European monetary system. The Westwood team was the only freshman team to earn one of the top three spots in the regional contest in Miami recently, and will go on to New York in April for the national competition with two other Florida teams. The students spent over 45 hours of after school and time during Spring break conducting extensive research, participating in Webinars, and perfecting their presentations.  Pictured, from left, are Nathan Wyche, Rhyan Grant, Nyah Tennell, Coach Dennis Dawson, James Rhees Kaufman, and Zachary Taylor. They now join their peer Westwood team preparing for the national Ocean Bowl spending extended hours working on presentions and acquiring all the new information that they will need to be competitive. 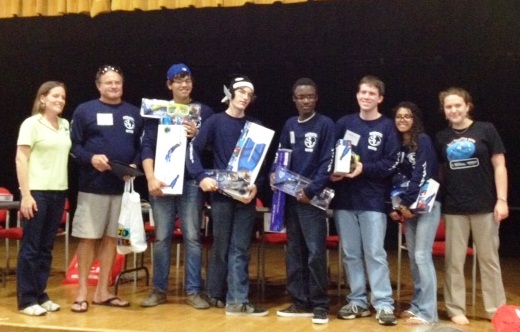 A team of students from Ft. Pierce Westwood’s Marine Oceanographic Academy (MOA) placed second in the 15th annual Manatee Bowl, an annual, regional ocean science competition. A team from St. Lucie West Centennial High School joined in the competition against 20 teams from 14 schools from the east coast of Florida. The teams are tested through quick Jeopardy-style questions and thought-provoking team challenge questions. Questions are drawn from the scientific and technical disciplines used in studying the oceans — physics, chemistry, geology, atmospheric science, biology, national and international economics, history and culture. The regional competition alternates annually between the University of Miami (UM) Rosenstiel School of Marine & Atmospheric Science and Florida Atlantic University’s Harbor Branch Oceanographic Institute in Fort Pierce. The MOA team was undefeated entering the final round, thus securing one of the two top spots, but two losses to Archimedean Upper Conservatory School in the championship round ended MOA’s two-year reign as champion. The winning team from the regional competition is eligible to compete in the national competition, which this year is set in Milwaukee, Wisconsin. Pictured in the navy team tee shirts, from left, are team coach Scott McMillen, Ludwin Vielman, Jeremy Johnson, Rhyan Grant, Graham Oreo,and Roxy Vega, flanked by two members of the UM staff. 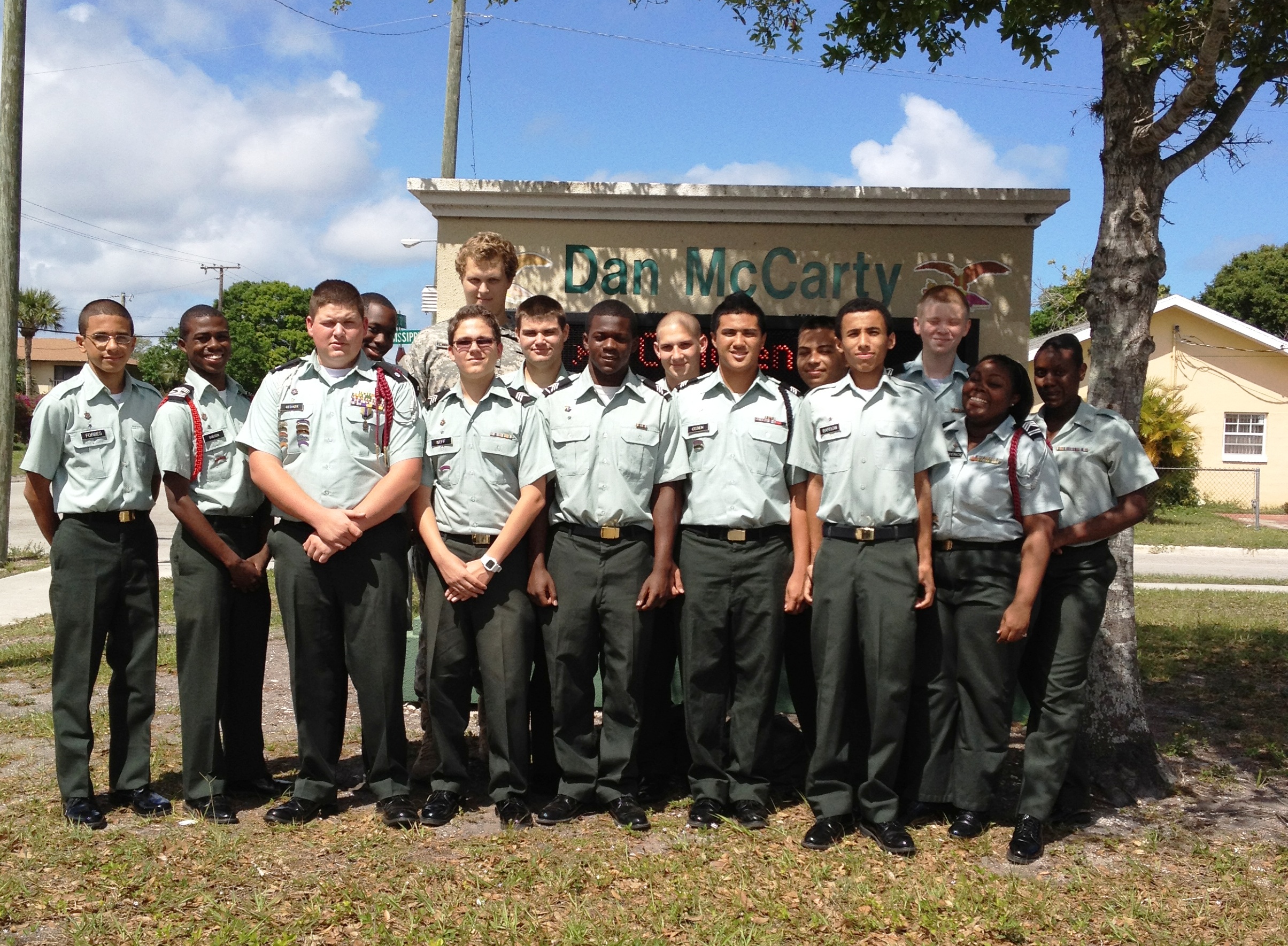 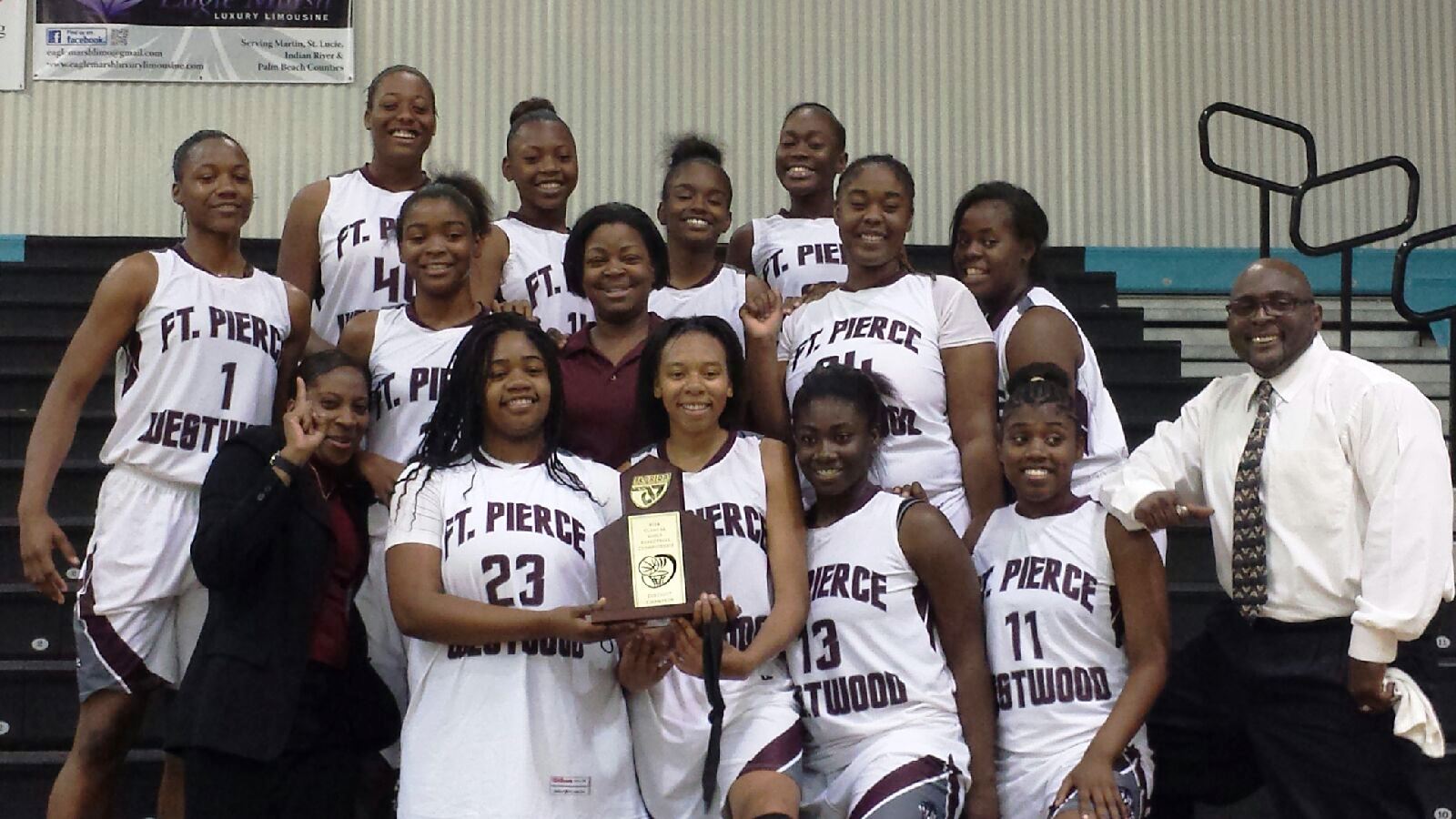 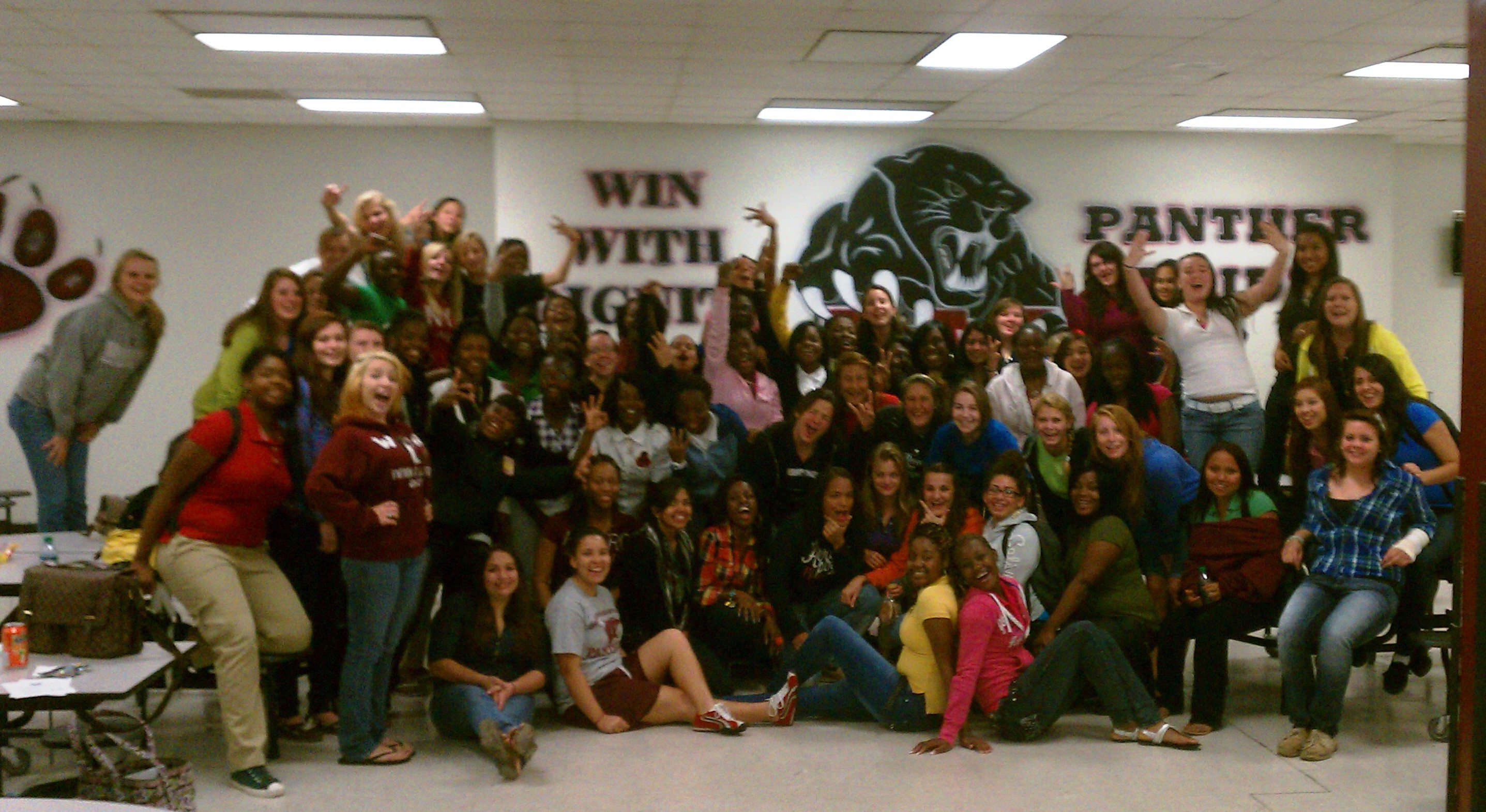 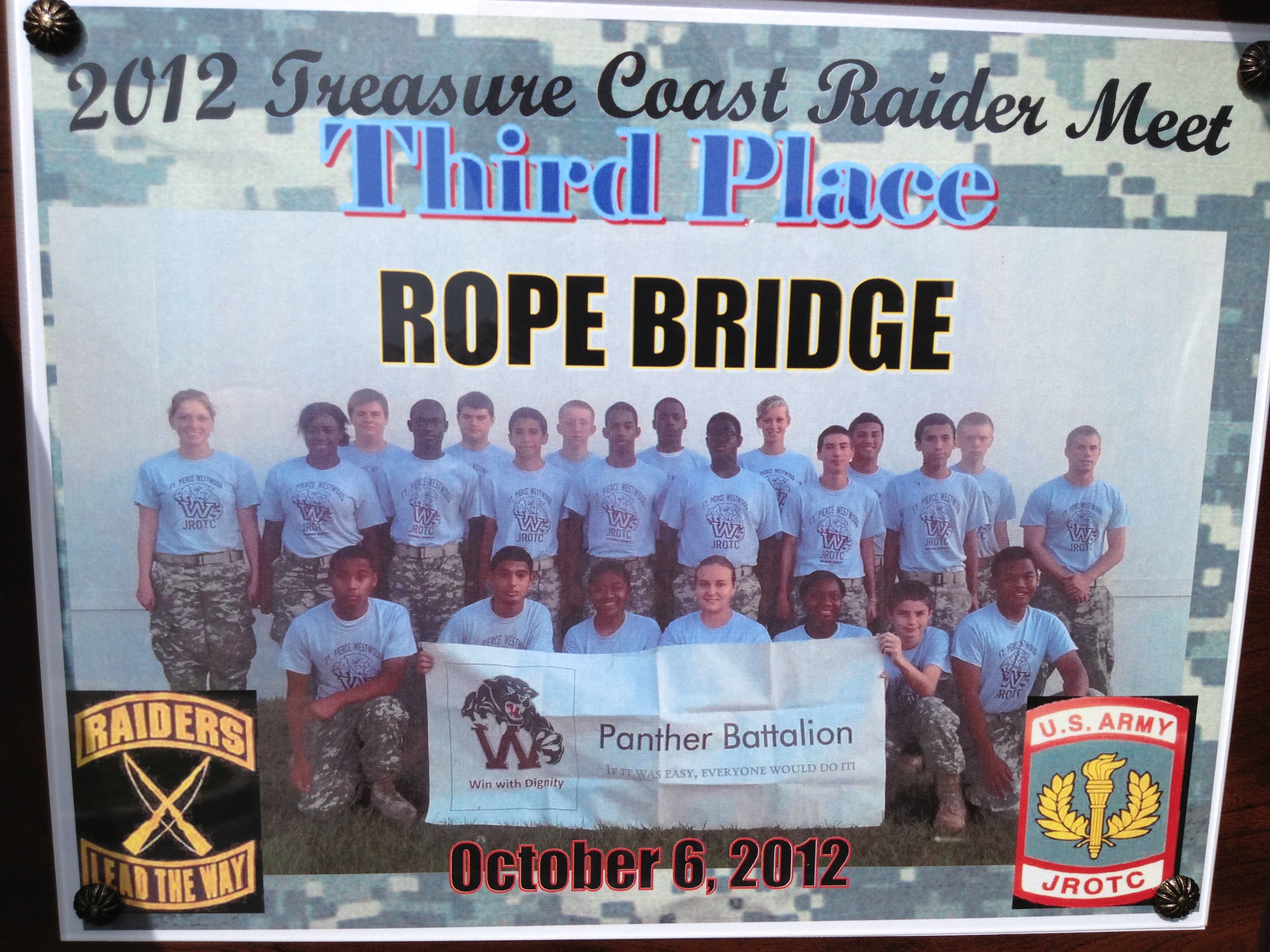 The Fort Pierce Westwood High School JROTC cadets recently participated in the Treasure Coast Raiders competition hosted by Port St Lucie High School. The Panther Battalion participated in a one-mile run, push-ups, sit-ups, litter carry, rope bridge and obstacle course, and placed third overall on the rope bridge. One cadet remarked it was the most fun he had ever had, and many were surprised at how well they performed. Pictured is the Panther Battalion team. 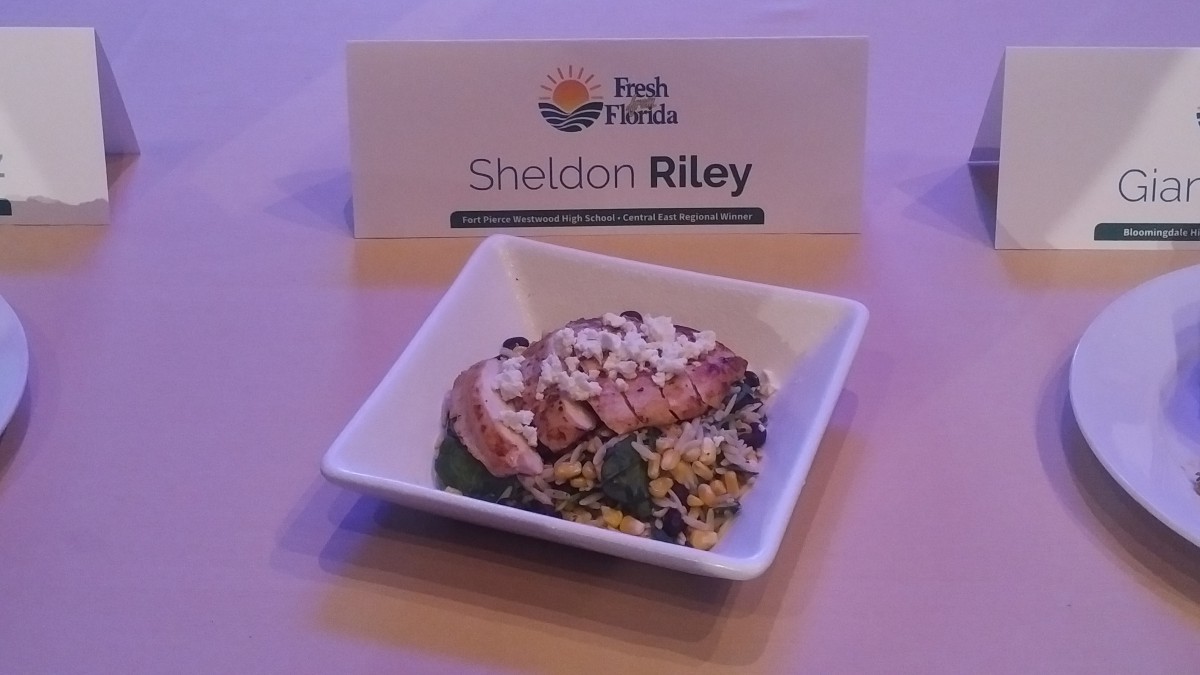 The competition included students in grades nine through 12 from across the state who were challenged to prepare original dishes featuring at least one Florida-grown fruit or vegetable for a panel of judges. Recipes from the top five finalists will be converted into school meal service portions and accessible to sponsors throughout the state.

“A healthy diet is the foundation of academic success, and this competition is a fun way for students to learn how to incorporate wholesome ingredients into their daily lives,” said Commissioner of Agriculture Adam H. Putnam.

For more information on the “Fresh From Florida” Student Chef Cook-Off, visit FreshFromFlorida.com/StudentCookOff.