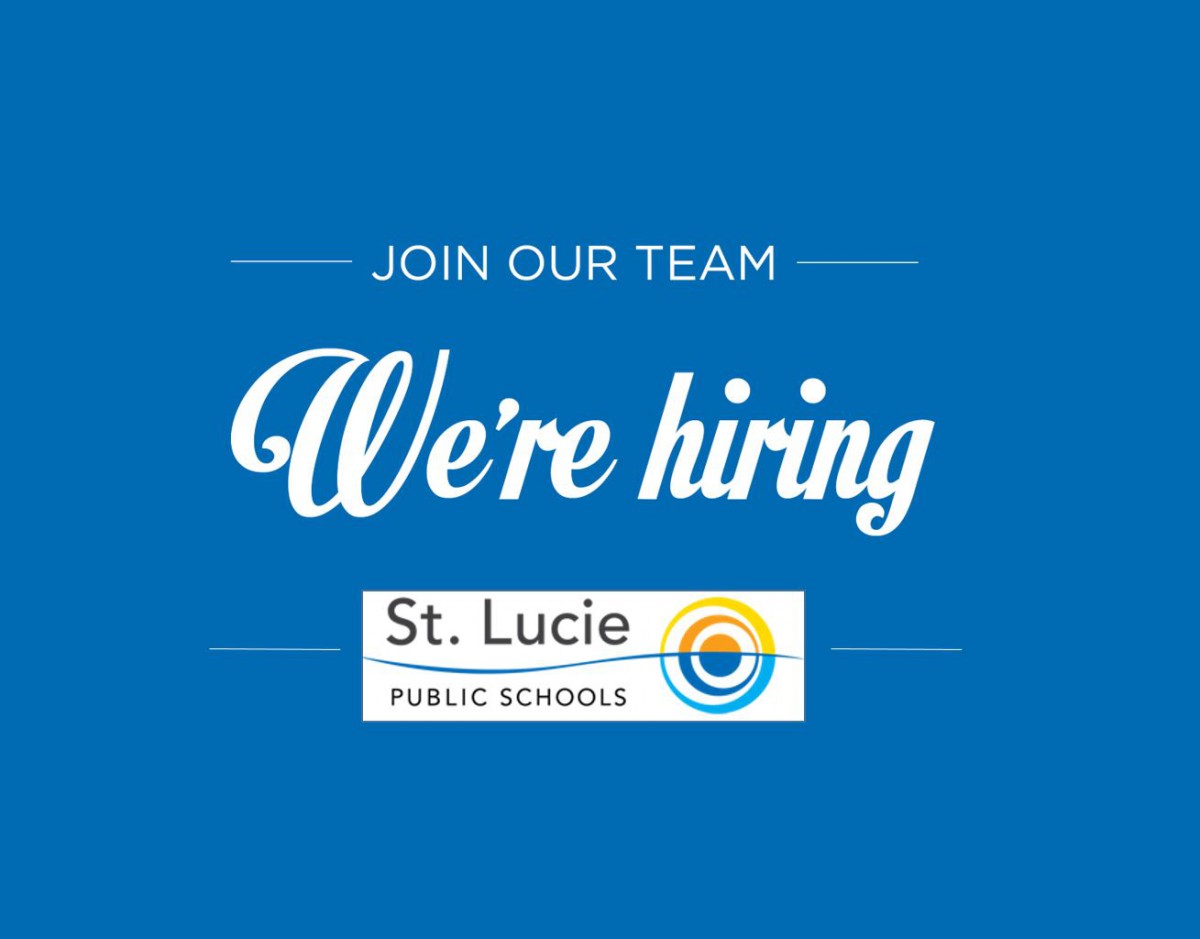 St. Lucie Public Schools is searching for high-quality candidates to  Create, Motivate, Inspire, and Teach students in all grades and subject areas.  Whether you hold a teaching certificate, statement of eligibility, or Bachelor’s Degree and have considered teaching as a career we invite you to investigate the possibilities.  St. Lucie Public Schools is the largest employer in the county.  We offer competitive salary and benefits, perks and discounts to sites and services and referrals for discounts on local rents or associated fees.  Visit our website at  Why St Lucie and visit our Teacher Career Fair. 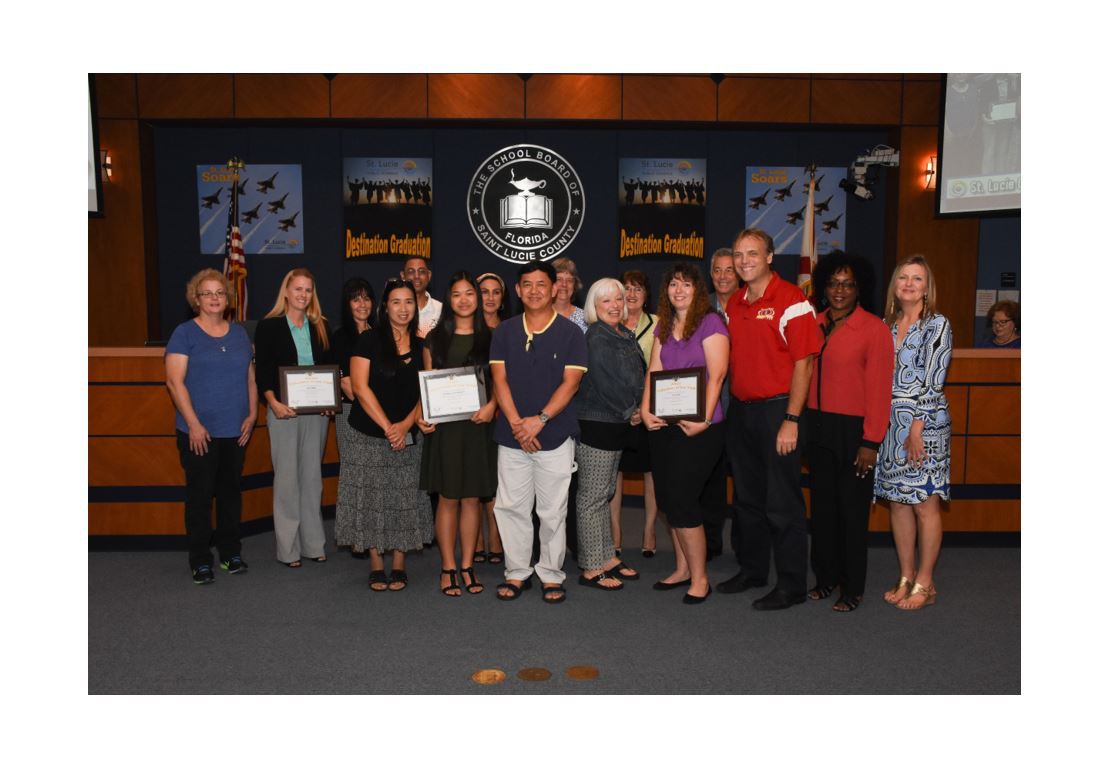 Volunteers of the Year

The Senior, Adult, and Youth Outstanding School Volunteer Awards were presented by Volunteer Coordinator Martha Underwood during the June School Board Meeting.  Sharing the valuable qualities of each shining individual, Mrs. Underwood highlighted their service to schools and children.

Volunteers are vital to the success of school programs, and SLPS is very appreciative of the countless hours, energy, and compassion its school volunteers generously donate each year.  Thank you, and congratulations! 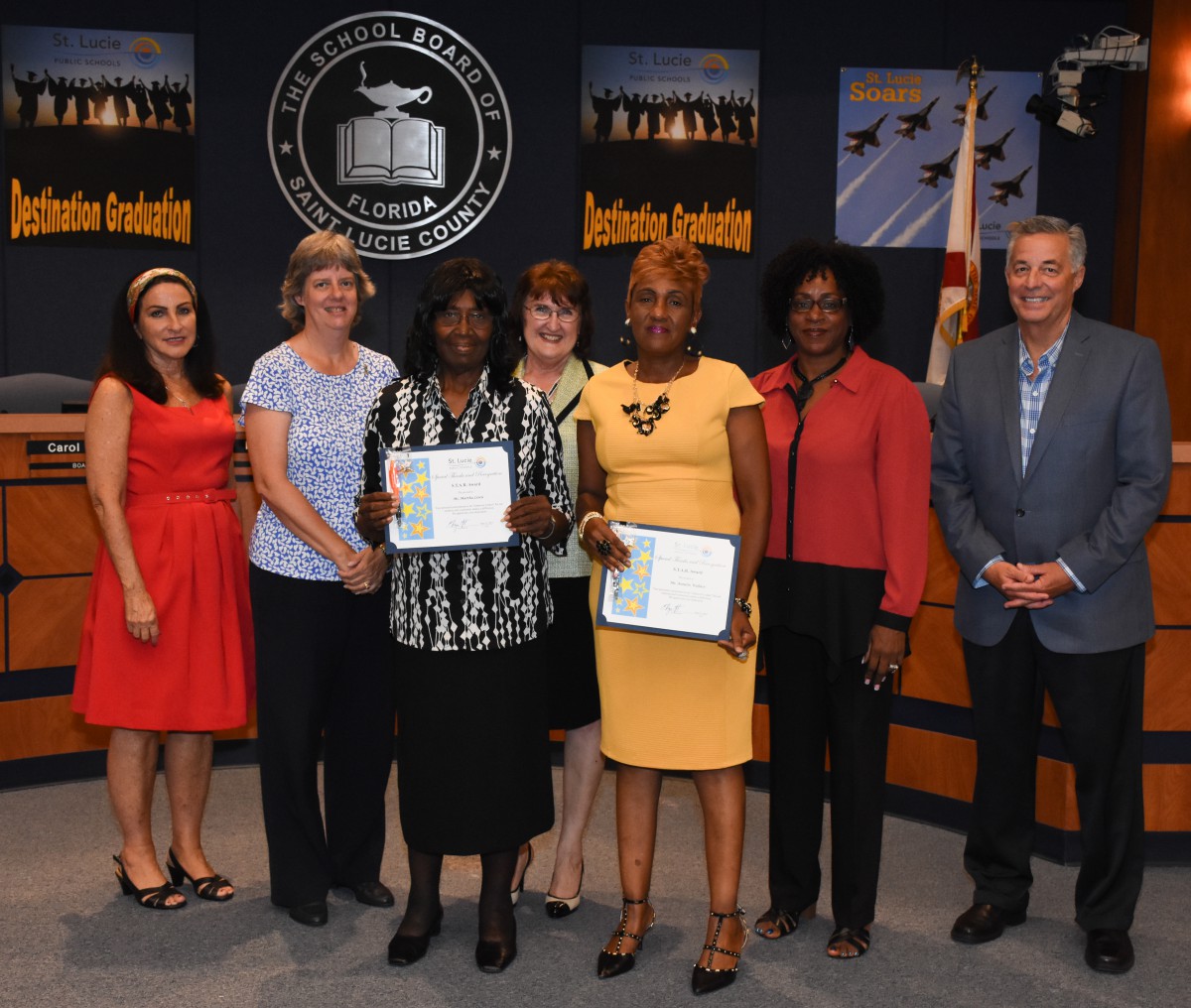 At the June School Board Meeting, Crossing Guards Martha Lewis and Annette Wallace were recognized as STAR Award recipients for outstanding service to children and their community.

Their positive contribution to the safe passage of students to and from school was appreciated by a citizen and shared with the District.  Both Ms. Lewis and Ms. Wallace are to be commended on their diligence at keeping children safe and drivers in check with safe speeds at the intersection of 13th Street and Virginia Avenue.

We thank you and congratulate you for your service! 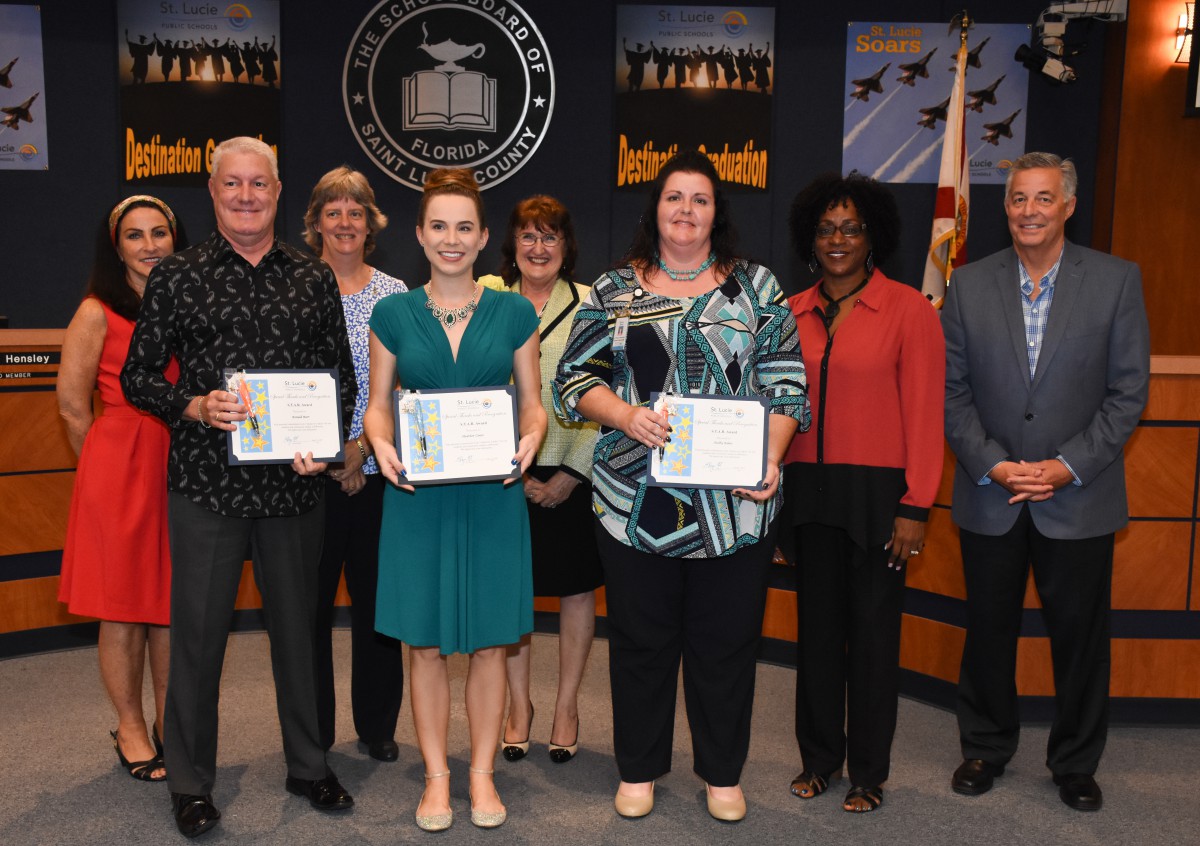 These members of the SLPS Human Resources Team were recognized at the June School Board meeting for their concentrated efforts on monitoring needs for and supporting efforts for teacher certification renewals, updates, and the like.  St. Lucie Public Schools is making positive strides in the area of recruitment and retention as it prepares for another banner academic year.

May was a banner month for student participation in State and international competitions, and the District is proud to celebrate students’ accomplishments.

Students in 7th grade classrooms in St. Lucie County have a unique opportunity to learn how our government works in their Civics classrooms. Each year they identify a local or State issue, research the levels of government needed to be influenced, the positives and negatives of possible solutions, and ultimately create an action plan. Students learn about public policy and the interaction of citizens and the government through their research.

This year, 18 schools participated at the District Showcase in January and three projects were sent to the first round of the State competition. Their research was displayed in the Capitol Building where Florida law makers has the opportunity to view each project. All three groups from St. Lucie were invited to compete in the State finals held in Palm Beach Gardens in May. The judges’ feedback was very positive and each group was commended on their passion, poise, and preparation.

Each year students in 6th, 8th, 10th, and 11th grade research historical topics under an annual theme. This year’s theme was Taking a Stand in History. Students were able to showcase their work in 5 categories: Exhibit, Documentary, Website, Performance, or Research Paper. The District Fair was held in January, and 21 school participated with a total of 259 students.

The State History Day competition was held at Tallahassee Community College on May 8th. Over one thousand students competed with over 650 entries. Of those, 45 students with 30 entries were from St. Lucie County.

“Angel” Vo from Port St. Lucie High School was awarded the Florida Heritage Award and the Outstanding County Award for her website on the environmentalist Marjorie Harris Carr and her stand against the cross-Florida barge canal.

The students who attended the State History Day competition are already thinking of next year’s theme which is Conflict and Compromise in History.

Based on the project selection criteria from the Regional Fair, top-ranking students were selected to advance to the State Fair.  Escorted by their chaperones, they ventured from St. Lucie County to Lakeland for the three-day event.  Once there, they had the opportunity for their projects to be judged, to network with others, to engage in inquiry and problem solving, and to glean ideas for future exploration.

Haniya Shareef, a senior at Lincoln Park Academy, is no stranger to innovation as her ratings at this year’s State Science and Engineering STEM Fair and Competition prove.  Her individual project, “Molecular Characterization and Enhanced Efficacy of a Novel Host-Specified Bioherbicide Candidate for Cyperus Rotundus T,” entered in the Plant Sciences Category was awarded First Place and the Division Grand Award.  In addition, Shareef was one of only eight students throughout the entire state of Florida whose project was selected as Best in Show.  The other St. Lucie County students participating in the State Fair also returned to the District laden with accolades for their ingenuity and creativity.

First Place, Division Grand Award, Best in Show (1 of 8 to receive this distinction)

“The Effect of Indole-3-Acetic Production by Lactobacillus Acidophilus”

“Improving Health of Beneficial Insects through Ingestion of Nonpathogenic Indovirus”

“Ugh! Another Invasive Weevil in Florida”

“Can Human Fecal Specific Primers Be Used to Detect Fecal Contamination in Sediment and Muck Samples?”

“Mitigating the Effects of IED Explosion Through Novel Hull Design”

*Best In Fair Award at the Star Science Fair

At the International Science Fair, Haniya Shareef was awarded 4th place for her project, and Shreya Reddy also made a positive presentation to the international judges in Los Angeles at this prestigious gathering of genius from around the world.