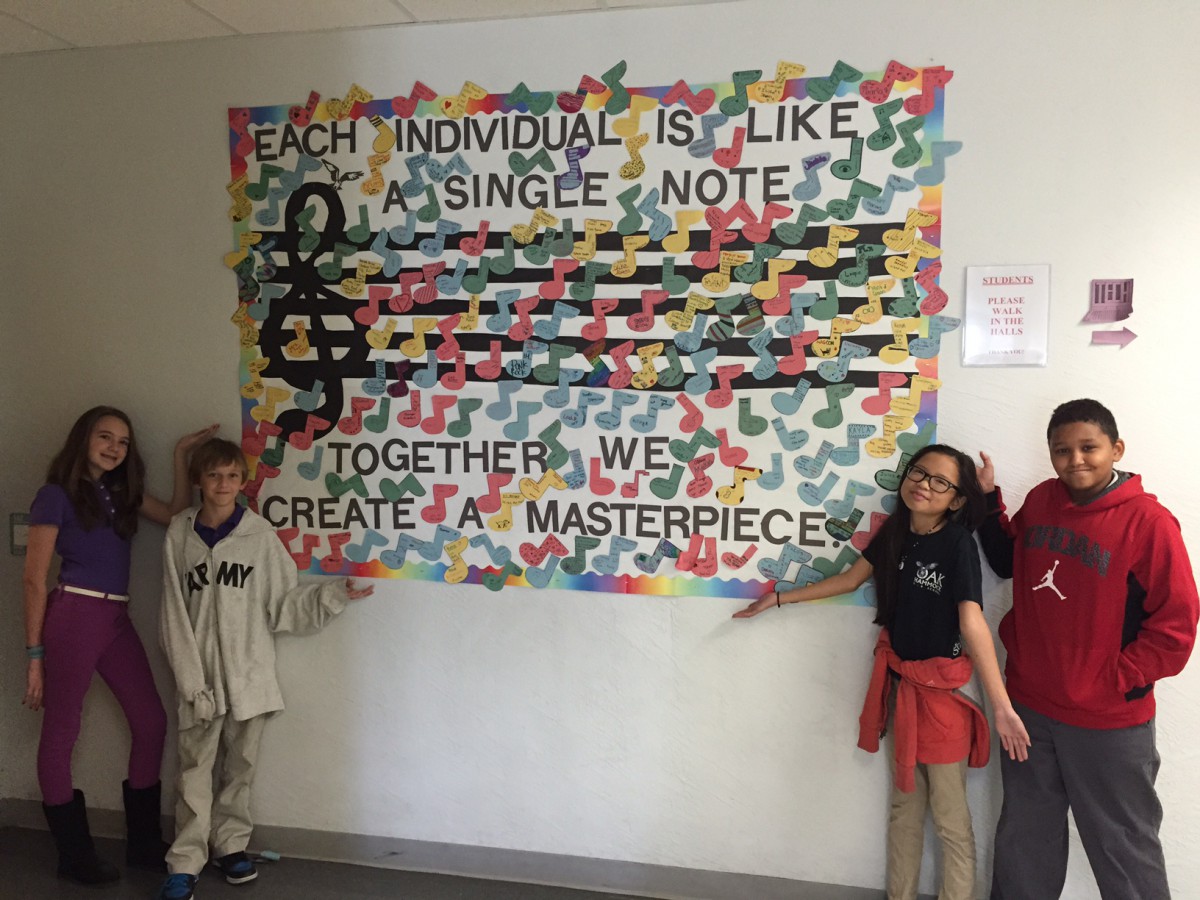 Be the One: Kids at Hope Day at Oak Hammock

To celebrate Kids at Hope Day 2014, Oak Hammock K-8 School implemented an anti-bullying campaign from November through January that empowers all Treasure Hunters and students to find the treasures in all members of the school community. Our personal rendition of the 2014 Kids at Hope theme: “Everyone a Treasure Hunter: Be the ONE to Stand up to Bullying!”

This campaign kicked off with a “Hats Off to You” fundraiser, where students and staff paid $1 to wear a hat on campus. Students were asked to identify their own talents, skills, and intelligence, as well as the treasures in their friends and family.

Next was a school-wide reading of the book One, by Kathryn Otoshi in each classroom. One is a simple yet powerful anti-bullying picture book that has many levels of meaning, making it accessible to students from Pre-K through 8th grade.

Then in January, staff will be trained on strategies to help students mentally time travel to the four destinations. Students’ and staff’s future dreams will be shared to further support connecting across our school community and see the treasures in one another.

We will be closing our campaign with the school-wide signing of a pledge to be a Treasure Hunter by seizing Moments of Truth to stand up against bullying. Students who agree to be the ONE to stand up to bullying will sign the pledge and receive a blue dot sticker as a symbol of their commitment to being a Treasure Hunter for others. 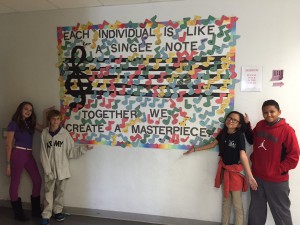 Hailey Mack, Mikey D’Andria, Jenny Nguyen, & Caden Deis stand next to the bulletin board created in band. Students focused on individual talents and compared it to how, just as in music, many different notes come together to create a masterpiece. 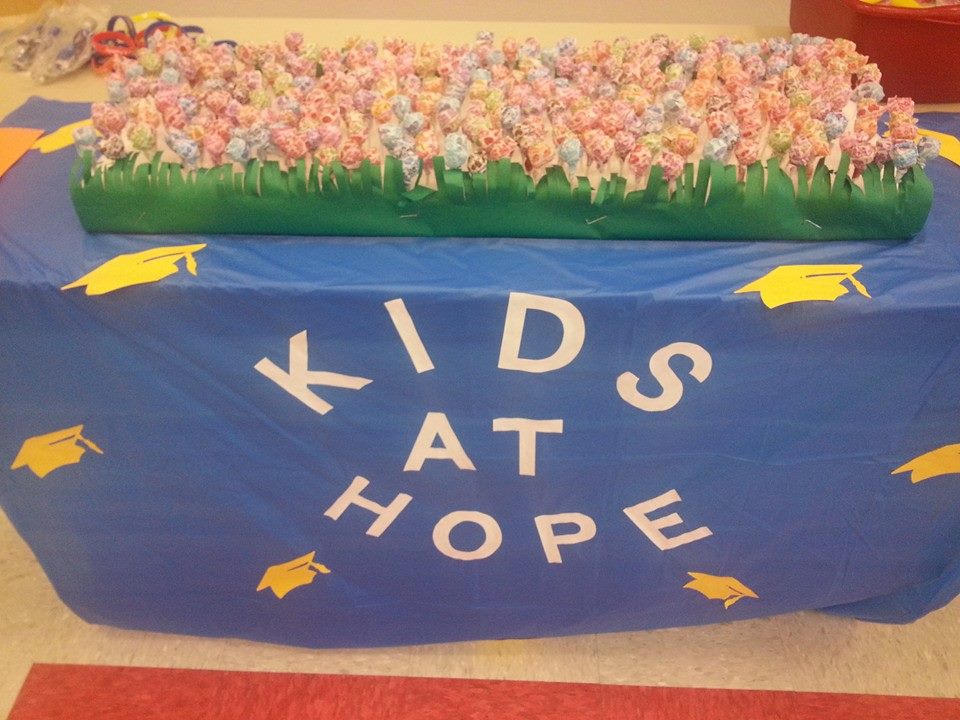 Samuel S. Gaines Academy celebrated National Kids at Hope Day during the week of November 10th – 14th.  Staff and students proudly showed their Kids at Hope spirit by wearing Kids at Hope shirts or any blue and yellow shirts during the week. Each day, students discussed their Aces on the morning announcements. Students held up a poster-sized Ace card, described their Ace of Hearts, Clubs, Diamonds, Spades, and explained why they are important. A faculty member also gave a special “tip of the day,” focusing on the power of Aces in student’s lives. In addition, positive signs were posted around the school, stating “Keep Calm. You’re a Kid at Hope.” During a school-wide parent event, a lollipop tree was used to encourage conversations between parents and children. Students picked a lollipop, brought it back to their parent, explained their talents, skills, goals and dreams. If they chose a lollipop with a blue or yellow sticker, they won a special Kids at Hope prize, such as a light or bracelet. Students who picked one without stickers were still praised for being winners. Parents then heard a presentation about Kids at Hope and students recited the Pledge. Parents were informed about activities and dialogue they can have with children at home to foster positive relationships and hope for the future. 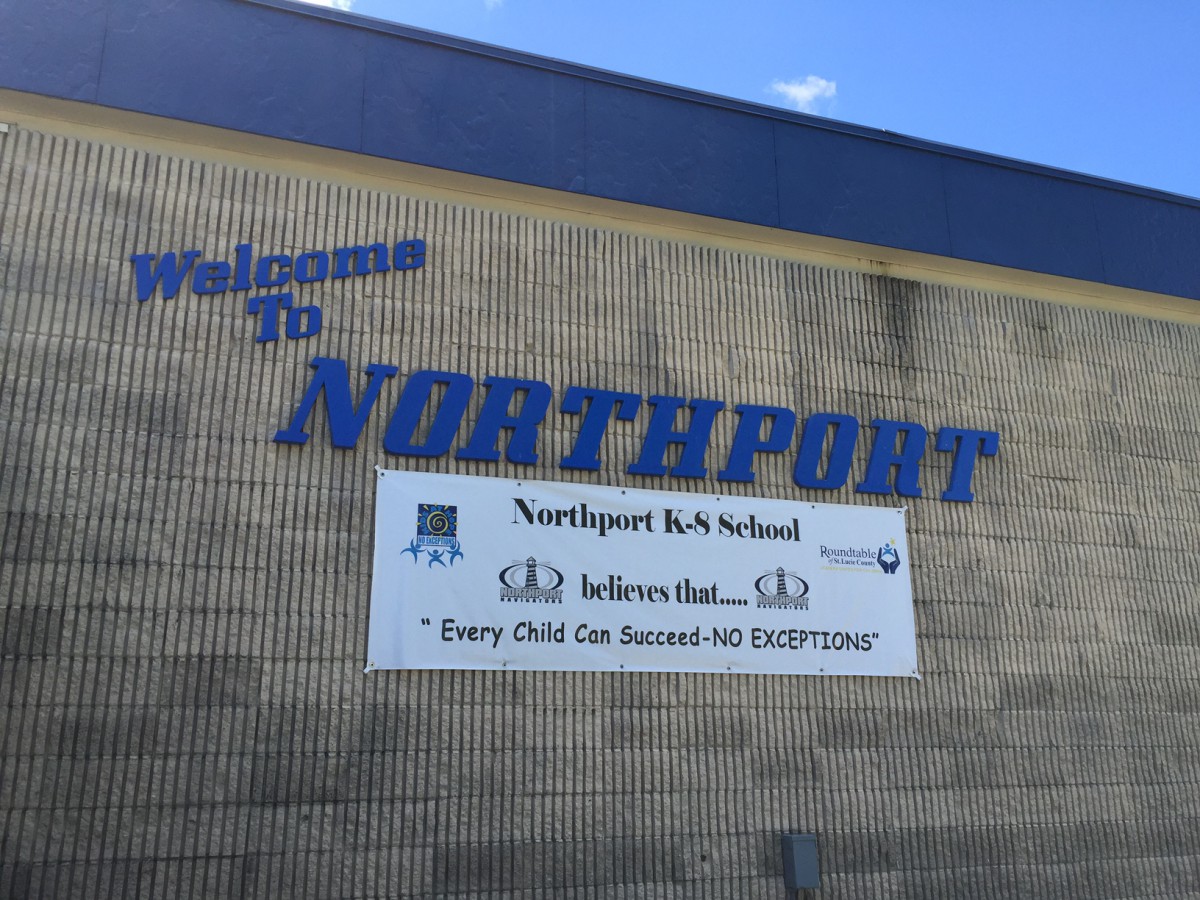 Northport K8 School celebrated National Kids at Hope Day by infusing a Power of Aces mini-lesson into morning (elementary) or 1st period (middle) on November 12th. The suggested activity included a class discussion on students’ Ace of Hearts and Ace of Clubs and why these adults are important, followed by writing thank-you cards to these Aces. Lessons also incorporated this year’s school theme, “Kids in Wonderland.” During drop-off and pick-up, parents received an Ace of Clubs card with an explanation about this special caring adult, as well as a copy of the Treasure Hunter’s Pledge.