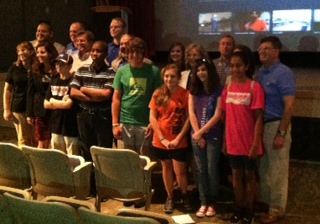 Two teams of students participated in the 5-week summer program held at Southern Oaks Middle School. Kevin McInerney and Brian Jones facilitated the teams to learn about and write programs that could control satellites in space.  The participants competed with 26 other teams across the nation to win a technically challenging game by programming their strategies into a SPHERE satellite.  A series of elimination tournaments were conducted with astronauts on the International Space Station and the event was broadcast to participants who gathered at sites such as MIT in Massachusetts and Cape Canaveral in Florida.

The St. Lucie 2 Team reigned victorious. This is truly a stellar accomplishment!