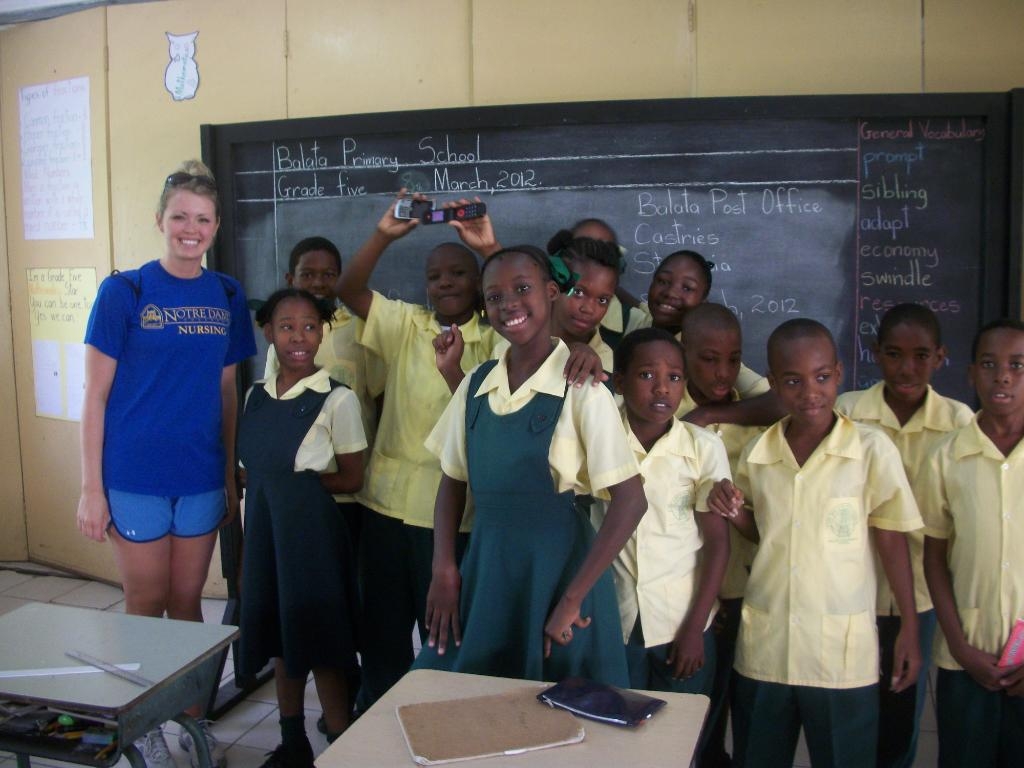 Manatee Academy K8 newlyweds Caleb Bihari and Ashley Drum spent part of their honeymoon teaching impoverished children on the island of St. Lucia.  Their experience was made possible by the Sandals Foundation and their “Reading Road Trip” excursion.  Every Thursday a van leaves the comfort and luxury of the Sandals resort to go to Balata Primary school in Babonneau.  Volunteers sign up in the resort lobby for the opportunity to interact with the faculty and students and see what schooling is like for children in St. Lucia.

“When I heard that this was a possibility I absolutely wanted to go,” Bihari said.  “It isn’t often that I am out of the country and have a chance to visit a school.”

When the couple arrived after a forty-five minute van ride though winding mountainous roads, they were shocked at how different it was from a typical school in Saint Lucie County.  Parts of the building were surrounded by a barbed wire fence to prevent thieves from stealing books and computers.  There was a huge container behind the school that collected rain water from the gutters.  This was their water supply.  Classrooms were open-air.  There were no doors or windows, just large openings in the concrete walls.  Feral dogs and cats, along with chickens freely roamed the premises and “A chicken walked into class as I was teaching!  It was crazy,” says Caleb.  There was no cafeteria, but there was a kitchen where a cook came in and made lunch for the K-6 school of about two-hundred students.  Students who choose to purchase a lunch may do so for 1 EC (Eastern Caribbean dollar).

Caleb, Ashley, and four other volunteers toured the school, met the staff, and were introduced to their classrooms for the morning.  “We got to meet the faculty and principal and when they found out that we were teachers back in the states they were so excited.  Instead of just reading or talking to the students, they told us we could teach any lesson we wanted,” said Drum, a fifth grade teacher.  “I gave a quick lesson review on friendly letters and had the students write to my class at Manatee.  I have the address of the school and plan for my class to start a pen pal relationship with those students for the rest of the year.”

Caleb, a first grade teacher, read and taught a mini-comprehension lesson to the second grade class he was visiting.  “I was surprised at how well behaved the students were.  They called me ‘sir’ and always raised their hands to be called on.  Not one student shouted out the whole time I was there.  I was also a little surprised at how smart the students were, they had excellent vocabulary and very fine tuned writing skills.”

At the end of their lessons, the Manatee teachers passed out books and school supplies that they had brought along to donate.  “The kids went crazy,” Ashley said.  “We brought a few packs of pencils and paper and about 50 books and everyone was so excited, like it was Christmas morning.”  “That is when it really hit home the most that these students have a rough life,” Caleb added.  “I got the sense of that when I first arrived at the school and saw just how different it was from what I am used to in Florida.  But when I showed the class the books I had brought, you could tell it really made a difference for them.  The simple things we don’t even think about meant the world to those kids.  It was a really powerful experience.”

“One of the highlights of our honeymoon was going to that school and having the opportunity to teach students who come from a whole different world than what I am used to,” says Ashley.  “Both Caleb and I were touched by this experience and made us realize how lucky we are to be teachers.”  Caleb adds, “I will never complain about lack of resources or funds again because we are lucky with what we do have.  Those teachers have to come up with everything on their own and if they want something they either have to buy it or hope more donations will come the next Thursday they have visitors because their school just doesn’t have the funds.  It was both eye-opening and rewarding and definitely something I will always take with me.” 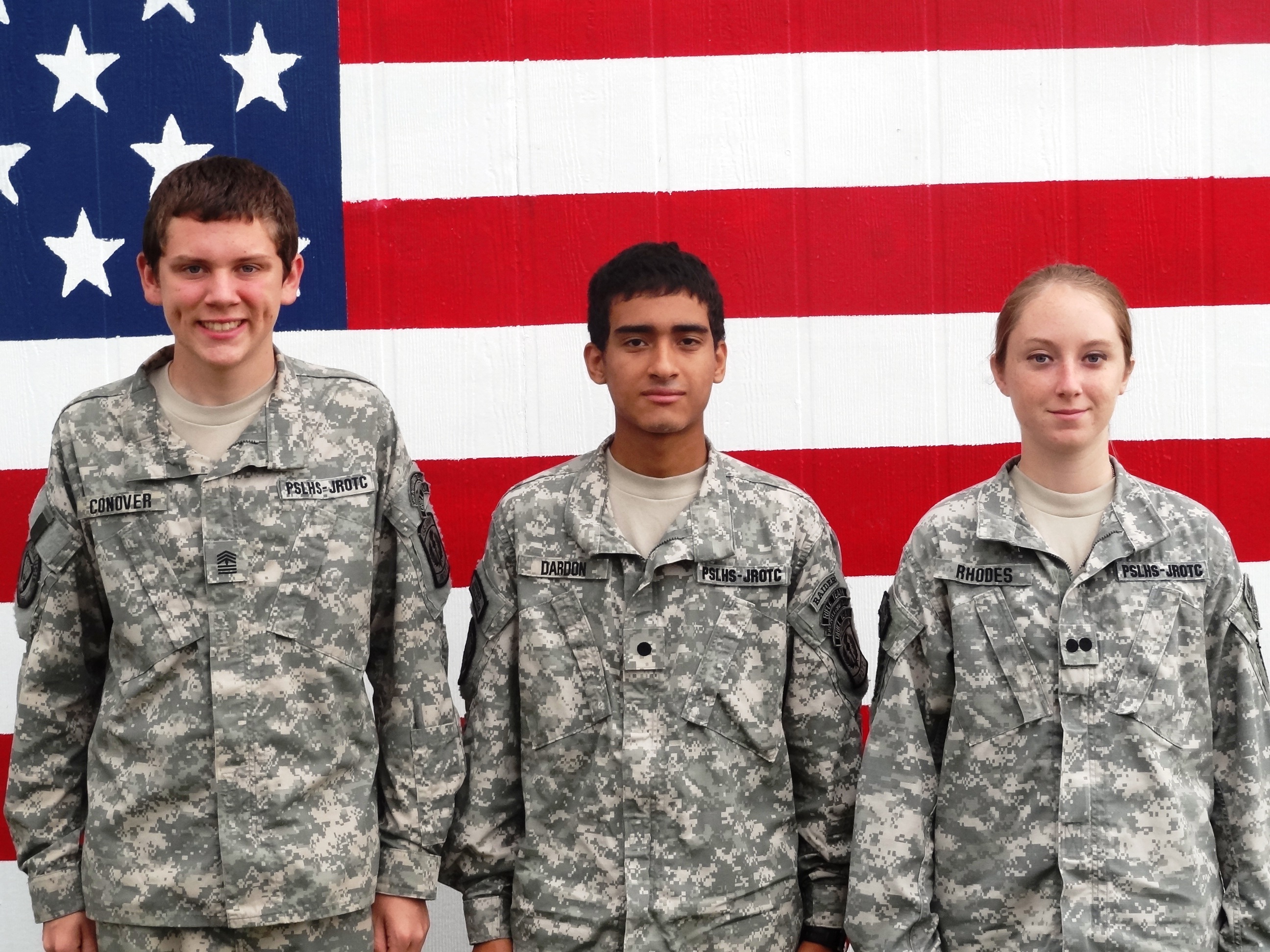 Three Port St. Lucie High School ROTC Jaguar cadets have been selected to attend Florida’s American Legion Boys’ State and Girls’ State, the starting point for many successful young people. These programs are coordinated by the American Legion, and thanks to Post 318, cadet First Sergeant Troy Conover and cadet Second Lieutenant Jeremy Dardon have the opportunity to travel to Florida State University in Tallahassee. Cadet First Lieutenant Devynn Rhodes will also be traveling to Florida State University to participate in Girls State. She was selected by Rita Woodburn, Girls’ State Chairperson for American Legion Post 318 Ladies Auxiliary. Delegates’ rooms are provided by Florida State University, and the delegates are given a tour of Florida’s capitol building. Boys’ State and Girls’ State are two rigorous and comprehensive leadership programs where students learn about Florida’s politics and government. High school juniors are selected to participate in the program, and expenses are paid for by the American Legion Post or local organization sponsoring them. While learning about the government and politics of Florida, the cadets also get the opportunity to receive high school and college credits. Overall, it is a great experience for the cadets, and Port St. Lucie High School appreciates the continuous support of American Legion Post 318 and the Ladies Auxiliary of the American Legion. Pictured, from left, are cadet First Sergeant Troy Conover, cadet Second Lieutenant Jeremy Dardon, and cadet First Lieutenant Devynn Rhodes. 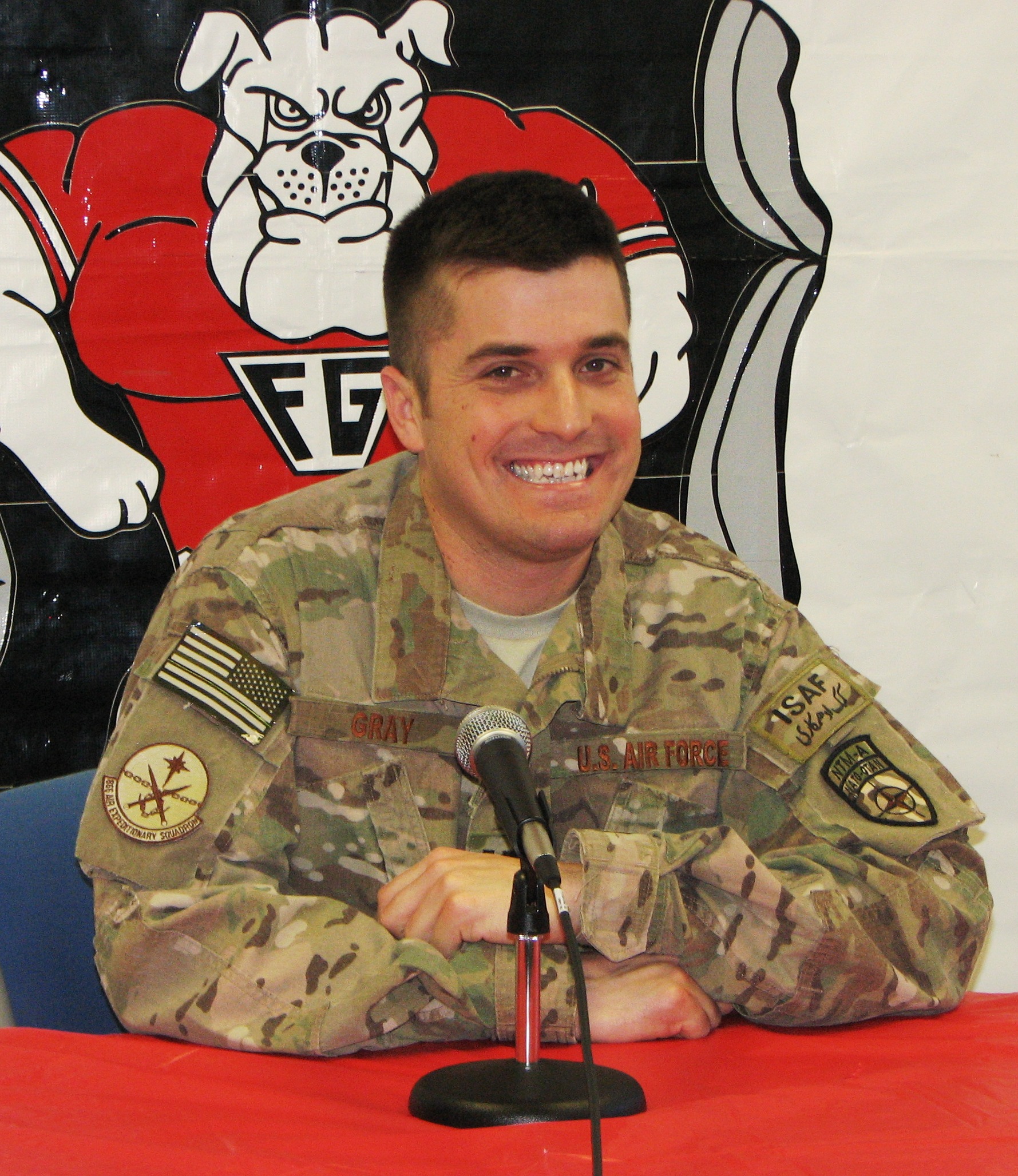 Sixth grade Panther team students at Forest Grove Middle School had the unique opportunity to welcome and honor a returning veteran,  Captain Brandon Joseph Richard Gray, USAF. Captain Gray is the son of Rik Gray at Lincoln Park Academy and Pam Gray at Forest Grove Middle School. Captain Gray has just returned from a six-month tour in Afghanistan. He wanted to visit the school to thank staff and students for all of the cards, letters, and gifts that were sent to him and his troops during his deployment.  Sixth grade Language Arts teacher Ilyssa Greene sponsored the outreach. Students have been thrilled to receive letters as well as several service coins from the soldiers in response to their efforts.  The students have gone above and beyond to show their appreciation for military troops. Pictured is Captain Gray as he is a guest on the school’s morning news show. 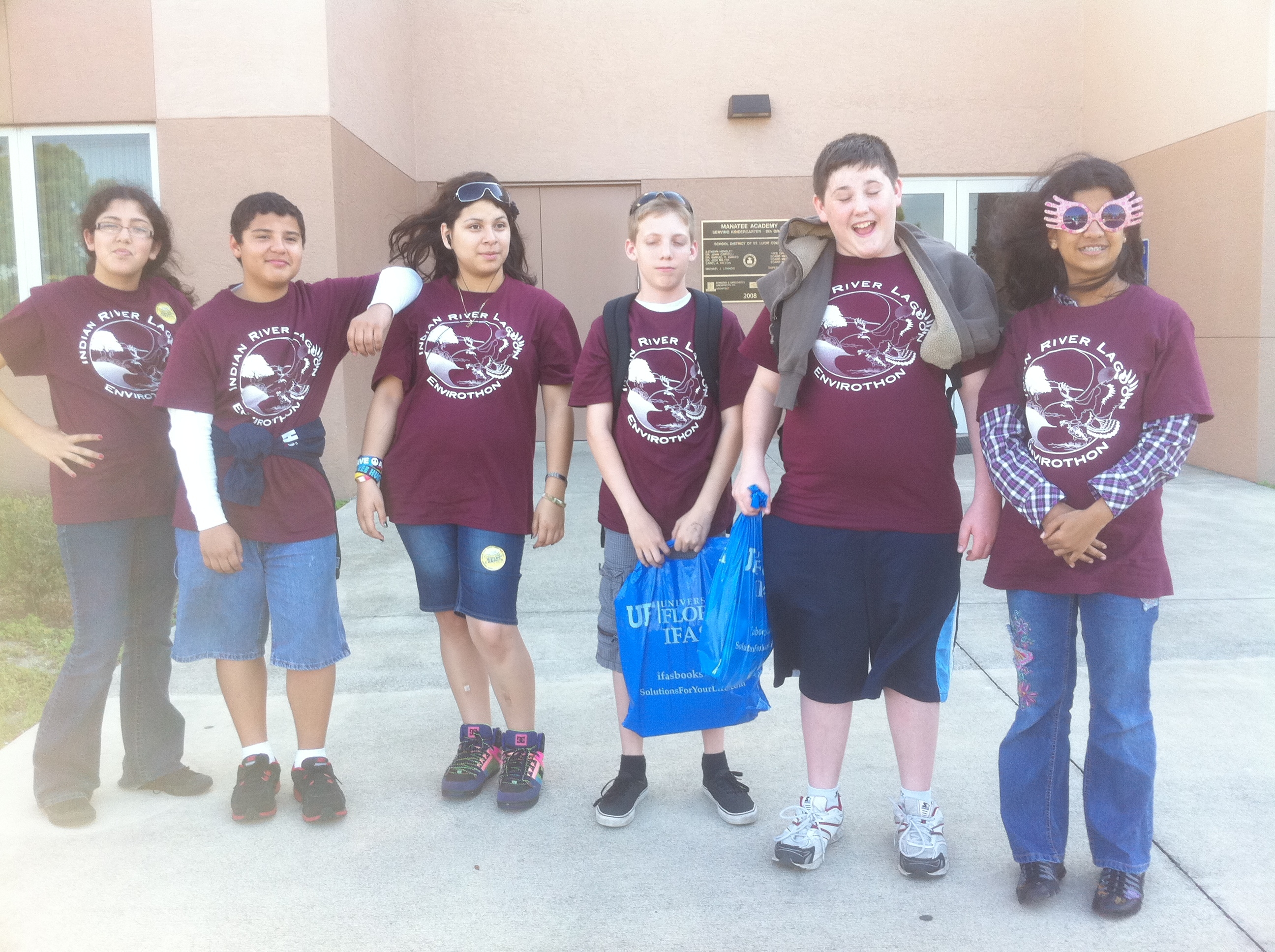 The Manatee Academy K-8 Purple Pirate Monkeys Envirothon team, coached by Richard Maller and Judith Nova,  took first place for the Indian River lagoon category at the recent Regional Envirothon Competition. The Envirothon is a nationally based competition for middle to high school teams of students which promotes environmental awareness, science skills and research. The Purple Pirate Monkeys have been working in partnership with local members of the Divisions of Environmental Protection and Forestry, and the Savannas Education Center for the past two years, and have had several division awards during the past two regional games. Pictured, from left, are Samantha Lumbi, Louis Dominiquez, Elena Mena, Nicholas Drew, Frank Reynolds, and Jennifer Alles. 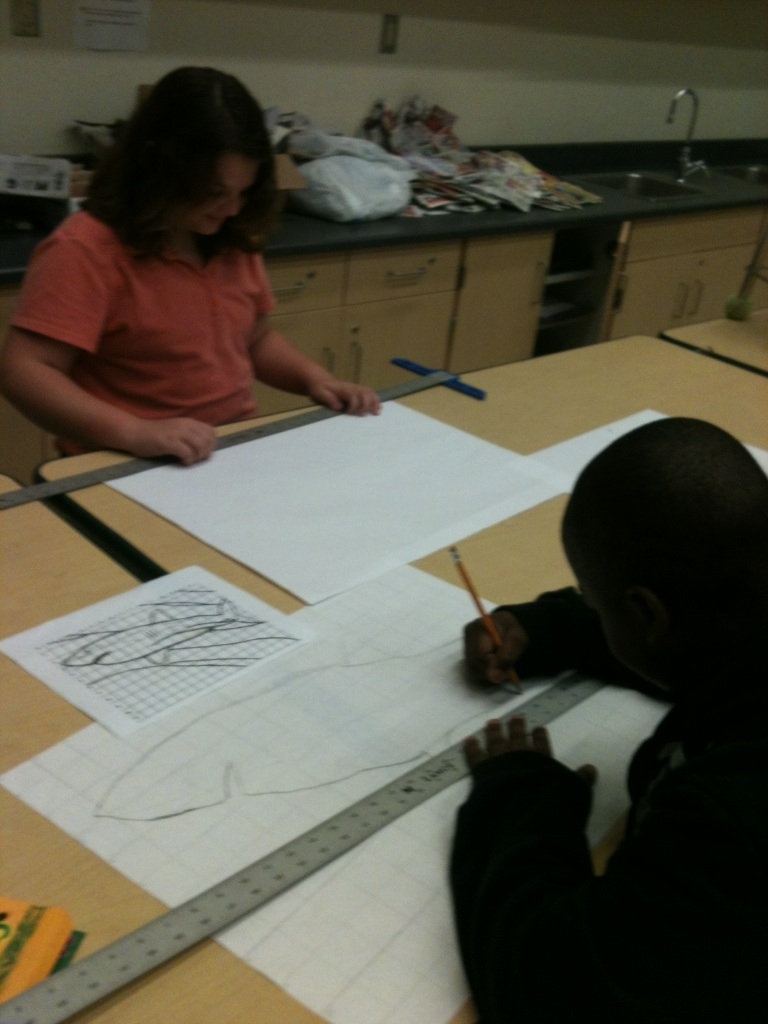 Fifth grade students in Tekia Montgomery’s elementary art classes at Allapattah Flats K-8 are re-introduced to the concept of enlarging.  They will create enlarged drawings from small pictures using a grid technique. Students will use T- squares and work together to make a large grid where they will transfer their original drawings into a larger scale. This year’s theme is under the sea. This particular project is done every year, and although this project is a bit of a challenge for the students, it seems to be a favorite! Pictured are Calendra Holbrook and Jorge Liberate taking their time with their underwater creations.